An estimated quarter of the population is believed to have some form of mental illness. 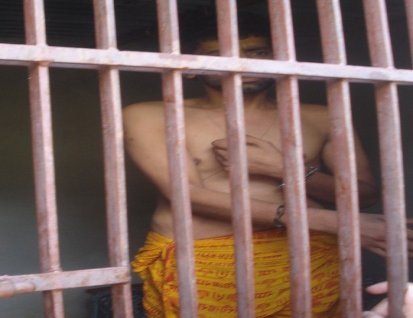 Prem spends his days walking the streets.  He is young, intelligent, and crippled by mental illness. His violent outbursts make for a stark contrast to Bhaktipur’s quiet old town.  The abnormal behaviours are ignored by the public, but if you talk to Prem he is lucid enough to suggest there is hope for recovery.  He tries to smile but the voices he hears taunt and abuse him constantly.  They threaten him so much he sometimes carries a knife.

I asked around.  The closest mental health services were in Kathmandu and neither Prem nor his family could afford the treatment or time that he needs.  Prem’s case is sad, full of potential and one that would not need a great deal of intervention to change.

Shradha’s is a different story.  Shradra was raised in the western villages of Nepal and, after having two children, began to show signs of bipolar disease.

“I remember shouting often, and sometimes I became so tired I could barely move.  My family had taken me to a faith healer many times.  They bound my hands and covered my mouth.  Sometimes he poured hot water on my head.  If I shouted too much in the car they would leave me in the jungle for the night.  This happened many times. I saw two others like me in the village, tied to trees or locked in their room all day.  I was afraid this would happen to me.”

Shradha was found by Kopila-Nepal, an NGO seeking to improve the lives of those suffering from mental illness.  Kopila brought her to a hospital in Pokhara where she received two weeks of treatment and was given medication and counselling.  The latter two were provided by the charity, which also supported the family to understand the nature of mental illness.  Now Shradha works for the NGO and has regular contact with her children.

“Without Kopila, I would be living on the streets, if I were still alive at all.”

When we met, she had just been liaising with police and family to prevent a suicide and have an abusive husband arrested.

“Nepal is changing,” she explained.  “In my generation, girls could be married at the age of 4.  I know women who have been widows since they were 7 years old.  Our society has traditionally been very restricted and narrow – especially about sexuality.  Younger people are having more and more contact with the western culture, but they can’t talk about how or what they feel.  They want love marriages but this is new for us.  It confuses them and they don’t know what to believe.”

“We provide counselling in the villages but this requires several years to build trust and rapport.  Many people simply don’t know how to talk about themselves or what they feel.  Abuse is common and mental illness is treated as something demonic or to be locked away.”

Bina sees how complicated the problem is: “We find a family at risk and it’s difficult to know where to start.  Abuse, addiction, poverty, discrimination, lack of education – they’re all interlinked and you invariably can’t treat one without dealing with the other.  Drug misuse is becoming an increasing problem for us and NGOs need to have a holistic approach to solving these problems.”

Bina explained one case of a young, mentally ill man, who had been tied to a log for 13 years of his life.  After persuading his family to free him, Kopila took him for treatment in Pokhara, an opportunity unheard of to many remote villagers due to distance and cost.  In just three weeks, his mind began to heal.  It took his leg three months to recover.

“It is testimony to the mind’s resilience,” Bina explains.  “It does not require a great deal of resources to support people in need, but mental health receives less than 3% of the national health budget. Our government must respond better to the needs of its citizens.”

Everything is not bad. Good intentions governed Nepal’s Mental Health Policy in 1996, which outlined principles of accessibility, awareness, and the protection of human rights.  Unfortunately such intentions did not govern their implementation.  A World Health Organisation (WHO) Assessment in 2006 noted marginal progress on all points, with major deficits in Nepal’s mental health infrastructure.  Nearly twenty years on, has this system finally reached its adolescence?  New Spotlight journalist Adam Greiner speaks to leading NGOs.

Getting Started: A Difficult Labour

Mental Health simply doesn’t get priority in a country beset with priorities.  Politically one of the youngest nations in the world, the challenges that Nepal faces in its health system are vast and complicated.  Bir Hospital first opened 10 psychiatric beds in 1965 and, to government’s credit, such services have bloomed to 520 beds across the country.  With limited resources, however, these services inevitably become specialised to psychiatric hospitals, all of which sit in urban areas.  In population terms, this equates to approximately 2 beds for every 100,000 people living in Nepal, the majority of whom would be geographically disqualified from access due to rural habitation.

SushmaRajbanshi, Health Team Leader for United Mission Nepal explains that, “even with access, many urban people still fear seeking out such services because of the stigma involved in mental illness.  This is somewhat different from rural areas where people simply don’t understand what mental illness is.  Our two biggest challenges are raising awareness and integrating a better-skilled mental health workforce into the wider health framework.”

A Human Rights Failure: Recognising the Urgent Need for Growth

In Nepal, suicide has been identified as the leading cause of death among women of reproductive age.  Combined gender and health inequalities place women particularly at risk.  With no legal protection, women are often divorced and abandoned when mental ill health emerges and, if not for a handful of NGOs, would have no means for reintegration into society.

Women are not the only vulnerable members of Nepalese society.  Growing concern is being raised in Nepal’s migrant worker population.  Many men are forcedto go abroad in search of work.  With practically no rights, they work long hours under strenuous conditions and return to Nepal traumatized.  Despite their invaluable financial contributions to the family and the state, these men find little to no support outside of NGOs.  Continued deterioration very often leads to breakdown or suicide in this forgotten segment of society.

An estimated quarter of the population is believed to have some form of mental illness.

Just 2% of the national health budget is designated for mental health, and within this allocation most is spent on psychiatric hospital care.  A Mental Health bill has been drafted but not yet endorsed in the parliament. It would further centralise funds and training to specialised hospitals which,Sushma argues, defeats the point.  “I agree with many of the government proposals, but what UMN advocates for are local, multi-disciplinary teams.  Every primary care facility should be able to support someone who comes to them with a mental health need.”

Such a view would bypass Anglo-American history, which saw the closure of large-scale, segregated institutions for the mentally ill in the 60s and 70s.

From Psychiatrists to Faith Healers: Working Together for an Integrated Future

Of the hundreds of NGOs found in Nepal only 19 are dedicated to mental health.  Resources are scarce and competition inevitable.

Some NGOs, like Richmond Fellowship Nepal, have already incorporated a multi-disciplinary approach in their work. Bishnu Sharma, Programme Manager for RF, manages drug and alcohol rehabilitation services across the country and provides onsite psychological interventions.  A therapeutic, holistic spirit also pervades their recovery model.  “This is essential.  Almost a quarter of our clients have some form of mental illness.”  Adam Lane, London-based International Development Officer for RPFI, toured several rehabilitation centres in 2013.  “I was very impressed with what I saw.  Services like RF Nepal are few and far between.  They should be commended for their work.”

The WHO estimates 450 million people worldwide have some form of mental disorder: with depression likely to be the second highest contributor to global diseases, and causing 90% of all suicides due to poor mental health. Yet mental health simply isn’t given priority worldwide.  In Nepal, where faith healers remain the primary care contact for most rural people in the country, Nepal’s mental health infrastructure is still nascent but growing. One positive step forward is that the Ministry of Health wants to listen.  It recognises the expertise of NGOs and is organising a committee to review the proposed legislation and seek a better way forward in Spring 2014.

But is this enough?

Nepal has an unfortunate, consistent history for making well-intended laws it lacks the capacity to enforce.  Ideally, there would be no mental health NGOs in Nepal.  As Sushma explained, “mental health affects every aspect of wellbeing. If international NGOs such as those for women’s health or orphans see mental health support as fundamental to quality of life, our goals could be more easily achieved. She went on to say that should mental health be introduced in schools, in one year 500,000 students could be reached.

An integrated system would see every primary care facility equipped to support those with mental illness.  Along with better awareness and advocacy, this preventative approach would see mental health support delivered to a much wider population, dramatically reduce hospitalisation costs, and save lives.

36 People Die Due To Dengue By Agencies 2 days, 4 hours ago