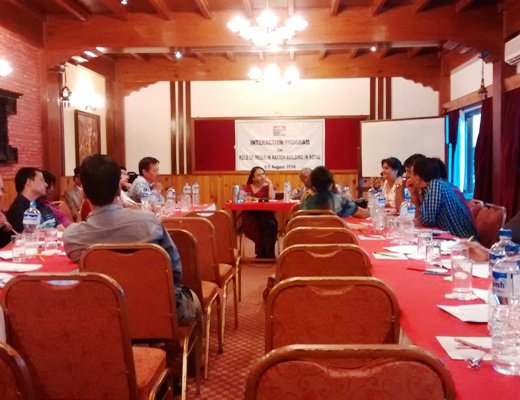 When every institution of the country weakens, the state weakens and the society will be in a mess. That is when the role of media becomes all the more important to disseminate the information that the citizenry needs.

As Nepal is in the process of constitution making through Constituent Assembly, there is the need of more debates and discussions among the citizenry to support the constitution building process, which will ultimately help build the nation.

At a 2-day function, organized by FES, journalists representing various media organizations shared their views about writing and reporting and media’s role in nation building. Moderated by journalist Aarati Chataut, the event heard a presentation by head of FES Nepal office Dev Raj Dahal on thematic aspects of media.

“A nation survives so long as groups of people maintain their memory through constant communication and interaction across various generations of people for the creation of a more inclusive political system,” said Dahal, head of FES Nepal office. “The Universal consciousness of modernity fostered by communication revolution has provided Nepali citizens and leaders to explore opportunities in a corresponding manner to maintain Nepali Identity.”

Dahal said, "Nation-building requires the liberation of human energies to make a leap into modernity through the use of analytic, discursive and problem-solving approaches furnished by Nepal media. Nation building cannot be stable if it does not reflect the historical potential of its culture, social capital, and practices and ability to conduct diplomacy at multi-polar fronts.”

As all other sectors are in a chaotic situation, Nepal’s media can play a very important role in the present process. “In the process of making the new constitution through the CA, present CA is trying to write the constitution without involving the people at every stage. Thus, the role of media is very important to disseminate the accurate discussion taking place inside the Constituent Assembly,” said Kashi Raj Dahal. "Constitution writing process involves many thorny issues, media must report on the quality of discussions taking place inside the CA.”

Political scientist Lal Babu Yadav said: “Nation belongs to all the citizens. Nation building is all about brining all Nepali together. Media need to caution about presenting fragmenting views in the name of inclusion. The new constitution must be inclusive but it does not mean that it encourage hate against each community. Political forces are championing divisive cause but media have to show the harmony among communities. Nepal as a nation belongs to us. I am Nepali then only I have Madheshi or other identity.”

With the limited capacity and knowledge, Nepalese media are carrying out their job in the constitution making process, discussing state restructuring to forms of government and structure of judiciary and the diverse views political parties hold on the issues.

“Media need to be more cautious about the constitution writing process,” said Journalist Kanak Mani Dixit. Media can be effective only when they report accurate discussions and disseminate these to the public.

Similarly, former editor of Gorkhapatra Daily Sitaram Agrahari, editor of Nepal Samacharpatra Tanka Panta and journalist Hari Kala Adhikary stressed the need for media to be sensitive about issues of gender and identity. Journalist of Kantipur Hari Bahadur Thapa said that there is the need to strengthen the institution to build the nation. Editor of Himal Kiran Nepal said that the time has come for media persons to do a retrospection on their role.

Media need to be objective, firm and fair in playing their pivotal role of watchdog and help stabilize the democratic process in state-building. Therefore, the role of media in shaping the public opinion cannot be overemphasized and it must, however, be socially responsible to the citizens in order to bring about the positive change in society. It is also stated that journalism has never been free from challenges and threats, but it may be a good idea for all the senior journalists to sit together and analyze the state of journalism and challenges it faces in Nepal today.

EP DELEGATION Visit For Cause By A Correspondent 10 hours, 20 minutes ago