The Dean of KUSL, Dr. Bipin Adhikari, opened the ceremony with a short speech on the goals and interests of KUSL and what he hopes the integrated BBM,LL.B (Bachelor of Business Management & Bachelor of Law) programme will achieve in the years to come 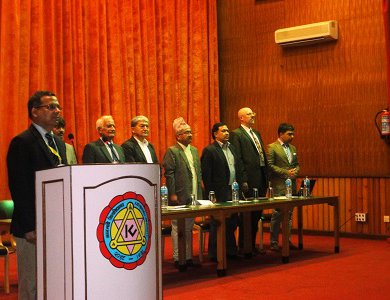 11th of August, 2014, marked the launch of the first undergraduate programme of the newly-established Kathmandu University School of Law (KUSL).

The launching ceremony, which was held in the CV Raman Auditorium at the main campus of Kathmandu University in Dhulikhel, saw a turn out of around 175 people. The admitted students, their parents, the University’s top-most persons, and a couple of speakers from abroad enjoyed a nearly three-hour ceremony followed by a light lunch prepared by the KU kitchen itself.

The Dean of KUSL, Dr. Bipin Adhikari, opened the ceremony with a short speech on the goals and interests of KUSL and what he hopes the integrated BBM,LL.B (Bachelor of Business Management & Bachelor of Law) programme will achieve in the years to come. He highlighted how KUSL would meet the important demand of quality lawyers in the country through its integrated course of business and management with the law.

Following Adhikari was Dr. Suresh Raj Sharma, the founding Vice Chancellor, who, among other things, spoke of the University’s struggle of establishing itself in the early 1990s. He spoke about the questions of dignity and quality that Kathmandu University had to answer, keeping in mind the existing, government-run universities of the day. He emphasized the need to carry on the quality education at KU to KUSL as well.

Then, the audience heard from Hari Krishna Karki, senior advocate and vice chairperson of Nepal Bar Council, who highlighted, numerous times, the importance of qualifications as a lawyer in order to meet the demand for quality lawyers in the country. He encouraged the students to give the course their best, and work towards becoming the strongest, most well-trained lawyers they can be.

Karki’s speech was followed by that of Justice Kalyan Shrestha of the Supreme Court, who appeared as the Guest of Honour. His appreciated the efforts of the KUSL and the offer of the BBM, LLB course as an interdisciplinary course in legal education. However, he pointed out that establishing a forth school of law in the country wouldn’t make a difference if it does not establish quality in its approach. He appreciated the leadership of Dr Adhikari as the Dean of the newly established School, and expressed his confidence that the Kathmandu University is going change the scenario.

After Karki’s speech, the Vice Chancellor, Dr. Ram Kantha Makaju Shrestha, lit the panas, a kind of diyo with the embellishment of Ganesha, which signifies the light of wisdom that the University will be graced with. Kantha went on to talk about his high hopes and his belief that KUSL will succeed in delivering well-trained, open-minded individuals in the near future.

Following the VC’s speech, one of Chicago Law School’s professors, Tom Ginsberg, spoke on the subject of the role of law in society. He emphasized the role ethics plays and should play in making legal decisions. He emphasized that lawyers today need to have a broad knowledge about various different issues while still having a deep understanding of law because of the way our world has come to function with an interdisciplinary agenda. He appreciated the course on offer and wished his good luck to the University.

Finally, from the International Institute for Democracy and Electoral Assistance (IIDEA) in Sweden, Sumit Bisariya, the Head of the Constitution Building Programme, highlighted the important distinction between law and the Constitution, and established that a Constitution ensure the rights of all citizens and instead of restricting them, like law does, allows them to move forward. He encouraged the students to study with an open mind and know that they will become the bringers of social change as future lawyers and contribute to nation-building themselves.

The ceremony was a success overall. Students left the hall with a buzz of excitement for the initiation of their classes the following morning, on the 12th of August, 2014.

As the sun shone on over the green fields of Dhulikhel, and the audience mingled with each other, exchanging their words of appreciation and wishing the KUSL team success in the days to come, it looked like the launching ceremony couldn’t have unfolded more perfectly.

PM Deuba Received A Telephone Call from US Secretary Of State By NEW SPOTLIGHT ONLINE 3 days, 10 hours ago