A study conducted in the Annapurna region reveals how women participation in eco-tourism can make change in gender, trade and green growth in Nepal 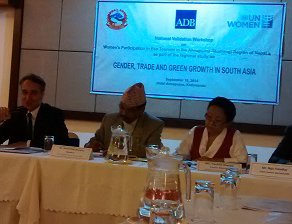 Although this is just a small research taken to look at how eco-tourism is making change in gender, trade and green growth in Nepal, particularly in Mustang, it reveals many things about the contribution of eco-tourism in the life of women living in highland mountains.

“As we are promoting more eco-friendly tourism in Nepal, encouraging women, marginalized communities, this study has great significance,” said Suresh Man Shrestha, secretary of Ministry of Culture, Tourism and Civil Aviation. “In the mountain areas, Nepal has great potential for eco-tourism. Along with the current traditional destinations, we need to explore more. UN Women and ADB have taken the right step looking at this unique aspect,” said secretary Shrestha.

Although tourism is regarded as a major sector to transform Nepal’s economy, it is yet to be gender friendly. The study conducted by Saloni Singh has revealed many interesting aspects.

The study was made as a part of the regional study on gender, trade and green growth in South Asia where speakers highlighted various aspects of women participation in eco-tourism.

The impact of trade liberalization is different for different sections of the population, often exacerbating inequalities in the absence of counteractive measures and barriers.

“The study taken in four countries of South Asia, Nepal, India, Bhutan and Bangladesh looked at the role of women in the context of trade liberalizations in the region,” said Shreyasi Jha of UN women.

“The objective of UN Women is to accommodate the views of different stakeholders as possible in the report so that it helps the policy formulation in coming days,” said Ziad Sheikh, country representative of UN Women.

“As there is a growing interest in green industries as a key driver of economic development, the focus is on the gender aspects of trade in products and services from green industries, with the objective of identifying women’s potential niches and increasing their participation in the production, marketing, and trade of green products and services,” said Saloni Singh in her study report.

As those involved in eco-tourism are earning more, there is a vast income gap.  “Families engaging in ecotourism are getting richer and families relying in agriculture are getting poorer, signaling disincentives to do agriculture,” said Singh.

“In ecotourism, men’s work is valued as ‘big job’; while women perform multiple ‘small tasks’ resulting in heavy workload of women due to ecotourism  but men control the money and women are dependent on men economically and  women lack the decision making power within the family,” said report.

An Economy model shows constant improvement in living standards for most of the people.  “Usually, only Ministry of Women talks about the Gender Equality issue but for the first time Ministry of Culture, Tourism and Civil Aviation is initiating a solid work to address the women’s economic empowerment issues, this is so encouraging,” said former minister Yankila Sherpa. “ADB and UN Women have made a great contribution initiating such an innovative work.”

“The Ministry is drafting the Tourism Strategy and the Plan of Action, so I would welcome the inputs. If UN Women can facilitate to ingrate gender component in this particular policy document, the Ministry is ready to integrate even adding a chapter,” said Mohan Sapkota, joint secretary of Ministry of Culture, Tourism and Civil Aviation.

There is the need to integrate the gender in the tourism sector. “This program can help integrate gender,” said Vidya Hirachan, executive member of TA and coordinator of Ecotourism.

“If they can better train themselves, they can train other rural young girls and promote tourism,” said Churim Sherpa, a young Climber of mountain Everest and Guiness award winner.

NEPAL-INDIA Bonds Across Border By Keshab Poudel 1 day, 1 hour ago

India Open To Engaging With Nepal In An Environment Of Trust And Confidence: MEA Spokesperson By NEW SPOTLIGHT ONLINE 2 days, 12 hours ago