Known for his hard stand against the recent move by the UCPN-Maoist alliance, CPN-UML leader K.P. Sharma Oli has defended the decision taken by CA Chairman Subas Nembang. Excerpts of Oli’s remarks: 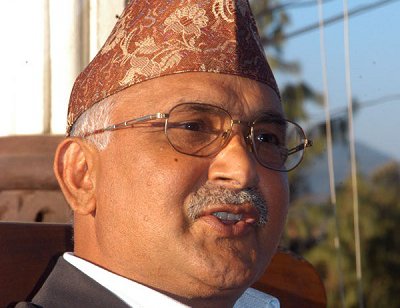 UCPN-Maoist Chairman Pushpa Kamal Dahal has announced that the possibility for negotiations is over. How do you respond to his statement?

I don’t want to interpret his statement. Given the present scenario, there is no alternative before us other than to write the new constitution. As we are partners of such an historic peace process, there is always room for negotiation and compromise.

UCPN-Maoist and its allies announced that there would not be any talk unless CA chair withdraws the proposal tabled by him?

Don’t talk about withdrawing the proposal. It just opens the door for the process of constitution writing and it is nothing more than that. UCPN-Maoist and its alliance will also accept this in the coming days.

Despite the rigid stand taken by UCPN-Maoist on fresh talks, how do you say that they will come for negotiations?

Don’t you think the move of the two ruling parties, Nepali Congress and CPN-UML, has completely shattered the hope for any consensus in the future?

We have waited for almost a year for consensus. Over the last one year, we agreed to extend the tenure of the committee chaired by UCPN-Maoist leader Dr. Baburam Bhattarai. However nothing materialized.  There is a limit to everything. We decided to form the committee on the basis of the process written in the constitution.

Even in the present bitterness, you are still hopeful about consensus. What is the reason behind this?

As a politician, I don’t want to remember the past. I always look to the future. The mission of all of us is to work for a better future for the country and there is the need of consensus to make our country prosper and develop. In this regard, I would like to invite UCPN-Maoist and its allies to the negotiations for a consensus constitution. CPN-UML will try hard to increase the number of political parties supporting the process of constitution making.

If there is no consensus in the disputed issues, what process will the two ruling parties follow?

There is a constitutional provision, which says that the process of two thirds majority will need to be initiated in case the parties fail to forge consensus. I would like to remind you that no constitution in the world has been promulgated through the CA with the backing of a full consensus. The definition of agreement does not entail that all you desire will be met in total.

What do you want to say to UCPN-Maoist and other parties in the alliance?

I want to urge other opposition parties to join the constitution making process because nothing has gone wrong as yet. It would be wrong to keep the CA a hostage of indecision in the name of consensus.

What do you say of the role played by CA Chair Subas Chandra Nembang?

CA Chair Subas Nembang had merely started the voting process as per the existing regulations. He has done nothing wrong and he has just fulfilled his responsibility.

At a time when a major faction of the previous accord has already declared that it will go against the process accepted in the CA, what is the meaning then of a new constitution?

The opposition parties are criticizing your party for trying to bring the constitution against the wishes of the people?

I am confident that the new constitution will now be promulgated in line with the aspirations and sentiments of the people. The CA will draft the constitution for the people. It will be for the Madhesis, Janajatis, Dalits and all the people of Nepal.

That means you are confident about the promulgation of a new constitution?