Finance Minister Dr. Ram Sharan Mahat, who is regarded as capable to even lead the government if push comes to shove, is now facing tough times to manage the money for quake reconstruction 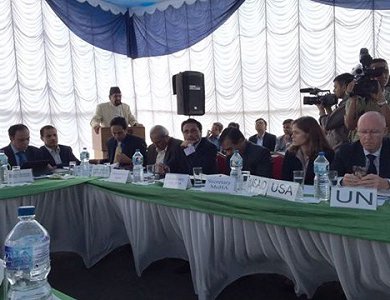 At a time when Nepal needs a huge amount of money for the reconstruction of the country, finance minister Dr. Ram Sharan Mahat has been having a very  tough time to convince Nepal’s development partners.

With a rainbow coalition government in place, Dr. Mahat’s work is more difficult as there is a clear lack of coordination among the government ministers, headed by partners.

Ministry of Foreign Affairs and Ministry of Home Affairs have their own ways in dealing with the foreign countries. Similarly, there is also a communication gap between his ministry and cabinet secretariat.

At a time when finance minister Dr. Mahat was calling international community to come with their generous support in the reconstruction and rebuilding of Nepal, chief secretary Leelamani Paudyal was critical towards the foreign support, arguing as he did for the need to rebuild the nation by its own resources.

The estimated cost of over 600 billion for reconstruction is very high and Nepal alone cannot meet it.  Without the generous support from international bilateral and multi-lateral donors, Nepal cannot go it alone.

As ministers representing various parties have their own interests, finance minister Dr. Mahat has to manage difficult things. Dr. Mahat is even defending prime minister Sushil Koirala when some party leaders are demanding a national government.

In the present crisis, finance minister Dr. Mahat is the only person, who is capable to persuade Nepal’s development partners to help the country bring its economy back on the right track and manage financial resources to rebuild the nation.

Melamchi Water To Reach Kathmandu On Saturday, Urged Locals To Cautions By Agencies 2 days, 17 hours ago