Although finance minister Dr. Ram Sharan Mahat has announced some reform measures, the recovery of the earthquake-hit economy appears to be a long way off. 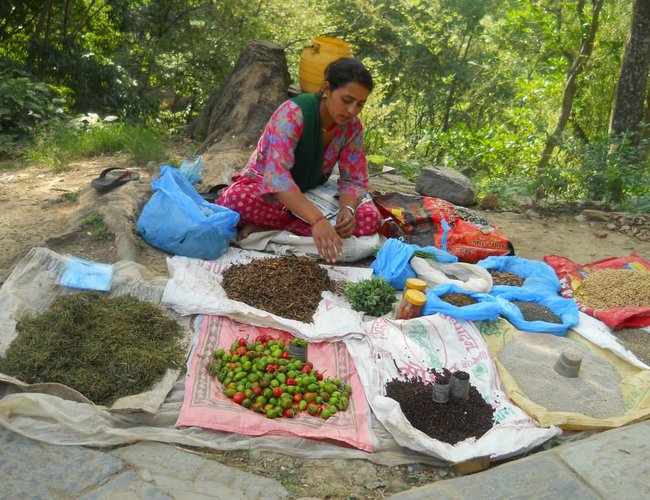 Badly devastated by the earthquakes of April and May,the late andabnormal monsoon, political uncertaintyand disputes in the labor arelikely to push the Nepalese economy into more difficulties. At a time when political chaos has created added troubles, Nepal is unlikely to see any progress in the economic sector in the days to come

As the monsoon entered late and is subnormal, Ministry of Agriculture Development has announced that the paddy plantation is yet to be completedin 50 percent areas by the third week of July.

Disputes between manpower agencies and Ministry of Laborhave continuedto haltthe movement of migrant workers. Failure of government to constitute National Reconstruction Authority has already delayed the process of carrying out the reconstruction work.

As the political tensions between various political forces is growing, political chaos and confrontations are likely. The present political scenario has already made investors wary of the future direction of Nepalese economy. This will continue to create a large gap between investment commitment and actual investment.

The budget speech of 2015 has showed that the performance of capital expenditure was not satisfactory. Just over one third of the total budget was spent. Despite several steps, the capital spending has remained low affecting the economic growth. As the political situation seems to have changed nothing, it will affect the actual capital spending like in the previous years.

After the earthquake, revenue mobilizationhas come down and it was unable to meetthe total revenue target set for FY2015. Value added tax remains a largest contributor to the revenue followed by income tax, customs duties, and excise duty (13.2%).

Inflation averaged remains in a good shape with 7 percent average down from 9.1% FY2014. As the prices of petroleum products and food and beverage remain lower, the inflation is likely to hover around 7.

Given the bleak political scenario, Finance Minister Dr. Ram SharanMahat presented the budget for FY2016 at Constituent Assembly on 14 July, 2015.  As expected by the people, the budget focus on rehabilitation and reconstruction and allocated more budget in that direction.

A total revenue target of NRs. 587.9 billion has been set for FY2016, including projected foreign grants of NRs110.9 billion and principal repayment of NRs 2.0 billion.

In an interaction with officials at the Ministry of Finance, FinanceMinister Dr. Mahat urged the officials to pay attention to the size of budget as it would be a challenging job for budget implementation due to a big size of the budget.

Had the authority been given full shape right now, then it would have been able to take a fast-track decision on most of the issues and handover shovel-ready projects to sector ministries for implementation.

As there is no sight for immediate appointment of Chief Executive, the reconstruction will be delayed, hitting the expected growth target of 6% and dampening the affected people’s hope of an early recovery of livelihood and restoration of basic infrastructure and public services.

When Finance Minister Dr.Mahat read his budget at the Legislature Parliament, he spoke with confidence about bringingtheeconomy back on track. Following the massive reaction against the budget from coalition partner CPN-UML, finance minister Dr. Mahat compromised giving up many reform measures which were prerequisitesto make progress. Political compromise cost the economic reform process.

After a marathon meeting with CPN-UML leaders, Dr. Mahat agreed to change the budget, allocating more funds as demanded by CPN-UML. The change will directly cost the economic reforms.

Given the current nature of political system where no political partyis likely to have a majority in the coming days and no finance minister dares to take major decisions, Nepal’s economic recovery will be sureto suffer hassles.

Overenthusiastic by the growth of average4 percent in the last decade, Nepalese planners endorsed the plan to upgrade Nepalfrom its current LDC status to the rank of developing countries by 2022. However, the earthquake has shattered the dream.

The scenario is now that Nepal may even lose much of the social and human progress achieved during the last fifteen years. Economic indicators too face a similar situation. Out of 75 districts, 31 were affected and 14 were declared as badly affected.

Nepal has announced the possibility of slowing down the GDP growth just a month after the earthquake.Central Bureau of Statistics lowered GDP growth by over 1.5 percentage points from an estimate of 4.6% in a no-earthquake scenario in 2015.

“Although the earthquake struck Nepal in the tenth month of FY2015, the impact on GDP growth seems to be sizable especially on the services sector, which is expected to grow by 3.9% compared to 6% in a no-earthquake scenario. Wholesale and retail trade; tourism activities (air transport, and hotel and restaurant businesses); real estate, renting and business activities; and education sub-sectors are the most affected,” writes Chandan Sapkota, an economist with The Asian Development in his blog.

“Agriculture sector is expected to grow by 1.9% and industry by 2.7%, down from earlier no-earthquake scenario forecast of 3% and 3.5%, respectively. The sharp drop in agricultural output is primarily due to the negative impact of delayed and weak monsoon in the first half of FY2015, and later the loss of livestock due to the earthquake,” writes Sapkota.

Nepal needs to take some drastic steps to achieveprogress. "Nepal can achieve the growth projected by finance minister Dr. Mahat next year. However, the government needs to strictly follow the reform measures,” said Professor Dr. BishwambherPyakuryal. “One of the effects of the earthquake will be increasing the number of people below the poverty line.”

“The income shock is largely felt through the loss of income-generating opportunities/livelihoods (including death and injuries to primary wage earners) and the loss of housing, productive assets (seeds, livestock, and farm equipment), and durable assets (assorted household items),” writes economist Sapkota.

The poor and vulnerable are particularly dependent on local infrastructure (roads, bridges, health posts, and schools) for access to labor and commodity markets, and for accumulation of human capital (especially those of children). Reviving local economic activities and resumption of basic public services along with an accelerated implementation of reconstruction projects will be critical to make up for the setback on poverty reduction caused by the earthquake.

Low oil prices and declining food prices continue to exert downward pressure on inflation in the region. The forecast for inflation in developing Asia is revised slightly down to 2.4% from 2.6% for 2015 but retained at 3.0% for 2016.

“There will not be any dearth of funds for the key projects as far as feasible from the administrative and technical points of view. However, the implementation should be paced up,” said Dr. Mahat.

Although the new budget lends hands to private sector, the latter is yet to come up witha concrete proposal. After the announcement of the budget, the reaction of the private sector was positive.

"The private sector and the development partners should extend support in the implementation of the budget as the government’s role is that of a facilitator to create the environment for increased economic activities and providing the required legal framework for the same,” said finance Minister Dr. Mahat.

“Despite certain lapses, the budget has made efforts to accommodate and address the issues raised by the private sector. Private sector supports the government for the implementation of budget,” said Narendra Kumar Basnyat, president of CNI.

Given the support to implement the budget, Nepal can post the economic progress as projected by the budget. However, the indicators are more hostile and unfavorable to meet the projected outcome next year.

NRB'S DECISION Surrounding Controversy By A Correspondent 4 days, 7 hours ago