As leaders of the constitution writing alliance, as well as the agitating Madheshis and Tharus, harden their stands, Nepal’s politics is clearly heading towards clashes and conflicts. 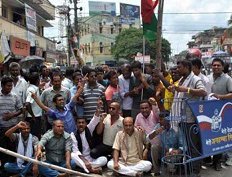 As leaders of the constitution writing alliance, as well as the agitating Madheshis and Tharus, harden their stands, Nepal’s politics is clearly heading towards clashes and conflicts. The recent spate of violence in Far West has already taken a toll on lives. Yet no concrete political move has emerged to contain it. As the top leaders of the four parties are taking the Constituent Assembly process a hostage, while dictating their will to be performed here, other leaders are challenging the legitimacy of the whole process. In a nutshell, Nepal’s constitutional process is witnessing a fresh crisis

“This constitution is a bundle of paper prepared by the leaders of four political parties in a dark room. We saw the bill only after it was presented to the committees of Constituent Assembly,” said Narayan Man Bijukchhe Rohit, president of Nepal Peasants and Workers Party. “The articles and clauses are added at their wishes and there is no consultation at all.”

Talking to New Spotlight, Bijukchhe said: “The four-party leaders consider themselves supreme. They passed the bill from the committee on the basis of  their strength.”

Not only Nepal Peasants and Workers Party, an old ally of the seven-party alliance, even Bijaya Kumar Gachchhadar, a member of the four party exclusive club, walked out from the meeting when the three party leaders decided to hand over the bill to CA chairperson Subhas Chandra Nembang on August 23 without accommodating his views.

“It is unfortunate that the leaders of the three parties did not listen to my suggestions. This will create more chaos in the country,” said leader of Madheshi Janadhikar Forum Gachchadar, boycotting the meeting to top leaders, on August 23.

Not only have these two leaders, even business communities, dalit leaders and women had bitter experiences with the top brass who completely sidelined their voices.

Complaining against the arrogant behavior of Sitaula, member of the drafting committee and UCPN Maoist leader Prabhu Sha tendered his resignation at the final round. "It is meaningless to be a member where I have no voice,” said Sha.

Sitaula tabled the Constitution Bill on 23 August, ignoring the call of Madhesh based parties and Tharus to consider their demands. Although prime minister Sushil Koirala issued a statement calling the disgruntled parties to come for negotiations, closing all the doors on the draft of the constitution cannot be a solution.

“I urged all agitating leaders to join the constitution writing process through the CA. This is a historic occasion to write the constitution,” said Prime Minister Koirala in his statement delivered almost at midnight, after the completion of the bill tabling process in the CA.

Prime Minister Koirala missed the last opportunity to invite the disgruntled leaders to the negotiations table. Had he issued the appeal earlier, even by showing the flexibility of postponing the tabling date for a few more days, the situation would have been different.

Instead of pacifying the agitating crowd, Prime Minister Koirala’s statement added fuel. From early morning of 25 August, violent demonstrations scattered all over the southern belt of Nepal. Violence erupted from a soft point in Kailali district, taking the life of eight innocent police officers and personnel.

Despite the deadly violence, the arrogance of political leaders continued. “We are committed to promulgate the new constitution next week whatever the situation,” said Prime Minister Koirala.

CPN-UML leader KP Sharma Oli went one step ahead in condemning the opposition. “No one can stop the constitution,” said Oli.

As the leaders of the three political parties issued their provocative statements, they added sparks to the violence throughout the country.

"We return to the negotiations if the leaders of the three parties agree to suspend all the process and progress made in CA. Otherwise, we will unmake the CA through the street violence,” said Mahanta Thakur, leader of TMLP.

As the constitution drafting process was dictated by leaders of three parties, the draft of the constitution was prepared without wider consultations. Although the CA received over 200,000 suggestions from the people, the committees did not entertain any of them.

Although the intensity of the demonstrations is low, the mass-scale violence after the first decision of the political parties on redrawing internal province boundaries on August 8 was ominous.

Since an 8 August, despite the agreement by political parties on redrawing the boundaries of the internal provinces, more violence erupted throughout the country. The second amendment on 20 August subsided the violence in mid-western and Karnali hills, but sparked a new round of violence in 22 Tarai districts.

The widespread political violence killed seven members of security forces, including a Senior Superintendent of Police Laxman Neupane and two inspectors. Three protestors were killed in Tikapur of far-western region on August 24.

During the first wide-spread demonstration, five protestors were killed in Surkhet and Jumla. Similarly, a protestor in Saptari and another in Rautahat were also killed.

“Modi is understood to have asked Koirala to reach out to dissenters. Five to ten people cannot sit in a room and write the constitution. All parties and forces should sit together. There must be a greater dialogue," reported the Hindustan Times.

According to an Indian Embassy press release, talking to prime minister Koirala on telephone, Indian Prime Minister Modi sent the message that the political leadership of Nepal should resolve all outstanding issues through dialogue between all political parties and through the process of widest possible consultations, including with the public,  so as to strengthen the climate of trust and confidence across and between all sections of society, and arrive at solutions that reflect the will and accommodate the aspirations of all citizens of a richly diverse society within a united, peaceful, stable and prosperous Nepal.

As confrontations escalated , violence spread over different parts of Nepal on Tuesday 25 August. One person was killed in police firing in Rautahat district.

“We are concerned by reports from Nepal of continuing political violence. Seven members of the security forces and three protestors were reportedly killed yesterday. A two year-old son of one deceased police officer was also killed. This is in addition to the deaths of five protestors during widespread demonstrations since an 8 August agreement by political parties on redrawing internal state boundaries,” said Rupert Colville, High Commissioner for Human Rights in a press statement issued from Geneva.

Despite international concern, leaders of the four parties have not shown any flexibility to the negotiations. Similarly, the opposition parties are also trying to make the situation more violent by putting the country’s southern areas into stand still situation.

As more agitators are coming to the streets, the security situation is further worsening. Nepal Police and Nepal Armed Police are already in saturation with growing level of violence. After the violent incident in Kailali, Ministry of Home Affairs even issued orders to concerned chief district officers to deploy Nepal Army in order to restore the law and order.

From East of Morang District to Kalai of west, the life and situation are out of gear. More the government is getting arrogant, the more the violent demonstrations.

As violence is gradually heading out of control, the government is issuing a prohibitory order in the day time and imposing curfew at night in more than a dozens of district headquarters.

Additional police personnel are transferred from the relatively peaceful areas of hills to more violent areas of terai. Although the security forces are carefully mobilized in various parts of Nepal to maintain the law and order, nothing can change without a prudent political intervention or negotiation.

Leaders of four political parties want agitating parties to come to CA for negotiations. Knowing that nothing can change through the regular process of CA and with their bitter experience of three party leaders as buying time, agitating Madhesh Based and Tharuhat leaders have said that the indefinite postponement of CA meeting and withdrawal of bill is the pre-condition for the negotiations.

According to Constituent Assembly Rules and Procedures 2013, there is a lengthy process for the change in any article and clause in the draft of the constitution. As the final bill is already in the CA procedure, the opposition can make their voices heard if they can make the ruling party leaders kneel down.

From the beginning of the drafting process up to its finalization, the ruling party leaders have done a little work to set a process of broader consultation rolling. On the night of January 25, UCPN-Maoist led alliance of thirty parties, including Madheshis, smashed the chair at CA and vandalized the House against the Nepali Congress and CPN-UML move to table the bill.

Hardening the political stand after the agitating Madheshi and ethnic Tharu leaders, while preparing to pass the new constitution, the leaders of four parties have not budged an inch despite the latest round of violence.

As the four-party alliance led by Prime Minister Sushil Koirala outrightly rejected talks on amendment of the Constitutional Bill and Terai based Madhesh Tharuhat Party’s demands to suspend the Constituent Assembly process as precondition for negotiations, Nepal’s political process is heading towards a more violent path.

In case of a continuing deadlock, the four ruling parties can by force put the bill of constitution in CA procedure and can pass the bill through their voting strength. However, that is not easy.

At a time of violent moves and countermoves, it is unlikely that the CA members can vote on the bill ignoring the state of anarchy and oppression by the state. As political parties cannot issue the whip in CA, a shortfall in the two thirds majority is likely because of the stads by the Madheshi and Janjati leaders against the bill. All this might culminate into an end of the era of three parties and the legitimacy of Constituent Assembly.

If violence in Tharu areas and Madhesh intensifies, it is unlikely that the president can promulgate the constitution as forced by the four parties. A constitutional crisis will be likely.