Himalaya Airlines’ will fly to Colombo From October 1

Himalaya Airlines’ will fly to Colombo From October 1 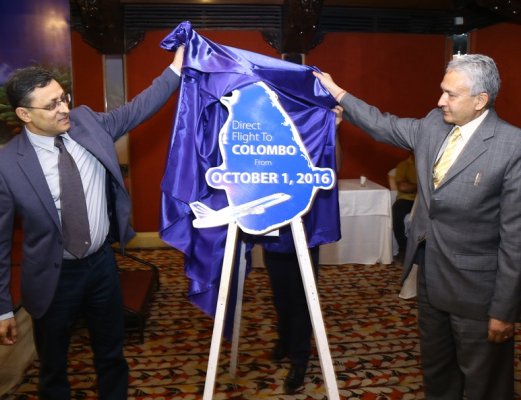 Himalaya Airlines, a Nepal-China Joint Venture Airline, announces second destination: Colombo, capital of Sri Lanka as the airline will commence its passenger services on the Kathmandu/Colombo/Kathmandu route with effect from October 1, 2016.

The airline will fly its A320-214 (configured with 8 Business Class and 150 Economy class seats) on the new route.

Himalaya Airlines Vice President - Administration, Vijay Shrestha said, “After an overwhelming response received from the previous 2 non-scheduled flights to Colombo, we found this route to be very potential. We have observed passenger traffic data between the two countries over the last several years before arriving at this route decision. We are very pleased to be able to resume services to and from Colombo as it is an important market for tourism promotion of both countries. Flying to this destination will definitely promote tourism between two nations along with generating new business opportunities.”

The airline has appointed Classic Travel as its General Sales Agents (GSA), who will be responsible for the airline’s sales and marketing, market development, reservations and ticketing services representing the airline.

The airfare offered by the airlines starts from NPR 29,191 for one way and NPR 50,041 for round trip, inclusive of governmental taxes.

Himalaya Airlines, a full-service carrier, established in August 2014, has started its scheduled flights operation from May 31, 2016 flying directly to Doha, Qatar. Further to the opening of the Kathmandu/Colombo/Kathmandu route, the Airline has planned regular flights to destinations: Delhi, Yangon, Dammam, Beijing, Lhasa, Chengdu, Bangkok, Hong Kong and Dubai.

According to a press release issued by Brand and Service Improvement Department of Himalaya Airlines Pvt. Ltd, over the coming five years, the airline aims at acquiring 15 Airbus 320 family aircraft and will operate from Kathmandu to various cities in Asia and beyond. The company will introduce long haul wide body aircraft of A330 family in due course of time for the operation of direct flights to Japan, Korea, Europe, Australia, and America.

Tibet Airlines holds 48.99%of equity capital of the company, whereas the Nepalese side holds 51.01%

Tourists Have Not Cancelled Their Hotel Bookings In Nepal: HAN’s Chair Rana By NEW SPOTLIGHT ONLINE 1 week, 6 days ago

Nepal Has No Threat To Coronavirus: Tourism Minister Bhattarai By NEW SPOTLIGHT ONLINE 2 weeks, 1 day ago

Dr. Dhananjaya Regmi, To Head NTB As A CEO By NEW SPOTLIGHT ONLINE 2 weeks, 6 days ago

A Complete Trip, Personally By Abhishekh Adhikari 3 weeks, 2 days ago