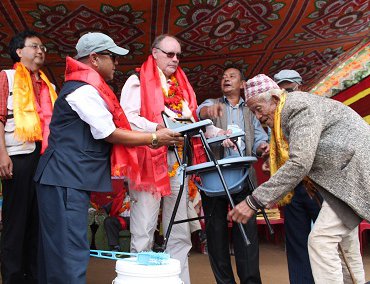 The support provided by the Government of Finland to UNICEF over the past five years has yielded many results in increasing access to water and sanitation in Nepal.  It is now being continued with a focus on four earthquake-affected districts – Dolakha, Kavrepalanchowk, Nuwakot and Gorkha.

The € 9.8 million Finnish-UNICEF partnership started in 2011 and has helped the country to achieve remarkable result. Twenty districts benefitting from this partnership have achieved Open Defecation Free (ODF) status, which represents more than half of the total number of districts (38) that achieved ODF status nationwide.  Working together with Government as well as international, national and civil society organizations, the partnership has also been a crucial peg in the dramatic increase of national sanitation coverage from 43 percent to 87 per cent between 2010 and 2016.

The partnership, formally known as “Aligning for Action – Sanitation and Water for All in the context of Climate Change in Nepal,” also contributed towards enhancing access to child-, gender- and disabled-friendly water, sanitation and hygiene (WASH) facilities in schools. This resulted in 82 per cent access rate to toilets as well as 78 per cent water supply coverage in the schools in the concerned districts.

“The Government of Finland is committed to supporting Nepal’s goal of attaining water and sanitation for all,” said Jorma Suvanto, the Ambassador of Finland to Nepal. “Our partnership with UNICEF has helped us fulfill that commitment as well as enabled us to provide access to sustainable water, sanitation and hygiene to the most vulnerable population – children and women in Nepal.”

The Finnish-UNICEF partnership has also enabled policy reforms, sector harmonization and capacity building support to the Government of Nepal for disaster resilience and system strengthening of WASH services.

“With Finland's support, UNICEF has been able to conduct both policy- and system-related work at the national level as well as works to accelerate the expansion of WASH services at the community level,” said Tomoo Hozumi, UNICEF Representative to Nepal. “It has also enabled us to save the lives of children and women in Nepal not only during regular times but also during disasters, like the earthquake last year.”

Following the earthquakes in 2015, the Government of Finland immediately provided an additional € 500,000 to UNICEF to kick start life-saving response in the 14 most earthquake-affected districts. In 2016, the partnership has further extended support for Nepal by signing a €1 million agreement to co-finance recovery and reconstruction of WASH facilities in communities and schools affected by the devastating earthquakes that struck Nepal in April and May 2015.

The support assisted in the reconstruction of 60 partially damaged water supply schemes and has provisions for improving/providing WASH facilities in 100 schools in four affected districts --  Dolakha Gorkha, Kavrepalanchowk, and Nuwakot.