A staggering 65.6 million people worldwide, more than double the population of Nepal, were forcibly displaced from their homes owing to conflict or persecution by the end of 2016, UNHCR said in a report just before the World Refugee Day on 20 June. 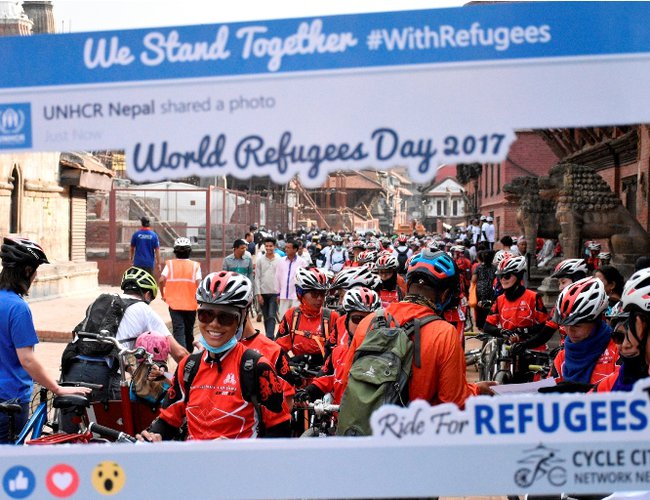 A staggering 65.6 million people worldwide, more than double the population of Nepal, were forcibly displaced from their homes owing to conflict or persecution by the end of 2016, UNHCR said in a report just before the World Refugee Day on 20 June. The number included 22.5 million refugees, 40.3 million internally displaced people and 2.8 million asylum seekers. What was more shocking was that the number was 300,000 higher than it was in the previous year.

The figure mentioned in the UNHCR report is the highest recorded by the agency since it’s formation after the Second World War. The report also pointed that out that Syria's six-year conflict alone had sent more than 5.5 million people seeking safety in other countries. This, along with the 6.3 million Syrians displaced inside the country, meant that that nearly two thirds of all Syrians have been forced to flee from their homes.

But the problem is not just with the staggering figures. While the number of refugees has been rising in recent years, the countries accepting them are slowly tightening their refugee policy.

Germany, which had opened its doors for refugees as soon as the problem erupted and had given refugee status to  250,000 people in 2016, announced earlier this year it would start sending many of the refugees back to Greece, from where they normally enter Germany. In Italy, another country which initially accepted many migrants, calls for detention and deportation of migrants has been growing louder every day. Italy's chief of police event went to the extent of blaming refugees for "instability and threats". The UK government recently announced it had halted a program to resettle lone refugee children through which campaigners had hoped that 3,000 children would have benefitted. In the US, the chaos caused by President Trump’s decision to ban entry of refugees to the country is well known.

The problem has further been compounded by the alleged ‘rising crimes’ and growing right wing populism in many European countries. According to Germany interior ministry, the crime rate among migrants rose by more than 50 per cent last year. There has also been growing clamor within countries like Sweden which claim that the influx of refugees has led to an increase in crimes. More worringly, with the increase in terrorist attacks in European cities, many worry that welcoming refugees would open door to more extremist attacks.

The solution is not easy. With the number of refugees increasing every year and the countries accepting them taking a hard line stance, the problem is only expected to compound in the coming years.

US: Troops In Afghanistan To Withdraw By September 11 By Agencies 9 hours, 35 minutes ago

Iran Nuclear Deal Talks To Resume Next Week By Agencies 4 days, 9 hours ago