The use of technology has been rooted deep into the lives of millions of people. 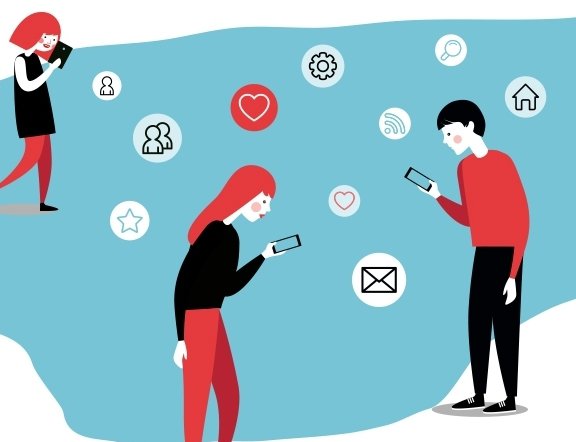 Phubbing is the act of ignoring someone in a social environment by looking at your cell phone instead of paying attention. I think the image is not strange for anyone; two or more people sitting at the same table in a restaurant, each with a mobile phone in hand ... texting, updating their status on Facebook, uploading the photo of the food on Instagram, summarizing their experience in 280 characters or less on Twitter etc., while "spending time with each other".

The use of technology has been rooted deep into the lives of millions of people. We find people who can leave homes every day with no key, no watch or no cash, but seldom do you find them leaving homes without their cell phone.

This is repeated in many other settings, and I may have fallen prey to this social stigma. A beep of a "new text message" makes us hide our phones or stop participating in the conversation. We are forced to read the message or answer the call. But once we “return" to the conversation, we are left behind and thus, have to make an effort to recover the thread, which is fairly impossible as now, it is a lost path.

In simple and comprehensible words, phubbing is to ignore a person or your environment by interacting with your cell phone. For some, phubbing would be defined with an addiction to smartphones that takes all your time. Constantly checking your phone to verify updates, notifications, chat, post your location and checking tweets instead of talking to someone in front of you; an action that for the external eye is a lack of respect and total discourtesy, but for those of us under the influence of this modern symptom we can claim that it is normal and you are listening to the other person, and not ignoring- you are multitasking!

These scenes are becoming more common. In homes, restaurants, offices and even in temples- in short, everywhere. At present, we see this phenomenon in all places- in restaurant, cafeteria, school, in the cinema, at bus stop etc. Sad but strange, people suffering from this modern symptom of excessive use of technology have stopped living in the moment. These people are part of the crowd, but alone.

The society of the new technologies is treading the thin line that separates the addiction and lack of courtesy, loneliness and respect. Phubbing is not just anti-social but bad for the environment too. Obviously, the Internet, with all its tools, is extremely useful. Who can work a day without Internet? However, it is visible that we are losing control. Everything needs balance and moderation. We must master technology and not allow technology to master us.

It seems that smartphones can be blamed for more than bad manners; they also create a significant carbon footprint, as they consume far more energy than most people realize. Research by Mark Mills, the chief executive of the Digital Power Group, suggests that people who use a wireless connection to access 2.8GB of data each week are using more energy each year than a medium-sized fridge, once charging, data usage and so on are all taken into account.

The problem is that most of this energy usage is hidden so people don't really think about it. Mobile is a great invention, but you have to make good use of it.  Excessive use of the cell phone disconnects people from reality.

It is true that we currently live in the perfect technological age. We have the world a click away and we can have contact with people 24/7, and although everything seems to be honey on flakes, it could turn out that technology is also destroying our relationships. Will the new generation be able to free themselves from the technological slavery that grows around us? Or even more urgent, will we be able to stop this growing technological danger to avoid subjecting ourselves to an increasingly "demanding" technology?

Do we need to go deeper into this issue on the way we conceive and relate to technology? Their relationship with our identity as people and our need for communication, sharing and communion?

When you wake up in the morning, do you first look at your partner or your mobile phone?

The fear of missing something is now so extensive that it has long been given its own abbreviation: FOMO (Fear Of Missing Out). FOMO is more about a forced-based fear of not being there where the others are, and not the least digital. When you suffer from FOMO you have the urge to constantly be on social media to show yourself as well as to keep track of the lives of others. It is especially for people who have not received enough recognition and love that have a tendency to FOMO. They seek attention in the form of 'likes' and 'comments'.

Many people have anxiety attacks if they walk away for a few minutes from their smartphone, others may forget many vital information on their mobile phone at home. This close relationship of the human being with an electronic device is triggering a feeling of coldness and lack of communication between people.

The problem with phubbing is that many have given preference to virtual interactions, and as a result, some people feel alone, even in the midst of the crowd. And virtual relationships do not create true bonds of friendship. True connection can only be felt by the tone of a voice, the look and in most cases, the feel. People are known only for their posts, which, in fact, are mere fragments of what they really think or feel.

By no means, like everything else in life, can we use phone in moderation? After all, everything that is bad has positive vibes too. Therefore, value people more from their social networking presence, since virtual relationships are not always as real as they appear.

Depression, dependence and nomophobia are some of the psychological diseases that are currently proliferating in the face of continued use of technology. Recognizing them is a part of the recovery treatment. Only through communication can human life hold meaning. Good communication is the bridge between confusion and clarity and it is high time people understood this.

BOOK On Indian Philosophy By A Correspondent 1 month, 1 week ago

Book On Nepal, India And China By A Correspondent 5 months, 1 week ago