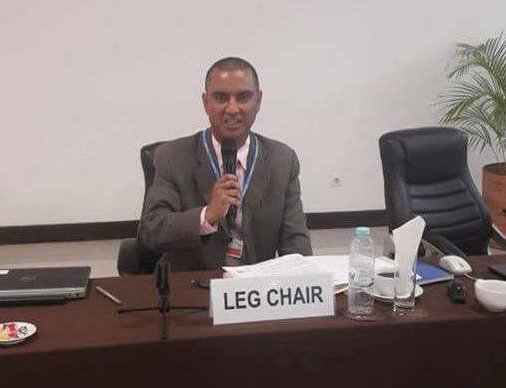 Nepal became the chair of the LDC Expert Group (LEG) at its 33rd meeting held at Sao Tome and Principe, Africa, from 5 to 9 February 2018. The meeting assessed the progress made in the process to formulate and implement National Adaptation Plan (NAP). Naresh Sharma, Chief of Climate Finance Management Section, and NAP Coordinator, MoPE, and LEG member representing Asian LDCs for 5 years (2016-2020), was unanimously elected chair for two years (2018-2019). He also served at the Chair of the Adaptation Fund Board in 2016. I also offered my service for the LDCs on climate change adaptation (CCA) as the LEG Chair for two years (2014 and 2015) and Vice-Chair for 2013.

LEG was established by the Parties to the UNFCCC at its 7th session in 2001 to provide technical support and advice to the LDCs on NAPA and the LDC work programme, and to provide technical guidance and support to the NAP process. The LEG is also mandated to advise on capacity building needs and mainstreaming NAPAs into regular development planning, and facilitate the exchange of information. Article 4.9 of the Convention obliges the Parties to the UNFCCC to support the LDCs on finance and technology.

LEG is a 13-member UNFCCC constituted body, with 5 experts from African LDCs, 2 each from Asian and Small Island Developing States, which are LDC Parties, 3 from developed country Parties, and 1 expert nominated by the Chair of the LDC Coordination Group. The nominated experts should have expertise in vulnerability, adaptation assessment and should serve in their personal capacity. The Chair should attend and report the meetings of the Subsidiary Bodies and the Conference of the Parties on its work, i.e., support provided to the LDCs, and propose programme of work for the remainder of its term. LEG meets twice a year and contributes to enhance capacity of the LDCs, particularly on CCA. The fund implementing agencies such as those accessing the LDC Fund and Green Climate Fund also report to each LEG meeting on the support received and provided to the LDCs, including challenges and opportunities in accessing fund and implementing adaptation actions.

While being engaged in LEG between 2008 and early 2018, Nepal accessed bilateral and multilateral resources from LDC Fund to prepare and implement NAPA and its prioritised programmes, PPCR, building capacity on adaptation and Scaling up Renewable Energy in Low Income Countries Programme (SREP). The SPRP resource was also used for Envi Power Nepal to convert waste to energy. Nepal also accessed funding from DFID and EU for NCCSP implementation in 14 climate vulnerable districts of far and mid-West Nepal. Nepal received GCF resources during CoP22 in 2016, as the first country to advance the NAP formulation process.

Nepal organised LEG meeting in Kathmandu in November 2010 immediately after the approval of NAPA, including international workshop on standardised baseline (to CDM) in 2011 and international conference of mountainous countries on climate change in 2012.

Nepal's engagement in LEG provided a platform to further understand the nature of support available and sources and ways to access them. Being at LEG, Nepal knew the reasons for substantial delays and 'tactics' in approval of Nepal's NAPA proposal in January 2008 (after one year of submission). This period was also instrumental in formulating and implementing Nepal's climate change policy, LAPA Framework, Climate Change Budget Code and programme/project screening guide from climate change perspectives.

Prakash Mathema, now Secretary at MoPE, chaired a LDC Coordination Group professionally in 2013 and 2014 except during CoP20 in Lima, Peru. The last day of Nepal's chairmanship to this Group in Lima became the 'turning point' for Nepal to lead the Adaptation Fund Board. In fact, a 'short consultation' with Dr. K.C. Paudel, the then Secretary at MoPE, who facilitated the meeting of this Group during CoP20 contributed to 'position' Nepal in the Adaptation Fund Board (AFB) from LDCs. This representation provided the opportunity for Nepal to chair the Board in 2016. LEG members, in February 2018, trusted Sharma to lead the LEG and benefit from his experience of AFB chairmanship as well. The early 2016 dream turned to reality.

Nepal's adaptation actions are acknowledged in different fora. More than 80 percent fund channelling is to field level activities, LAPA and budget code. NCCSP's effort in integrating CCA into local to national planning processes, honourable mentions of its activities in the AFB exhibition, and sharing of experiences and learning on Nepal's multi-stakeholders engaged, multi-ministries coordinated working group, transparent and inclusive NAP formulation process, including in the NAP Expo are some of the examples that

Nepal has showcased CCA to the adaptation community. Although, Nepal was acclaimed in Marrakech for harnessing GCF resources for the NAP process, this fund is yet to reach Kathmandu. Hence, NAP formulation process has been 'paused' for several months thereby challenging the opportunities for the integration of CCA into policies and strategies and to reduce climate change vulnerability.

Nepal should encourage and continue to support its delegates to tap positions/opportunities to develop individual and/or the country's capacity and extensively use their experiences, skills and learning at national and local levels in harnessing and mobilizing resources. This also motivates climate vulnerable communities to learn more, build/enhance capacity, and oblige to work for the climate.

PRASHASTI ARYAL Rising Poet By A Correspondent 1 week, 4 days ago

COVID-19: Protecting Workers In The Workplace By Patrick Belser 1 month, 4 weeks ago