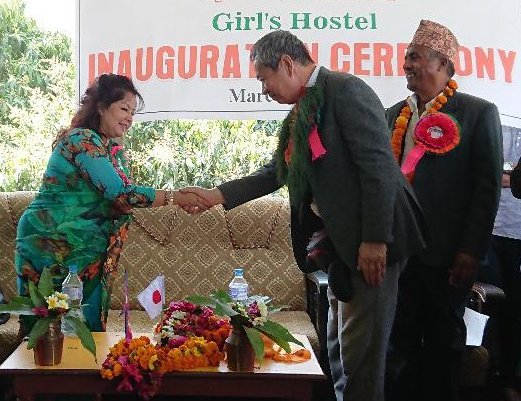 The Government of Japan extended financial assistance of US Dollars 81,948 (NPR approximately 8.7 million) to RUWDUC under the Grant Assistance for Grassroots Human Security Projects (GGP).

RUWDUC, a Nepali NGO in Dadeldhura District, worked with Triveni Multiple Campus to construct a two-storey hostel, consisting of eight rooms, toilets, and a kitchen. On the request of the project committee of Triveni Campus, Parshuram Municipality financially assisted for the construction of the second floor.

Triveni Multiple Campus is a community-based campus that is located about 85 km south-west of the Dadeldhura Headquarter. Established in 2007, it is the sole public campus in the area where 221 students pursue higher education.

In the Far Western Region, cultural and economic obstacles to female higher education are prominent. In addition, female students face various difficulties to attend classes regularly due to the long hours it takes to commute to the campus, and the insecurity along the way. Through this project, it is expected that the number of female students will increase and the drop-out rate among them will decrease.

Japan To Celebrate May 26 As “Hirotaka Takeuchi 14 of 8000m Mountains Summit Day By NEW SPOTLIGHT ONLINE 10 hours, 54 minutes ago