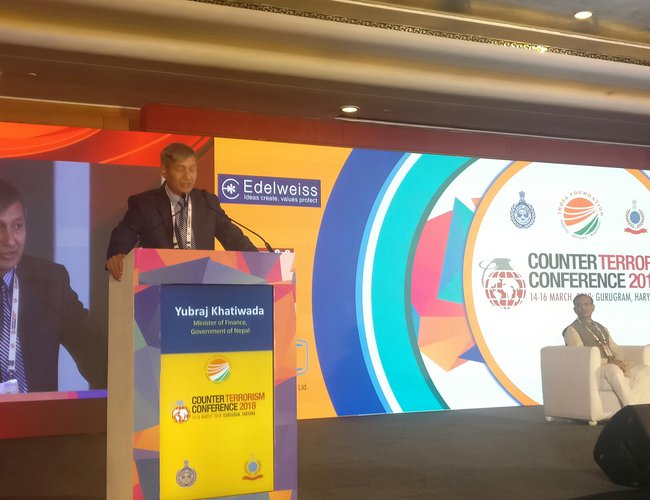 Finance Minister Dr. Yuba Raj Khatiwada stated that terrorism is a menace not confined to a particular society, country or a region: it is a global problem, permeating all sorts of boundaries and affecting every society in one way or other.

Addressing the inaugural session of the 4th edition of the Counter Terrorism Conference being held in Gurgaon, India, Finance Minister Dr. Khatiwada said that terrorism does not only cause destruction of lives and properties, he said, it seeks to uproot the very foundation of our civilizations and values. He further added that terrorism disrupts society’s progress, country’s development and humanity's ingenuity and sense of fraternity. Terrorism has resulted in the unnecessary burden of billions of dollars of resources to governments as fight against terrorism has been a costly venture, he said, this precious resource could otherwise have gone for developmental works.

Speaking on the changing contours of terrorism, the Minister pointed out that with technological advancement, our capacity to tackle security threats has of course increased, but so has our vulnerability. In an age of cyberspace and internet exposure, he added, terrorists do have new ways and target points to victimize us and disrupt our lives.

Minister underscored the need of stringent legislative framework to deter and disrupt all types of terrorist activities and added that such legislative measures should be complemented by proper counter-terrorism strategies and appropriate tools to detect incidence of radicalization, exploitation of internet and social media platforms by terrorist organizations.

Dr Khatiwada highlighted Nepal's policy of never allowing its land to be exploited by any groups trying to carry out terrorist activities anywhere in our region or beyond. He stressed that terrorism should never be used as a means to serve any interest.

As a member of the United Nations, SAARC and BIMSTEC, the Minister said, Nepal has joined and implemented international and regional treaties on counter-terrorism. Within SAARC, he added, Nepal has a notable track record in supporting collective undertaking against terrorism as the region's first framework treaty in this regard, namely SAARC Convention on Suppression of Terrorism, was the outcome of the third Summit which Kathmandu hosted. The Minister also mentioned of BIMSTEC as another important regional platform to act together on terrorism.

Speaking on Nepal's national capacity and preparedness against terrorism, the Finance Minister mentioned that the country has enhanced security infrastructure and trained security personnel so as to remain prepared to meet the emerging security demands, including prevention of any form of terrorist attack. Security wings are updated on the new forms of technology and we have made efforts to provide them with required international exposure, he said. In compliance with our international obligations on terrorist financing, Hon Minister added, we have establishedfinancial intelligence unitand anti money laundering agency under Money Laundering Prevention Act as central entitiesto detect, process, and analyze financial information and intelligence on suspected money laundering and terrorist financing activities.

Defining terrorism as humanity's common threat, Minister pointed out that terrorists can be nobody’s friends and as long as terrorism survives, fulfilling theinternational development goals will remain distant dreams. Our future, he said, will, therefore, depend on how resolutely we devise our collective mission to uproot terrorism from the world and how concertedly we calibrate our actions and intent.

According to a press release issued by Embassy of Nepal, New Delhi, It may be noted that Counter Terrorism Conference is an annual event convened by Indian Foundation, a Delhi-based independent think tank, in association with the Ministry of Home Affairs of India and the state government of Haryana. Participating in the Conference are ministers, government officials, security and intelligence experts, analysts, media persons and other stakeholders from India and abroad.

PHDCCI Pitches For India To Be A Hub Of Sustainable Mobility By NEW SPOTLIGHT ONLINE 12 hours, 34 minutes ago