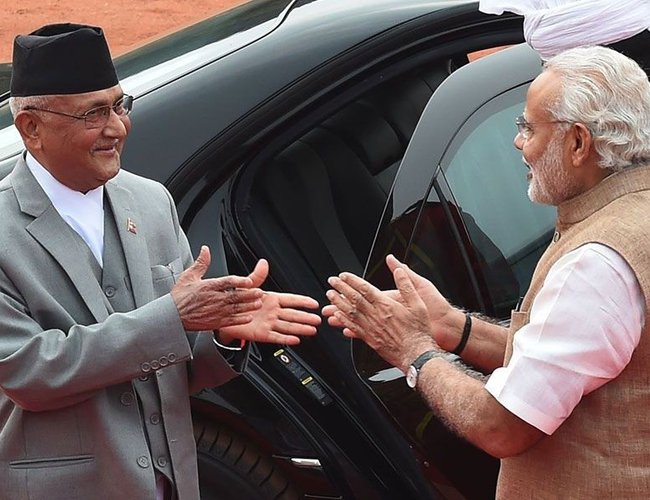 Prime Minister KP Sharma Oli is scheduled to brief both upper and lower houses of the federal parliament on Tuesday on the agenda of his state visit to India slated for April 6-8.

According to sources at the Prime Minister's Office (PMO), Oli will inform parliament about the agendas of his visit and the scheduled bilateral meetings with his Indian counterpart and top officials.

Spokesperson for the parliament secretariat, Bharat Gautam said that Oli has sought time for addressing the lower and upper houses separately on Tuesday.

According to My Republica, the minister has already made it clear that no new agreements will be inked during his visit which will give priority to expediting implementation of the projects signed between the two neighbors in the past.

Oli, who is embarking on India visit at the invitation of Indian Prime Minister Narendra Modi, is scheduled to hold a meeting with the Indian president, vice president, prime minister and other senior ministers.

The current session of parliament is likely to be prorogued on Tuesday following the address of Prime Minister Oli.

Minister for Law, Justice and Parliamentary Affairs, Sher Bahadur Tamang said that a cabinet meeting on Tuesday morning is likely to recommend to the president to prorogue the House session.

"We will consider the pending tasks of parliament during the cabinet meeting and decide whether to prorogue the House session," said Tamang.

The government is under pressure as the deadline for endorsing some replacement bills is just a month away.

According to the minister, replacement bills on National Assembly Election Bill, Bills on Truth and Reconciliation Commission and Commission of Investigation on Enforced Disappeared Persons and Health Education Bill should be endorsed by the first week of May.

"If the House session is prorogued on Tuesday, the budget session of parliament will commence in early May," he said.

The current parliament session which started 30 days ago gave the vote of confidence to Prime Minister Oli, witnessed the president's address to a joint session of the lower and upper houses and endorsed the interim working procedure.

Japan To Celebrate May 26 As “Hirotaka Takeuchi 14 of 8000m Mountains Summit Day By NEW SPOTLIGHT ONLINE 10 hours, 57 minutes ago