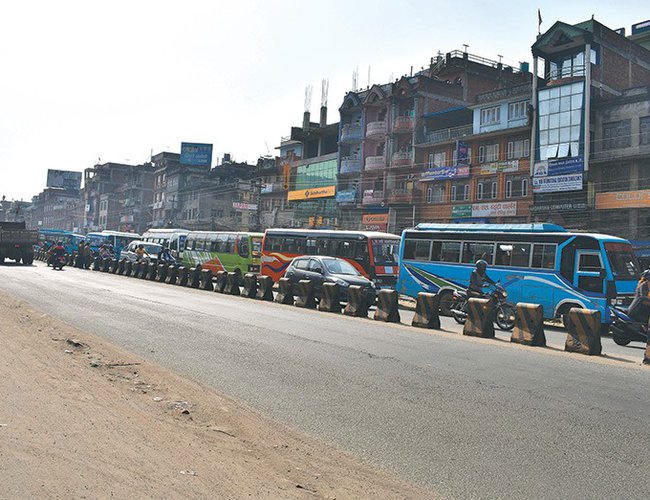 Transport cartels operating along the Arniko Highway continued their protest on Monday, demanding the scrapping of the route permit given to the newly introduced Mayur Yatayat Transportation, which has challenged the cartels' monopoly on the highway.

On Monday, Kavre Bus Committee and Kavre Minibus Committee, which represent the cartels of bus operators on the highway, parked their vehicles in the middle of the road at Tribhuwan Chowk, Pul Bazaar, Janagal among many places along the highway to prevent the operation of buses run by Mayur Yatayat.

According to My Republica, when a bus of Mayur Yatayat was stopped by the cartel at Janagal, the locals supported Mayur Yatayat and safely escorted the bus. This clearly proves that locals along the highway are in favor of breaking the transport cartels, which mostly run old vehicles and carry as many passengers as possible.

The transport committees representing the cartels warned of completely halting operating their vehicles. However, they operated a few vehicles on Monday after the Department of Transport Management (DoTM) threatened to scrap their route permits for refusing to ply their vehicles on the road.

Due to the halting of bus service by the cartels, passengers on Monday had to change up to three vehicles to reach the destinations from Dhulikhel, the headquarters of Kavre district.

Passengers from Khopani, Manedovan, Shankhu, Kamidada, Dukharka, Chamrangbenshi, Bansdole, Raviopi Deurali, Shera Nala and Ghimire Gaun and other rural destinations were forced to go through lots of ordeal to reach the district headquarters as 14 transportation committees that form the cartel along the highway drastically reduced the number of vehicles plying the highway.

“The committees claim to have operated vehicles. But everyone knows what type of vehicles and how many vehicles were operated,” said Indra Prasad Dahal, an irate passenger from Nala. “We were forced to change two buses to reach Dhulikhel. Especially women and the elderly faced lots of difficulties.”

The cartels along the highway have long been preventing entry of new competitors, safeguarding their over four decades of monopoly within their strong syndicate system. When the DoTM issued the route permits for 24 buses of the Mayur Yatayat on March 15, it caused a huge uproar among the transport syndicates operating in that route. Since then, they have been demanding that the government revoke the newcomer's permit. The protesting transport entrepreneurs even resorted to attacking vehicles of Mayur Yatayat.

Superintendent of Police (SP), Sahakul Thapa, chief of District Police Office, Kavre, said they are creating an environment for Mayur Yatayat to operate safely. “We have been deploying at least one police team in sensitive areas including Tribhuvan and Chardobato so that protestors would refrain from attacking Mayur Yatayat buses,” he said.