The students from schools across Nepal were congratulated at the Outstanding Cambridge Learner Awards ceremony, supported by the British Council, on 6 April 2018 at the Himalayan Hotel, Patan, Nepal. 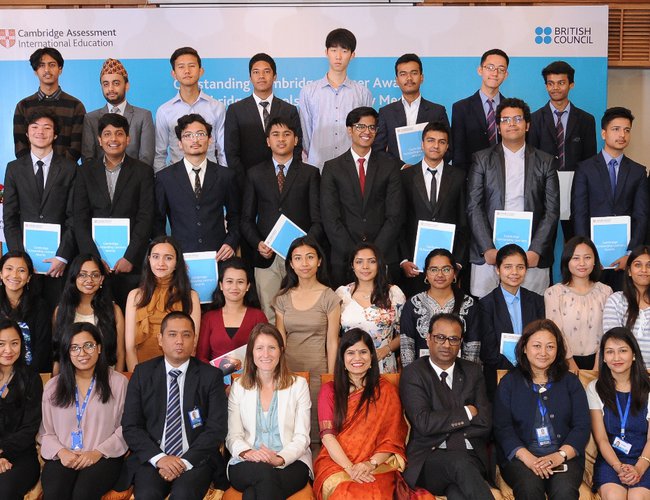 Thirty-eight students in Nepal have won Outstanding Cambridge Learner Awards for their exceptional performance in the June 2017 and November 2017 Cambridge exam series.

Ruchira Ghosh, Regional Director, South Asia, Cambridge International, said “We are thrilled to see students across Nepal exhibit their desire for learning and accomplish their goals. These remarkable results in Cambridge examinations would not have been achieved without the efforts and devotion of teachers and constant support from the families of these students. Congratulations to all the students and we wish them all the luck for their future endeavors.”

Jim O'Neill, Country Exams Manager at British Council Nepal, said “The successes we have celebrated this year are a great credit to the students and their families, to their school teachers and academic management staff. There is room in a healthy education sector for a variety of providers and for study option in both local and foreign curriculum. The Awards announced today are testimony to the quality of the Cambridge International A Level Programme and its value to Nepal education sector. As British Council moves towards its 60th year in Nepal, opening access to UK qualifications remains a genuine highlight of our work.”

Cambridge International, with the support of British Council Nepal, is also working to create a new support network for Cambridge schools in Nepal. The inaugural Cambridge School Community meet took place on 6 April, after the awards ceremony. It provided a reflective space where representatives from schools and Cambridge International could collaborate and share ideas.

The Nepal students who were awarded by Cambridge International are:

Top in the World

Japan To Celebrate May 26 As “Hirotaka Takeuchi 14 of 8000m Mountains Summit Day By NEW SPOTLIGHT ONLINE 13 hours, 3 minutes ago