Unlike the high growth of previous years, ADB projects that Nepal’s GDP growth will be 4.9 percent in the ongoing fiscal year 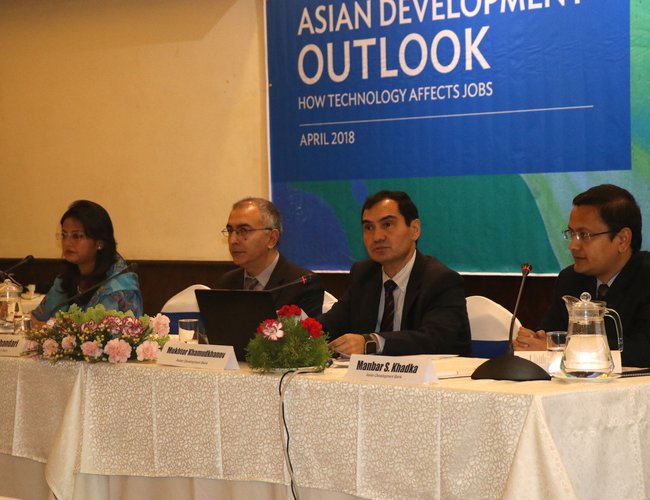 With modest progress in agriculture, industrial output and tourism sector, Nepal’s economy is projected to grow by 4.9 per cent in the current fiscal from 6.9 per cent of the previous fiscal year.

Releasing Asian Development Outlook, ADB predicts that Nepal’s growth is expected to improve to 5.5 per cent in coming fiscal 2018-19.

ADB hopes that the completion of highest capacity 456-megawatt Upper Tamakosi Hydropower Project, which is scheduled to be completed by the middle of next fiscal, will have significant contribution.

Following the flood, the ADB had projected 4.7 per cent growth. The present forecast has been revised up following data from the Ministry of Agriculture, Land Management and Cooperatives.

Ministry of Agriculture reveals that the decrease in paddy production stands at only 1.5 per cent to 5.1 million tonnes and production of summer crops like maize and millet is also expected to rise in this fiscal.

ADB macroeconomic update further said that the external sector stability is vulnerable over the medium-term with slow remittance growth and rising trade deficit.

“A sluggish rise in remittance income, higher trade deficit and a fall in net income in the first seven months of the current fiscal widened the current account deficit to $1374.1 million, significantly up from a deficit of $99.2 million in the corresponding period of last fiscal.”

Nepal requires massive investment in sectors like manufacturing, agriculture and infrastructure, among others, to cope with the existing bottlenecks to leap forward towards higher growth trajectory, said Sharad Bhandari, principal economist of the ADB Nepal Resident Mission. “Low investment is the major constraint to achieving the desired growth target.”

Nepal’s economy is largely driven by the services and agriculture sectors due to low contribution of the manufacturing sector in the country’s gross domestic product.

As per the Asian Development Outlook, the services sector will, however, remain buoyant given the expansion of wholesale and retail trade, financial intermediation and travel and tourism sub-sectors.

Growth in the Nepali economy is modest as compared to Asia’s average economic growth, which is projected to hover around six per cent in 2018 and 5.9 per cent in 2019.

The Asian Development Outlook has anticipated the annual inflation in Nepal to rise moderately to 5.5 per cent in this fiscal from 4.5 per cent of the previous fiscal. “Inflation as of mid-February moderated on the back of modest oil prices, ease in supply of goods, and subdued inflation in India – the major trading partner to whose currency the Nepali rupee is pegged,” said the macroeconomic update of ADB.

“It will nonetheless likely inch up in the remaining months of this fiscal as base effects erode and government expenditures increase with the fiscal transfers provided to meet spending needs of provincial and local governments and the planned disbursement of relief grants to earthquake victims.”

The average annual inflation is expected to edge up to six per cent in the next fiscal.

ADB also raised its 2018 economic growth estimate for developing Asia to 6.0 percent from 5.8 percent, citing solid export demand, but said U.S. protectionist measures and any retaliation against them could undermine trade.

Growth in developing Asia would only ease slightly to 5.9 percent in 2019, the bank said in its 2018 Asian Development Outlook. Strong external and domestic demand helped economies in the region expand by an average 6.1 percent last year.

The ADB now expects China’s economy to grow 6.6 percent this year, faster than the bank’s prior estimate of 6.4 percent made in December and by 6.4 percent in 2019.

Finance Ministry Cut The Budget Of Purchasing Newspapers And Printing Under its Austerity Measures By Agencies 11 hours, 26 minutes ago