For the European Union (EU), the unification of the two left parties guarantees “secularism”, implying the right to conversion being irreversibly placed in the statute. 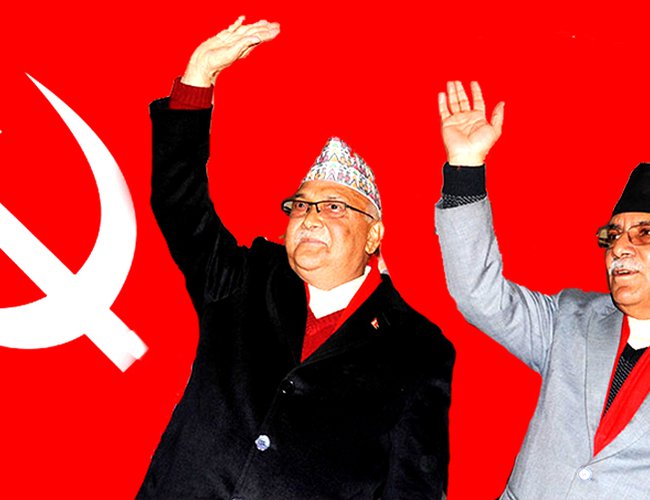 In the 68 years since the birth of the first communist party, the communist movement in Nepal has seen many ups and downs. Ideological debates and numerous splits have characterised the movement, with some groups even working in close alliance with the monarchy until 2006, ostensibly in the tactical defence of nationalism and national sovereignty. However, throughout, they did not abandon the talk of the need for a single communist party.

Communist unity was a promise that prime minister and UML chief K P Oli and Maoist chief Pushpa Kamal Dahal had made in early October last year, while announcing their pre-poll alliance. The two parties swept the polls, both at the Centre and in the provinces, and subsequently formed the government. However, the unification of the parties got postponed as the leaderships debated the Maoists’ claim for a fair share in party committees, over the election symbol, the recognition of insurgency as a people’s war, general amnesty to Maoists accused in human rights violation cases and so on.

The two parties have a history. They were not just political rivals but have been sworn enemies during the insurgency years. The CPN-UML had demanded deployment of the army against the rebels and the Maoists had targeted and killed a large number of UML cadres and supporters, accusing them of being “class enemies”. Even after the peace process began in 2006 with India playing a key role in bringing the Maoists to the centre of power politics in Nepal, the UML remained consistent in its demand for investigating human right violation cases and punishing the guilty. Subhash Nembang, deputy leader of the UML in Parliament, had ordered the government as the House speaker 10 years ago to sign the Rome Statuette and have the rights violation cases tried by the International Criminal Court. The order could not be implemented because of objections from the Nepali Congress, Nepal army and the Maoists.

Politics, however, makes for strange bed fellows. It is believed that the biggest concession the UML offered to the Maoists was that the Truth and Reconciliation Commission, in existence for the past three years, will be rendered powerless, with the Maoists not having to worry about cases. Many believe that the formation of the 441-member central committee, 43-member standing committee and the nine-member central secretariat on 55:45 (UML/Maoist) ratio, with Oli and Dahal continuing as “chairman” with equal powers and status till the party congress, would not have been achieved without Oli promising immunity to Maoists in cases pertaining to the insurgency era.

Oli seems the happiest with regard to the unification of the two parties. “Nepal’s journey towards prosperity and stability begins now,” he said. Habituated to sarcasm, he asked the demoralised main opposition, the Nepali Congress, not to get upset. “It happens in politics, and we have also suffered setbacks in the past.” The Nepali Congress fears that a the communists enjoying a post-poll two-thirds majority in Parliament is not a good sign for democracy in Nepal.

The fears are not unfounded. Not only is the opposition weak and demoralised, the judiciary is neither free nor fair. It has demonstrated total servility towards the legislature and executive in recent years. The absence of accountability in governance has become the norm and a demoralised civil administration provides the best conditions for the growth of authoritarianism and totalitarianism. However, the merger enhances the political credibility of the rulers and gives them a great opportunity to govern effectively.

The unification, thus, creates a situation of hope and fear for Nepal at the moment, but this major development will also be watched with interest by stakeholders in the international community. The unification took place a week after Indian Prime Minister Narendra Modi visited Kathmandu. Understandably, India was not in favour of communist unity as it may give China a much more powerful and trustworthy government in Nepal.

In fact, a senior Indian diplomat who had played a key role in bringing the Maoists to the centrestage of Nepali politics 12 years ago is believed to have advised Dahal against the merger. He has warned Dahal that it would reduce the Maoists to a non-entity, and that the international community, including India, would be happy dealing solely with Oli. Oli will be visiting China next month as the most powerful leader of Nepal in recent history, but what will matter is how he delivers on promises and whether he respects democratic values and norms.

For the European Union (EU), the unification of the two left parties guarantees “secularism”, implying the right to conversion being irreversibly placed in the statute. The recent visit of Narendra Modi, his display of a Hindu face, and a common pledge by the two prime ministers to promote culture and religion, initially by linking the Buddhist and Ramayan circuits, is being seen as Nepal pursuing a Hindu agenda. Although the EU may not be happy over the likely death of the transitional justice system and the neutralisation of the Truth and Reconciliation Process, the promise of Nepal continuing as a secular republic will be a big respite for the EU.