The Third Convocation Of The South Asian University In New Delhi

The Secretary General recalled the vision of the South Asian University evinced by the former Prime Minister of India, Dr. Manmohan Singh, during the Thirteenth SAARC Summit in Dhaka in November 2005 and his offer to host the University in New Delhi 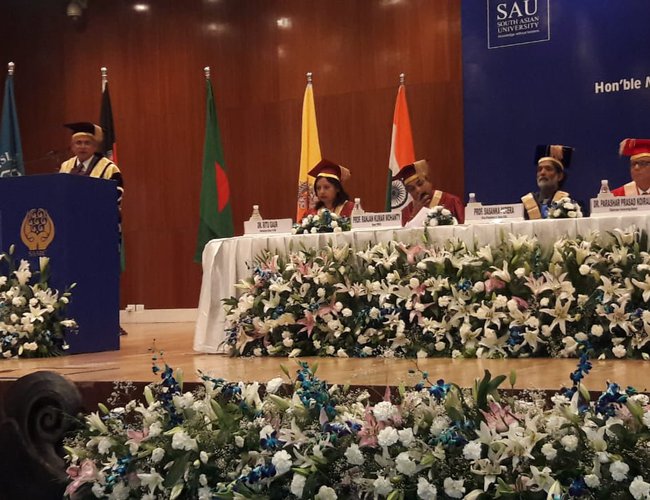 Visitor’s Nominee Giriraj Mani Pokharel, Minister for Education, Science and Technology of the Federal Democratic Republic of Nepal, and Chief Guest Dr. Vinay Sahasrabuddhe, Member of the Parliament of the Republic of India, graced the Convocation with their august presence. They also addressed the Convocation.

In his Address at the Convocation, the Secretary General recalled the vision of the South Asian University evinced by the former Prime Minister of India, Dr. Manmohan Singh, during the Thirteenth SAARC Summit in Dhaka in November 2005 and his offer to host the University in New Delhi. He stated, “The establishment of the South Asian University is the manifestation of the determination of the Member States to promote regional engagement in education.  As a Centre of Excellence, the University is a beacon of hope for our youth who are our future.”

On the auspicious occasion of the Third Convocation, the Secretary General congratulated the distinguished Members of the Governing Board, President, Vice Presidents, Registrar, faculty, members of various Committees, staff and students of the South Asian University.  He also felicitated the students who were graduating from the University this year.

According to press release issued by Secretary General of SAARC, citing the importance of education, the Secretary General said, “As we all know, education is of utmost importance to develop our youth into valuable assets for our society. With education, our youth is equipped with the talent and capability for promoting socio-economic development, contributing eventually to the welfare of the peoples.  Education is a sine qua non for alleviating poverty from the region, which has about 40% of the world’s poor.”

One of the primary objectives of SAARC as enshrined in its Charter is to “provide all individuals the opportunity to live in dignity and to realize their full potentials.” As education empowers people, allowing them to realize their potentials, it has been one of the fundamental areas of focus of SAARC. Furthermore, SAARC recognizes literacy as a fundamental human right, the Secretary General said in his Address.

The Government of India has allocated 100 acres of land in Maidan Garhi, South Delhi, and funds required for constructing a permanent complex of the University, which is currently underway.

The Kathmandu-Terai/Madhes Fast Track To Complete By 2024 By NEW SPOTLIGHT ONLINE 1 day, 3 hours ago

Madhesh Based Party Demand To Include Its Agenda In The Amendment By NEW SPOTLIGHT ONLINE 2 days, 2 hours ago