US Ambassador to Nepal Alaina B. Teplitsh, in partnership with Minister for Health and Population Upendra Yadav handed over the newly reconstructed Barhabise Primary Health Care Center in Sindhupalchowk District. 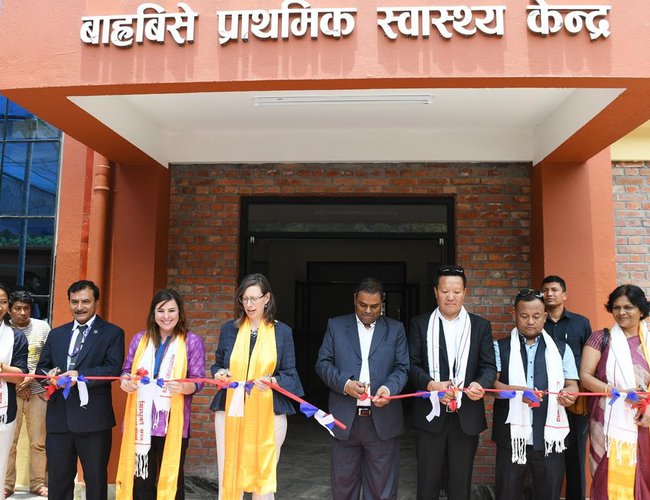 US Ambassador to Nepal Alaina B. Teplitsh, in partnership with Minister for Health and Population Upendra Yadav handed over the newly reconstructed Barhabise Primary Health Care Center in Sindhupalchowk District.

During the handover ceremony, Ambassador Teplitz said, "For over 70 years, the United States and Nepal have shared a mutually beneficial relationship. The 2015 earthquakes caused unimaginable devastation, displacing families, destroying schools, and damaging health facilities. The IT in Difficult Times wrote This cradling a helping hand most used means; and we are proud that the United States was able to demonstrate our deep friendship with the government and people of Nepal in this time of need. "

According to press release issued by U.S. Embassy in Kathmandu, this project $ 1.8 million reconstruction was made possible due to the generous support of the American people through the US Agency for International Development (Ushaid). The project - which included constructing two new buildings, renovating an existing building, and fully equipping all buildings according to Ministry of Health and Population standards - was implemented by the US Army Corps of Engineers under a contract with the Creative Builders Concern, Ltd.

The Barhabise Primary Health Care Center is the first health facility that was rebuilt with USAID funds following the 2015 earthquakes. USAID and the Ministry of Health and Population identified this health facility as a high-priority for reconstruction due to the large number of patients it serves; The 15-bed facility provides primary healthcare services to a remote population of 112,000, including vulnerable infants and mothers suffering from high-risk pregnancies and deliveries.

Since the 2015 earthquakes, were the Government Invested More Than $ 190 Million in Earthquake Response and Recovery. USAID has trained more than 15,000 engineers, contractors, Arcitechts, masons and carpenters on earthquake-resistant construction techniques and helped homeowners to rebuild over 16,000 homes using modern safety standards. In addition, USAID is in the process of rebuilding six more health facilities to provide improved access to quality health services to over 229,750 earthquake-affected individuals.