From ‘Mad Men’ To Statesmen?

From the very beginning, it was believed that the summit would center on nuclear disarmament. And it did just that. A document signed by the leaders included a pledge from Mr Kim to rid the Korean peninsula of nuclear weapons, which was a huge announcement. 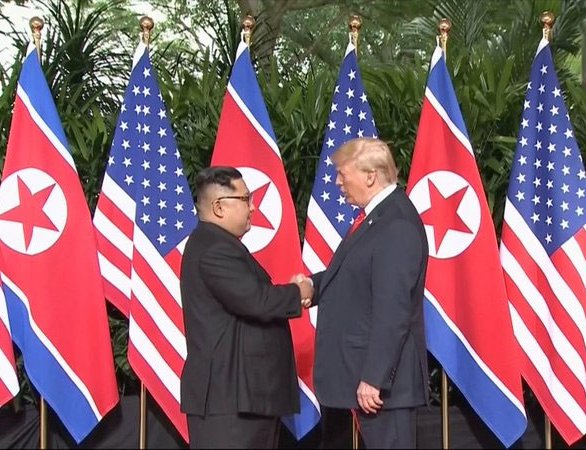 In September 2017, US President dubbed North Korean leader Kim Jong Un as ‘Rocket man’ in his tweet reducing the latter to nothing more than a ‘mad man’ with a missile. Pyongyang acknowledged receipt of this message a few days later questioning Trump’s mental health. The US president was in no mood to swallow the insult and pat came the reply - “Why would Kim Jong-un insult me by calling me ‘old’ when I would NEVER call him ‘short and fat?’”

Going by the statements, one would be forgiven for thinking that this was two school boys fighting. But what nobody would have thought was that nine months after trading such insults, these two world leaders would be making history by meeting each other in person.

On 12 June, a truly extraordinary scene played out in Singapore - Trump and Kim shaking hands. Millions of people all over the globe waited with baited breath for visuals of the first handshake between the two leaders. Preceded by a series of dramatic events - the US President canceling the meeting, Kim meeting the South Korean President for the second time in a rush and Trump again reversing his decision - it was an event many thought they would never see in their lifetimes.

From the very beginning, it was believed that the summit would center on nuclear disarmament. And it did just that. A document signed by the leaders included a pledge from Mr Kim to rid the Korean peninsula of nuclear weapons, which was a huge announcement. But in an extraordinary media conference later, Mr Trump announced details not in the paper - he said he would halt US military exercises in South Korea, something widely seen as a concession. Although many details remain unresolved, including the concrete steps that North Korea will take in the denuclearization process, the two broad agreements in themselves are very significant considering the fact that Trump and Kim were meeting for the first time. Although observers warn against prematurely heralding the summit as an achievement, it is definitely a turning point in the relationship between the two countries.

Apart from two significant outcomes, a major outcome of the summit is the change of image it has brought about for both Kim and Trump. While on one hand, Trump achieved what no other sitting President had achieved in the last 60 years, Kim was able to shed his ‘dictator’ image and came out as a friendly ‘leader’ of a country who was extending a hand of friendship. For Kim, who runs a totalitarian government, the change of image might not be significant in his country, but in the global stage it is a big achievement. In the face of ruthless attacks from media and politicians alike, for the US President, the summit will serve as a big factor to shut his critics’ mouths.

A third person who is going to be happy is the Chinese President, Xi Jingping. Xi hosted the North Korean leader twice before the long-anticipated summit and experts believe he played a vital role in making the meeting possible. Trump himself expressed this view when he said that ‘for various reasons, maybe including trade ...it could very well be that he (Xi Jingping) could be influencing Kim’. Amidst a barrage of sanctions against his nation, there are chances that Kim could have sought the Chinese President’s help in finding a way out for his country. Xi, in turn, could have suggested extending a hand towards the US. The summit is certain to give Xi brownie points for his handling of North Korea and cement China’s existing influence in the impoverished nation.

All in all, the event of 12 June is undoubtedly a turning point in the relationship between the two countries. How situation plays out in this changed scenario, we will have to wait for sometime to see.