Rural Autonomy Not Realized Yet

Elected a year ago, Norbu Syangbo Ghale chairperson of Naukunda Rural Municipality of Rasuwa District, has his own experiences to share. Elected on the slogan of brining Singha Durbar to the Rural center, Ghale is yet to see any changes in the style of governance. Ghale spoke to KESHAB POUDEL at his Rural Municipality office. Excerpts: 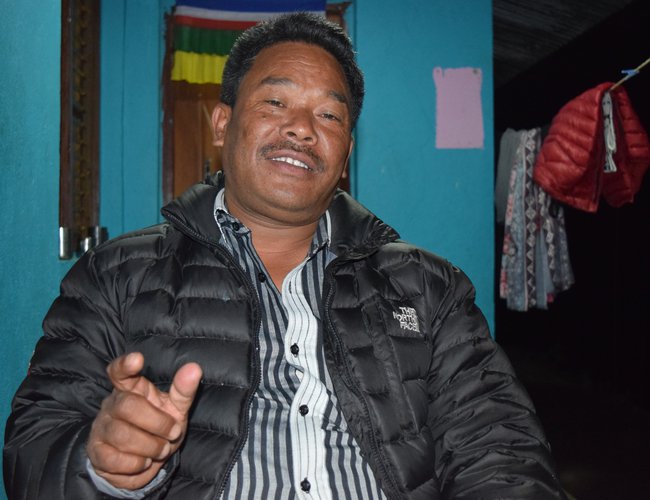 How do you see the state of municipality?

Nothing has changed much. Although I was voted on the slogan to bring Singhdurbar to Naukunda, the centre and province are yet to agree on the devolution of authority and resources.

Writing in a paper alone cannot make changes happen. As long as the attitude of the people remains centralized, it merely does not make sense to talk about devolution. Earlier, Rural Municipality used to be under the center. However, we have to go now to two places for the same work. Along with the center, we also need to go to province, which controls everything.  I have to visit Kathmandu and Hetauda to bring the budget for Rural Municipality.

What about the local autonomy then?

We are autonomous only in paper. It will take a long time to implement the idea. I told you, why do we need the second tier when the local levels have the capacity to implements development programs. Even District Coordination Committee wants to control us. What I can say is that the autonomy is only in paper but the circumstances are different in the ground.

What are the problems in your area?

There are a number of problems. Although we are very close to Kathmandu by distance, Naukunda is one of the remote parts of Rasuwa. We don’t have enough schools, roads and drinking water facilities. People still walk almost a couple of hours to fetch a bucket of water.  Following the earthquake, much of the old watershed disappeared and roads were washed out. After the washing of water intake and other infrastructure for drinking water by dry landslides during the earthquakes, residents of Thaddod Village of Naukunda Rural Municipality-1were complled to walk almost three hours to fetch a bucket of drinking water. With no water source available nearby to meet the demand of water, local community faced difficulty to provide enough water to cattle. Many even sold livestock because of unavailability of water nearby.

How about your elected committee?

Although our committee is mixed, representing three different parties, Nepali Congress, Nepal Communist Party and Naya Shakti, all of us are working in close coordination and cooperation to develop our area. We take the decision on the basis consensus. In the last one year, almost all our decisions were taken on the basis of consensus. We gave up our party stand when there was the issue of development.

Since the Rural Municipality has also the authority to formulate the acts and carry out judicial functions, what do you have to say about this?

For your information, we have already passed three acts related to use of local resources and carried out other development activities. Our council has already passed the budget twice. We do discuss on the bill before placing it for endorsement. So far as judicial power is concerned, our vice chair person is taking care of it. She has already resolved a couple of cases at the local level.

On what basis do you select the projects?

The projects are selected on the basis of needs of the wards and people. Following the recommendations of ward office and  technicians, we allocate the budget.

How do you see the role of NGOs and INGOs?

In case of my municipality, they have made immense contributions. For instance, LWF and its partner organizations including BATAS foundation have made enormous support to complete the reconstruction of houses and infrastructures.  With their support, we have almost completed half dozens of drinking water and irrigation projects. They also supported our people in livelihood along with reconstruction of private houses. Our village can show how local elected bodies and NGOs and INGOs work together to uplift the life of rural people.

Why do you prefer them?

NGOs and INGOs have money and technical experts and we have projects.  The financial and technical support provided by NGOs and INGOs helped a lot in our village. I don’t want to boast, what I can say is that you can go, see for yourself how we successfully work with them.

What is a major project you have completed recently?

Although rehabilitation of old pipeline solved the problems of 40 households, the large numbers of people living around the village don’t have any access. Since a water source is far away or 3000 meter high above the sea level, the estimated cost of the project was 7.8 million rupees which LWF’s partners alone cannot afford.  We have contributed Rs. 3.1 million to a Rs. 4.5 Million fund promised by LWF Nepal in partnership Batas Foundation and supported by IRW-DEC and community user group agreed to contribute labor equivalent to Rs.600, 000.00. With a capacity to supply drinking water to 136 households, Udeng Drinking Water Project has completed now.

How do you see your first year’s performance?

I am personally not satisfied with my first year performance. We have spent our first year to establish our institutions, including ward office and Rural Municipal office. Although we have completed the reconstruction of earthquake devastated rural infrastructures, including drinking water and irrigation and also completed reconstruction of private housing with support from INGOs and  NGOs, we are unable to make major breakthrough in the construction of roads.

What is your target for the coming year?

Our municipality’s focus will be to turn our rural road to all weather. Expansion of schools and health posts are our other priorities. Since our Municipality is just behind Gosaikunda Lake with some important ponds on our side, we want to develop road to link these areas. We are also considering to invite private sector to exploit hydropower potential of our area. Since our village has potential for off season vegetables, municipality is considering to encourage farmers to produce  off season vegetables.

What is the major stumbling block for development of the rural municipality?

We don’t have adequate resources and human capital. We have to rely on engineers and other technical staffs from outside. Similarly, the centralized mentality of central and provincial leaders is another major stumbling block. We need to have power as stipulated in the constitution.

The Fourteenth General Convention: An Aspiration Of NC’s Reawakening By Arjun Narasingha KC 3 days, 6 hours ago

Nepal's Stand Is For Truth To Prevail, Come What May: DPM Pokhrel By NEW SPOTLIGHT ONLINE 3 months, 3 weeks ago

Nepal Is Ready To Face With India, Ultimately Truth Shall Prevail: DPM Pokharel By NEW SPOTLIGHT ONLINE 4 months, 1 week ago

How Can An Employer Pay Full Salary To Employees Without Income? Senior Advocate Dr. Gandhi Pandit By NEW SPOTLIGHT ONLINE 4 months, 2 weeks ago

With Focus On Children, WVIN Has Done Well: Ginting By A Correspondent 6 months, 2 weeks ago