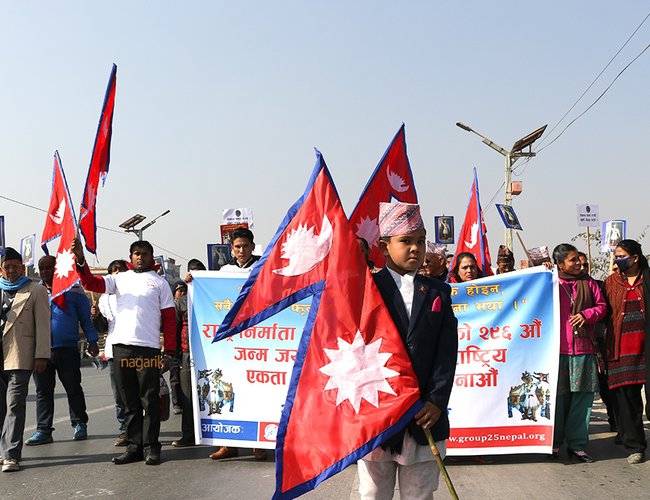 Royal Nepal Academy, established by King Mahendra had published a Nepali dictionary with corresponding words of five of the other ethnic languages of Nepal. Later, during King Birendra’s time, Tribhuvan University (TU) decreed that the goal would be to conduct all higher studies instruction in Nepali except that for specific languages. This action alienated indigenous Newari speakers and many feel led to alienation plus downfall of the Panchayat and later of the monarchy.

As a consequence, the Institute of Medicine encouraged teachers to bring out books with texts in both English & Nepali for health assistant and nursing students. An English-Nepali dictionary of technical terms was prepared by two faculty members. Motive was that if Japan and China could conduct the learning in technical subjects in their respective languages, then why couldn’t we?

Subsequently in the 1970s, the government thought that primary education should be done in Nepali and so this rule was implemented. After a number of years, when it became apparent that many parents sent their children out of the country, the rule was relaxed. In conjunction with this relaxation the students were allowed to sit for various external examinations boards such as Cambridge, International Baccalaureate and the Higher Secondary School examinations of India. Following the Andolan I of 1990 there was even more relaxation and more educational institutions were set up in the country bowing down to popular demand that instruction should be in English. However if one talks to the students of those times, many tend to rue the fact and some feel that they were a ‘lost generation’. They felt handicapped and never able to really compete and excel in their studies.

Following the Andolan II and the stress on Lingua Franca, there is again much stress as far as the spoken word is concerned. Each group of individuals have great pride in their mores and customs and want it retained for future generations. Nepal is said to be lucky in that we still have people using their mother tongue for the conduction of their day to day affairs. True not all the languages have their scripts but with the development of new technology it is possible to record these and perhaps even transcribe them in the future. One remembers that a few months ago the last remaining Kusundo language speaker died. Alas, this heritage is gone forever. More recently two new dialects of the Kirat mother tongue – Yakhkha have been recently discovered.

The ideal would be to study further and record in both written and audio form the remaining languages for posterity. It is estimated that there are currently in this world 3,866 languages with written scripts! One is not in a position to state how many of these will survive in future years.

The Amharic language of Ethiopia is said to be the first in terms of written and spoken forms. A book on the Aryans states that a certain tribe which had no vocal ability was taught to speak by uttering the syllable ‘Om’ and then others. Nepali as we know it is derived from the Indo-Germanic group whilst some of the other ethnic Nepali languages are from the Tibeto-Burman family. The languages in each group are manifold from among Arabic, Bantu, Burmese, Chinese, Hindi, Japanese, Korean, Latin, Swahili, Thai, Turkish and etc. But this is not the end of the story for there are the scripts too in which the languages are transcribed. One has only to think of the Arabic, Chinese, Cyrillic, Devnagari, Greek, Hebrew, Konkani etc. The Turkish and Bhasa Indonesia changed from the Arabic to the Roman script. The Konkani language can be written in five scripts! Will tackling this language problem can perhaps land one in a quagmire?

Coming now to the current situation in Nepali one is aware of different thoughts on what the official language of the country and of the different provinces should be. The old Nepali with sounds such as ‘lri’ & ‘lili’ are things of the past. A surreptitious attempt was made to modernise the Nepali script and make it compatible for computer use but this failed. A rational action would be to make Nepali computer friendly so that more persons become adapted to use it extensively.

Recent reports from province 7 state that a number of Sanskrit schools have been closed because of lack of students. Many Community Schools, including those in Bhaktapur, seeing decreasing enrolments have changed over to teaching of the different subjects in English to attract students who intend going elsewhere for studies. Even in TU some Central Departments including that of Sanskrit, Hindi, Urdu and even Newari have been closed for lack of students. Faculty members are without teaching responsibilities. Is this a sign that our education system needs to be overhauled so that more stress is laid on apprenticeship type of training imparting working skills rather that book knowledge. One hopes that the newly announced Education Commission will solve the many existing issues.

What has to be realised too that with the dawn of the computer age and internet facilities, knowledge, skills and attitude have become more centred on the learner. The search for knowledge, its acquisition and application is tied up with the enthusiasm and effort of the individual concerned.

In former years, some had even thought of the possibility of having a world language so that people could communicate easily. Of the limited efforts, the one best known was Esperanto. It is said that the Nepali word ‘musa’ for mouse is included! A very pious and noble thought but I shudder at the consequences. It would be like putting the whole world in a straight jacket! New and fresh thoughts in various parts of the world would never occur. How dull would the world be when variety is the spice of life!

Book : Alternative Development Paradigm By A Correspondent 1 month, 1 week ago

BOOK On Indian Philosophy By A Correspondent 3 months ago