Nawaz And Maryam Sharif's Arrest: A Huge Risk - And A Political Masterstroke

Pakistan's 2018 election is being seen as entirely managed by the deep state. But the former PM and even his brother Shehbaz could upset the plans of the military. 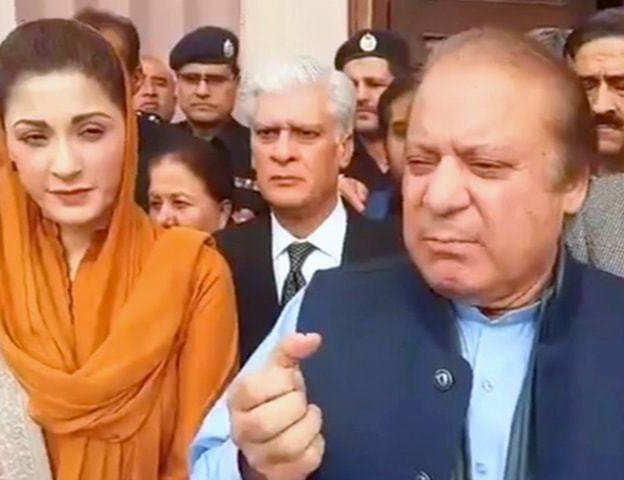 Last week, when it came to light that the Sharif father-daughter duo will be returning to Pakistan to court arrest, there was a lot of speculation on what exactly this would mean for the PML (Nawaz) party and the Sharif family? Was this the beginning of the end? Is this what the Pakistani Army wanted or were they stumped by the genius of Nawaz Sharif? Or, was this the master stroke that was needed for yet another PML(N) wave?

To begin with, the singling out of one political party, the concerted effort in its persecution, show that the establishment in Pakistan wanted Nawaz out of the equation ahead of the elections. It is also not untrue that Imran Khan is the blue-eyed boy of the Pakistani Army, the “PM select”, as Bilwalal Zardari Bhutto put it when he was stopped from going to Peshawar to attend a campaign rally — but Imran Khan was allowed to travel. So, the daring move by Nawaz Sharif did indeed unsettle the powers that be; those who continue to maintain a facade of a democratic set-up, yet put the very same democratically elected government in jeopardy when things don’t go their way.

For Nawaz Sharif, this began when he dabbled with the idea of engaging India — something that really did not go too well with the establishment. Then, the huge faux pas of keeping “Kashmir” out of the Ufa Declaration that left Pakistan fuming. One wonders if this was done by design or was an oversight of the Pakistani officials handling the final document. Either way, Nawaz Sharif had to make amends for trying to step into an area that has always been the holy space of the Pakistani military, Pakistan’s India/Kashmir Policy.

But, the Army should know that Nawaz Sharif is a product of the establishment and knows them inside out.

So, even if his popularity was waning because of all the corruption cases against him and the indictment, him returning to face the laws of the land, rather than live in exile like his bête noire, General Parvez Musharraf, has made him a hero overnight.

Many thought that Maryam Nawaz Sharif’s political future would come to an end even before it began — but that again is not to be. The emotional scenes of meeting her mother Kulsoom, who is extremely ill, at a hospital in London and then bidding her children goodbye stirred emotional chords back home. Her statements daring those who want the family to become irrelevant and then, her refusal of any special treatment in Adiala jail has shown she has more mettle than many would’ve imagined.

The mess that has been created because of the meddling by the deep state, so they could have a favourable outcome in the upcoming elections, have come a cropper. It has also allowed the people of Pakistan to see through the divisive and often destructive ploys of the Pakistani military undermining the civilian supremacy.

It would not be a surprise if PML(N) gains ground because of the brave decision by Nawaz Sharif to take on the regime and ensure a political future for the Sharif family.

In this, one also has to see which of the Sharifs are to gain with this sacrifice. This could very well be brother Shehbaz Sharif’s time as the elder of the two men and his daughter stand disqualified. It is time for Shehbaz and his son Hamza to consolidate their position.

Shehbaz played his cards well balancing his role in the party, his role as the Chief Minister of the Punjab and his relations with the Army. His recent statements, distancing himself from his brother’s statement, where Nawaz blamed the Pakistani Army of political persecution, shows the former's instinct to survive.

Survive PML (N) will. Survive Nawaz and Maryam also will. But, Shehbaz and Hamza Sharif will more than survive.

For the Army, a weak coalition is the best option with Imran Khan leading that coalition. But, with Imran Khan’s campaign mired with myriad controversies and refusing to ally with PPP or PML(N), and a defiant Nawaz Sharif gaining popularity yet again, the only option that the military has is to seek an understanding with Shehbaz Sharif — who could very well be the Prime Ministerial candidate for PML (N).