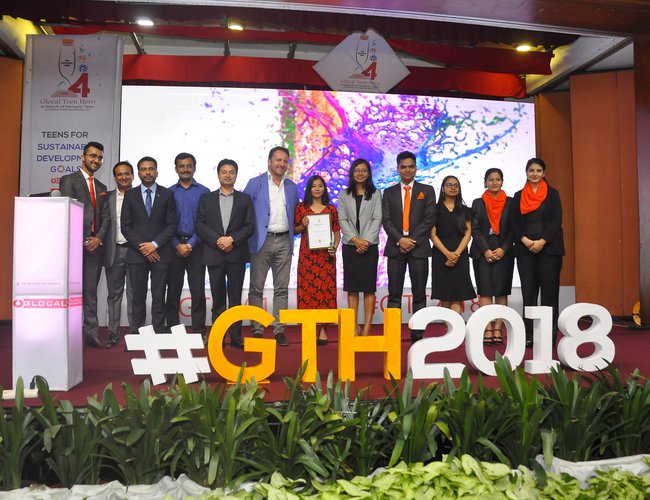 Prashansha is an enthusiastic youtuber, film maker, social activist and poetess. On September of 2017, she, on behalf of World Experience Foundation, initiated a project to spread awareness about kidnap marriage and child marriage. She created a document art about this campaign with purpose to educate, aware and encourage the viewers to make changes in their society. Further, she is planning and designing a project called 'A Word A Step Ahead'. The award was handed by Minister of Labour, Employment and Social Security- Gokarna Bista and all the jury members.

This year’s competition had received over 532 applications, from fascinating teenagers demonstrating the diverse potential of this often under looked age-group of people. The applicants had demonstrated their skills and expertise, and made an impact in their society, from areas like social work to journalism, from mobile app development and computer programming, to robotics, and from entrepreneurship to community development among others.

Glocal Teen Hero is the only national platform in Nepal to recognize and honor the outstanding teenagers. It is a platform for Nepali teenagers to share their initiation, creativity, and enthusiasm which will then motivate them and more of the other teenagers in the nation to develop an entrepreneurial thinking.

This is the fourth edition of the first ever program designed in the country to recognize dedicated, passionate, and innovative teenagers so as to encourage their initiatives. Bipana Sharma, a 17-year old child rights activist from Sunwal, Nawalparasi, and Santosh Lamichhane, young robot inventor were felicitated with the First and Second Glocal Teen Hero awards in the years 2015 and 2016 respectively. Similarly, Sachin Dangi, 18, Social Activist was felicitated Wai Wai Glocal Teen Hero in 2017.

Started from inside the Kathmandu valley only in the year of inception, the competition this year had reached out to teenagers nationwide and conducted interactive sessions in various schools, colleges and communities. This year, the total reach to teenagers was 50,000+ after conducting activation and information session in different schools and colleges of Nation.

To make the program a grand success, this year, Glocal has partnered with Wai Wai as a title sponsor. It is promoted by SAARC Chamber of Commerce and Industries and Nepal Tourism Board. European Union and UNDP are the Strategic Partner, Soaltee Crowne Plaza is the initiative partner. Likely, Coca-Cola, VOITH, Panchakanya and Honda as Partners, Turkish Airlines and Yeti Airlines as Airlines Partner. In addition, Prisma Advertising as Creative Partner and Sparrow SMS is the SMS Partner. The initiative is supported by Tara Air, Landmark education, Worldlink, IMS Group, IME, AYON, YUWA, Restless Development, Facts Nepal, SmartDoko, View Your Choice, YesClub Nepal & Khubiliti. Partnership with various such organizations working on youth-segment helped the program reach every nook and corners of the country, and ensured no teenagers having talents and potential were left-out from the competition.

The selection was based on their resume, the evidence and an essay on their accomplishment.

After SMS voting round, the finalists were then individually interviewed on the basis of attitude, vision and aptitude by the panel of judges and Prashansha KC was declared as the Fantastic Teen for the year 2018.

The action-packed award ceremony held at Soaltee Crowne Plaza today was attended by 250+ personalities of Nepal from different walks of life, such as diplomats, politicians, film stars, entrepreneurs, educators, youth leaders and many more.

Wai Wai Glocal International Teen Conference (GITC) is an international conference for teenagers in Nepal and abroad. GITC is an opportunity for teenagers to authentically address issues that are important to them without having to overcome generational barriers. The conference showcased the ideas, experience, and stories of the teenagers from different countries like India, Afghanistan, Bangladesh, Nepal, Jamaica, Ghana, Vietnam, Bangladesh etc. through series of panel discussions and presentations. The panel majors on Entrepreneurship, Empowerment and Socio-Perspective.

The main objective of this conference was to be the platform of the Global Teenagers’ Meet and set an example of teenagers who have worked in countries with more difficulties and spreading a positivity that things are possible with efforts. It is a platform for knowledge and experience where teenagers can learn about leadership, empowerment and social impact through a participatory and interactive environment with their peers from all over the globe.

Four Arrested With Red Panda Hide In Karnali By Agencies 2 days, 3 hours ago

FDA Approves Remdesivir As The First Drug To Treat Coronavirus By Agencies Oct 23, 2020