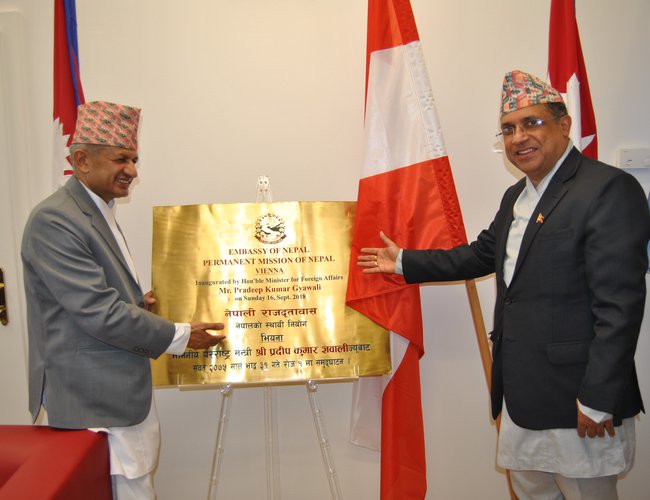 Minister for Foreign Affairs Pradeep Kumar Gyawali inaugurated the Permanent Mission/Embassy of Nepal in Vienna amidst a special function organized at the Embassy premises this afternoon.

Speaking on the occasion, minister Gyawali highlighted the major foreign policy priorities of the Government of Nepal. He expressed hope that the Embassy would be instrumental in enhancing Nepal’s engagements with the United Nations Office and International Organizations based in Vienna as well as in strengthening Nepal’s bilateral cooperation with Austria and other countries the Embassy is accredited to.

According to a press release issued by Ministry of Foreign Affairs, minister Gyawali arrived in Vienna this morning leading the Nepali delegation to the 62nd regular session of the General Conference of the International Atomic Energy Agency (IAEA). The General Conference will be held at the Vienna International Center from September 17 to 21, 2018.

Minister Gyawali is scheduled to address the plenary session of the Conference tomorrow. He will also hold a bilateral meeting with his Austrian counterpart Her Excellency Karin Kneissl.

He was received at the Vienna International Airport by H.E. Mr. Prakash Kumar Suvedi, Ambassador of Nepal to Austria and Permanent Representative of Nepal to the United Nations in Vienna.

Nepal Is Successful To Contain Spread Of Coronavirus: PM Oli By NEW SPOTLIGHT ONLINE 45 minutes ago

Japan To Celebrate May 26 As “Hirotaka Takeuchi 14 of 8000m Mountains Summit Day By NEW SPOTLIGHT ONLINE 5 hours, 30 minutes ago