Vice President Pun Thanks Chinese Companies For Investing In Nepal

Vice President Pun Thanks Chinese Companies For Investing In Nepal 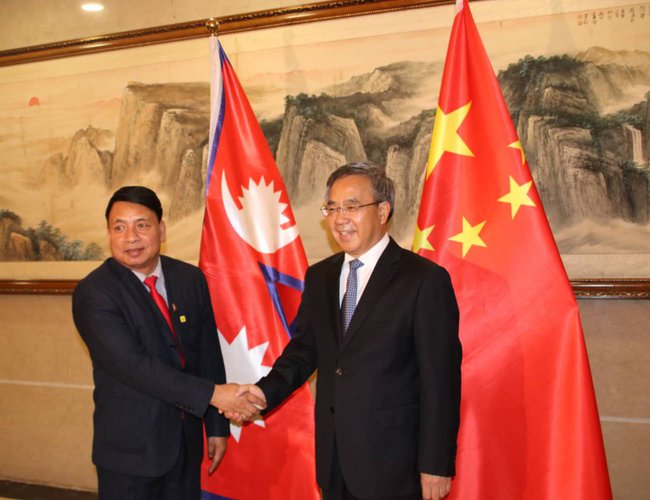 Peng Qinghua, Secretary of the Sichuan Provincial Committee of the Communist Party of China (CPC) met Nanda Bahadur Pun, Vice President of Nepal this morning in Chengdu. During the meeting, various aspects of Nepal-China relations including promotion of connectivity, tourism, culture, investment, agriculture, and people-to-people contacts under the broader framework of Belt and Road Initiative were discussed.

Also Vice President was called on by the Secretary of Yibin Municipal Committee of CPC Liu Zhongbo this afternoon. The Vice President expressed his happiness over the recent establishment of sister city relationship between Pokhara and Yibin City and wished for expanding the relations in agriculture, technology, education and tourism sectors, among others, in the days to come.

In a separate program today, the Vice President Pun also interacted with the leaders of Sichuan Investment Group Company and thanked them for their initiative to invest in various sectors, including hydropower in Nepal and assured them of full cooperation from the Government of Nepal.

Vice President and the delegation arrived Yibin City this evening and will visit industrial enterprises and other development projects during his stay.

According to a press release issued by Embassy of Nepal Beijing, the Vice President is also scheduled to visit Lizhuang Ancient Town of Sichuan Province before returning home on September 24.

COVID-19: Number Of Children Living In Household Poverty To Soar By Up To 86 Million By End Of Year By NEW SPOTLIGHT ONLINE 5 hours, 49 minutes ago

Twelve Nepali Migrant Returnees Killed and 20 Injured In a Bus Accident In Banke By NEW SPOTLIGHT ONLINE 15 hours, 59 minutes ago