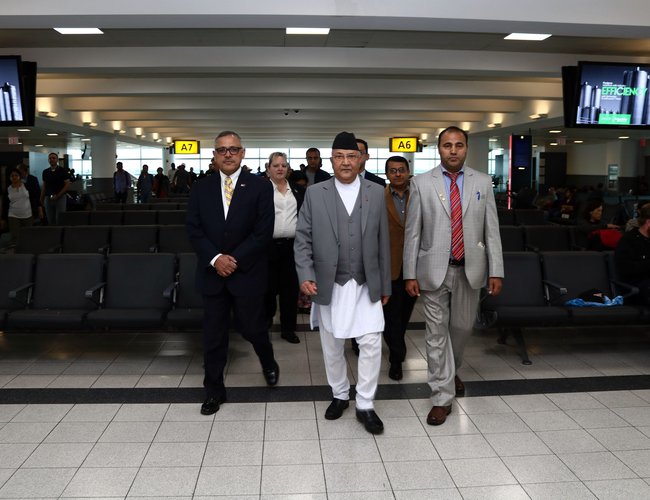 K. P. Sharma Oli arrived in New York to lead the Nepali delegation to the 73rd session of the United Nations General Assembly (UNGA).The Prime Minister is accompanied by his spouse Radhika Shakya.

The delegation was welcomed at the John F. Kennedy International Airport by Arjun Kumar Karki, Ambassador of Nepal to the United States; Nirmal Raj Kafle, Chargé d’Affaires a.i.; and other officials of the Permanent Mission and Consulate General of Nepal in New York.

The high-level segment of the UNGA is scheduled to begin on 25 September 2018 with the theme, "Making the United Nations relevant to all people: global leadership and shared responsibilities for peaceful, equitable and sustainable societies". Altogether 121 heads of state/government will attend this year’s session. The Prime Minister will address the United Nations General Assembly on 27 September 2018 and will hold bilateral meeting with the UN Secretary-General Antonio Guterres onthe same day.

The Prime Minister will deliver a statement at the Nelson Mandela Peace Summit tomorrow which is being organized here to commemorate the centenary of the birth of Nelson Mandela. Also tomorrow, the Prime Minister and Mrs. Shakya will attend the reception to be hosted by President of the United States of America Donald Trump and Mrs. Trump.

The Prime Minister will also speak at the high-level meeting on Action for Peacekeeping (A4P) being hosted by the Secretary General of the United Nations on 25 September 2018.On the same day, the Prime Minister will deliver a public lecture on the theme, "Peace, Democracy and Development" at the Asia Society. The event will be moderated by The Hon. Kevin Rudd, former Prime Minister of Australia.

On the sidelines of the UNGA, the Prime Minister is scheduled to hold separate bilateral meetings with Samdech aka MohaSenaPadeiTechoHun Sen, Prime Minister of Cambodia; Justin Trudeau, Prime Minister of Canada; Alain Berset, President of Switzerland; and Theresa May, Prime Minister of the United Kingdom. During his meeting with the Canadian counterpart, Nepal and Canada are going to formalize the establishment of a Bilateral Consultation Mechanism.

According to Press release issued by Permanent Mission of Nepal to the United Nations, New York Separately, Minister for Foreign Affairs, Pradeep Kumar Gyawali will participate, among others, in the Ministerial Meetings of the group of NAM, G77, LDC, LLDC and Group of Friends of Mediation.

The Foreign Minister will also host informal Ministerial Meeting of SAARC on 27 September 2018. He is also scheduled to hold separate bilateral meetings with his counterparts from various countries and senior UN officials including Deputy-Secretary-General Amina J. Mohammed.

I Am Here To Further Strengthen Our Ties With Nepal: General Wei Fenghe By NEW SPOTLIGHT ONLINE 4 hours, 48 minutes ago

India Will Supply COVID-19 Vaccine To Nepal Once It will be Approved For Use In India By NEW SPOTLIGHT ONLINE 3 days, 5 hours ago

UN In Nepal Expresses Concern Over Rape And Killing In Bardibas By NEW SPOTLIGHT ONLINE 3 days, 7 hours ago