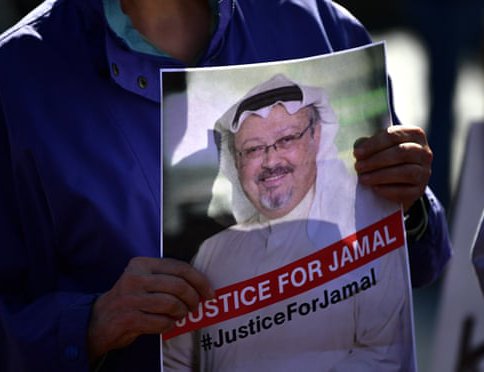 Saudi Arabia has confirmed the death of missing Saudi journalist and Washington Post columnist Jamal Khashoggi, claiming he died in a fist fight involving more than a dozen Saudi officials at the country's consulate in Istanbul.

After 18 days in which it insisted it had no involvement in the journalist's disappearance, Riyadh conceded that Khashoggi died as a result of the altercation after he had come to the consulate to obtain paperwork needed for his upcoming wedding.

An announcement carried on Saudi state TV said discussions between Khashoggi and officials at the consulate quickly turned violent, and ended in his death.

Five high-ranking officials have been removed from their posts, including the deputy head of the Saudi intelligence service, and 18 Saudis have been detained, state TV said.

The statement was the first official confirmation of Khashoggi's death in Turkey 18 days ago, and the first acknowledgment by Saudi Arabia of its role in it.

"The Kingdom of Saudi Arabia expresses deep regret at the painful developments that have taken place in this case and affirms the commitment of the authorities in the Kingdom to bring the facts to the attention of the public and to hold accountable all those involved," the statement said.

Khashoggi disappeared after going to the Saudi Arabian consulate in Istanbul at about 1:15 p.m. on October 2 to obtain paperwork to marry his Turkish fiancée, Hatice Cengiz. She raised the alarm just before 5 p.m, while she was still waiting outside.

According to the Saudis' explanation, discussions between Khashoggi and those who met him on his arrival at the consulate led to an argument and physical altercation. Those responsible then tried to cover up the death, state TV said.

The Saudis have set up a commission, led by Crown Prince Mohammed bin Salman, that will restructure the Saudi general intelligence directorate and will have one month to release a report, state TV said The commission will consist of national security officials, the foreign ministry and the interior ministry.

When asked if he found the Saudi explanation credible, US President Donald Trump said he did.

He called the official statement from Riyadh a "good first step" and said talks with Saudi officials would continue, including raising some questions about their account of events.

"I think we're getting close to solving a very big problem," Trump said.

He added that Saudi Arabia has been a "great ally in the Middle East," but that "what happened is unacceptable."

Trump said he would work with Congress to develop a response to Khashoggi's death, but said that he didn't want sanctions to affect US arms sales to the kingdom.

"I would prefer if there is going to be some form of sanctions -- this was a lot of people they're talking about .... I would prefer we don't use as retribution canceled $110 billion worth of work," he told reporters after a roundtable at Luke Air Force Base in Arizona.

Trump said he would withhold a fuller comment until he speaks with Crown Prince Mohammed bin Salman.

Saudi Arabia has been under intense pressure since Khashoggi's disappearance.

Turkish officials, mostly speaking privately, have released a steady stream of gory details about what happened to the journalist at the consulate. They said he was killed soon after he entered the embassy, and his body dismembered.

None of the Saudi statements give any clue as to what happened to Khashoggi's remains.

As many as 20 people who work at the Saudi Arabian consulate, including a driver, technician, accountant, and concierge personnel have given statements to Turkish investigators in their probe of Khashoggi's death, according to semi-official Turkish media outlet Anadolu.

US officials have told CNN that the operation could not have been carried out without the knowledge of Prince bin Salman, Saudi Arabia's de facto ruler.