Minister of Energy, Water Resources and Irrigation Barsha Man Pun said that the recent amendment of Electricity Regulation by India opens the vast export market to Nepal’s electricity. Reacting to the recent decision of Indian power ministry, Minister Pun said that the amendment will also open door for foreign investors in Nepal in energy sector.

“The amendment ensures the market for Nepalese hydroelectiricty in India and Bangladesh,”said Minister Pun.”I hope after this amendment India will import our 10-15 thousand electricity.”

India has amended its cross-border power trading regulation paving the way for Nepali power producers to export electricity not only to India but also other third countries like Bangladesh, Bhutan and Myanmar.

India’s Ministry of Power has issued a new Guideline for Import/Export (Cross Border) Of Electricity 2018.

The Central Electricity Regulatory Commission of India under Ministry of Power had introduced the electricity regulation based on ‘Guidelines on Cross-Border Trade of Electricity’ for Nepal, Bangladesh, Bhutan and Myanmar seeking INR 10 million per megawatt as bank guarantee to utilise India’s transmission network in December 2016.

Indian authorities have rescinded the provision, which stated that only companies fully owned by the governments of the concerned countries or those having at least 51 per cent equity investment of Indian public or private companies could export power to the Indian market after obtaining one-time approval from the designated authority in India.

Likewise, the guidelines had a provision that only those hydropower projects with capacity to generate 50 megawatts and above would be granted grid connectivity to export electricity to the Indian market. This provision has also been excluded. The older provision apparently discouraged foreign investors and private Nepali power developers from exporting power to India.

As per the revised regulation, India has also dropped electricity from its list of strategic goods. With this revision, the Indian government has made it possible now for Nepali power developers to utilise India’s transmission network to export energy to third countries.

The Himalayan Times Reports that Nepal’s private hydropower developers also welcomed the new regulation. “It was the result of our continuous lobbying, negotiations and also pressure from neighboring countries for access to the power market of the South Asian giant,” said Shailendra Guragain, president of Independent Power Producers’ Association, Nepal.

The revised regulation on import/export of electricity states that after tripartite agreements between Nepal, Bhutan, Bangladesh and India cross-border trade of electricity across India will be allowed under the overall framework of bilateral agreements signed between respective countries.

According to The Himalayan Times, the new modification in the Indian regulation makes it easier for hydropower projects owned by Nepali private sector or China-backed companies to export electricity to third countries. 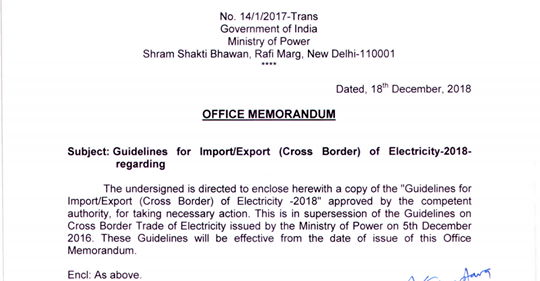 the "Guidelines for Import/Export (Cross Border) of Electricity-2018".

1.2 Notwithstanding anything done or any action taken or purported to have been done or taken for import/ export of electricity with neighbouring country(ies) shall be deemed to have been done or taken under provisions of these guidelines (Guidelines for Import/ Export (Cross Border) of Electricity- 2018) and shall continue to be in place till the expiry of the existing contracts. The Guidelines on Cross Border Trade of Electricity issued in 2016 shall stand repealed after the issuance of “Guidelines on Import/ Export (Cross Border) of Electricity- 2018”.

2.1 The objectives of these Guidelines are to:

Provided that in case of tripartite agreements, the cross border trade of electricity across India shall be allowed under the overall framework of bilateral agreements signed between Government of India and the Government of respective neighbouring country(ies) of the participating Entity(ies).

Explanation: “Entity” means a company/ authority/ Board/ autonomous body/ Body Corporate/ juridical person (of India or of neighbouring country) which proposes to participate in cross border trade of electricity.

4.2 Ministry of Power, Government of India shall appoint a Designated Authority for facilitating the process of approval and laying down the procedure for import/ export of electricity.

4.3 The Designated Authority shall coordinate with the respective authority of the neighbouring country for all purposes as stated in the Guidelines which, inter alia, include:

4.3.1 planning, monitoring and commissioning of transmission lines for import/

export of electricity 4.3.2 the grid security, safety and operation; 4.3.3 any other function as assigned by the Ministry of Power, Government of

4.4 Any Entity proposing to Import or Export electricity may do so only after taking

approval of the Designated Authority.

4.5 Approval of the Designated Authority will, however, not be necessary where the import/ export is taking place under the Inter Government Agreement signed by India and neighbouring country for specific project(s).

4.6 Considering the fact that import/ export of electricity involves issues of international relations; the Designated Authority will grant approval or otherwise only after taking concurrence of Govt. of India.

(a) Indian entities may import electricity from the generation projects located in neighbouring country(ies) directly or through Government or a Government Company or a licensed trader of that country after taking approval of the Designated Authority as laid down in para 4.4 of the Guidelines; provided that the generation project(s) has the permission to export power to India from the respective Government of the neighbouring country.

(b) In case of import through bilateral agreement between two countries, the

Government of India may designate an Entity for import of power.

(a) Generating Companies/ Distribution Companies of India may export electricity generated by coal or renewable energy or hydropower, to Entities of neighbouring country(ies) directly or through trading licensee(s) of India, after taking approval of the Designated Authority.

However, in case of electricity generated from coal based generating plants, export of electricity from India by a generating company/ distribution licensee directly or through trading licensee shall be allowed only where such electricity is generated utilizing imported coal or spot e-auction coal or coal obtained from commercial mining.

(b) In case of export through bilateral agreement between two countries,

the Government of India may designate an Entity for export of power.

5.3 Any Indian power trader may, after obtaining approval from the Designated Authority, trade in Indian Power Exchanges on behalf of any Entity of neighbouring country, for specified quantum as provided in the Approval and complying with CERC Regulations.

6.0 FACTORS TO BE CONSIDERED BY THE DESIGNATED AUTHORITY FOR

6.1 The Designated Authority shall grant approval for export/ import of electricity only after taking into account the generation capacity (as available) and the demand. Imports may normally be permitted only when the demand exceeds generation capacity (as available) in the country; and Exports may normally be permitted in case of capacity being in excess of the domestic demand. However, Govt. of India

reserves the right to import/ export electricity from/ to neighbouring countries for reason of larger policy interests.

7.1 The tariff for import of electricity excluding the quantum traded through Indian

Power Exchanges shall be determined in the following manner:

7.1.1 The tariff for import of electricity by the Indian Entity(ies) as per sub-clause 5.1 shall be determined, through a process of competitive bidding as per the Tariff Policy of India or through mutual agreement.

Provided that in case of hydro projects, the tariff may be determined by CERC as per its Regulations, if approached by the generator through the Government of the neighbouring country and agreed by the Indian entities.

7.1.2 Notwithstanding anything contained in sub-clause 7.1.1 where the tariff for import of electricity is mutually agreed by the Government of India and the Government of neighbouring country, involving the participating entities of the two countries, the same shall be final.

Provided also that the determination of Tariff after the expiry of the agreement, if not extended further, may be determined under either of the provisions prescribed under clause 7.1.

7.2 The tariff for export of electricity through cross border trade shall be determined

in the following manner:

7.2.1 Tariff for export of electricity as per sub-clause 5.2 through long term/ medium term/ short term agreements may be as mutually agreed or based on competitive bidding, subject to payment of the charges as applicable for transmission/ wheeling of electricity through the Indian grid.

7.2.2 Notwithstanding anything contained in sub-clause 7.2.1 where the tariff for export of electricity through cross border trade is mutually agreed by the Government of India and the Government of neighbouring country, the same shall be final.

Provided also that the determination of Tariff for export of electricity after the expiry of the agreement, if not extended further, may be determined under either of the provisions prescribed under clause 7.2.

8.1 Transmission systems developed within Indian grid, for import/ export of electricity between India and the neighbouring country would normally be part of the integrated transmission system of India.

8.2 The transmission interconnection between India and its neighbouring country shall be planned jointly by transmission planning agencies of the respective Governments based on the need for electricity trade in foreseeable future and sharing of information required for analysis and studies for such planning.

Explanation: “Pooling Station” is the sub-station which shall be monitored by

the system operator of the respective country.

8.4 The interconnection between two pooling substations of different countries shall be monitored and controlled by the respective system operators of the two countries, with proper coordination.

8.5 Transmission Access priority for import/ export of electricity in India shall be

determined as per the CERC Regulations.

8.7 The transmission charges, scheduling, metering, accounting, deviation settlement, secure grid operations involving the Indian Grid and any other related operational mechanism shall be governed in accordance with the applicable Regulations of the Government of India.

8.8 Ministry of Power shall notify Nodal Agency for each neighbouring country which shall be responsible for settlement of grid operation related charges as per CERC regulations.

8.9 Indian Generating Stations supplying electricity exclusively to neighbouring country may be allowed to build dedicated transmission line for connecting to the transmission system of neighbouring country keeping technical and strategic considerations in view and with the approval of the Designated Authority at the cost inbuilt in the contract agreement signed between Entity(ies) of India and the neighbouring countries. Such approval will be under applicable section(s) of the Electricity Act, 2003, subject to complying the technical and safety standards notified under various sections of the said Act.

9.1 Disputes within Indian Territory shall be settled as per the provisions of the

9.2 Disputes involving Entities of separate countries may be mutually agreed by the participating Entities or settled through the International Arbitration Centre as mutually acceptable.