Bimal Acharya, a young and dynamic Mayor of Mechinagar Municipality of Jhapa District, is committed to bringing transformation in his area, which has been restructured recently with several Village Development Committees of the past falling under his jurisdiction. Mayor Acharya, a young leader of Nepali Congress, spoke to New Spotlight on various issues related to the local governance. Excerpts: 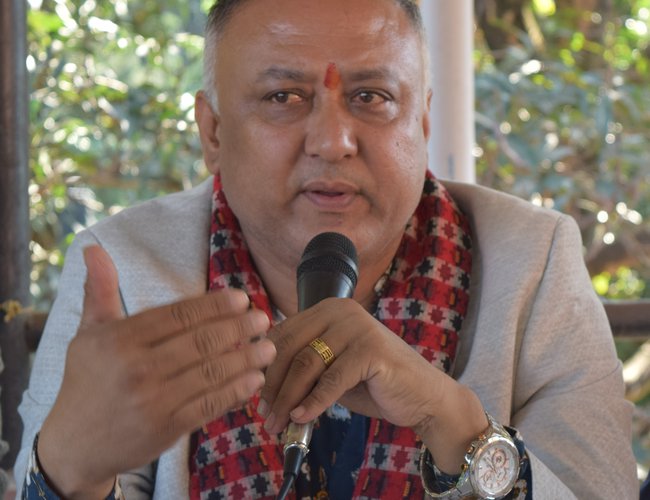 How do you see the role of mayor in the context of federal Nepal?

Our constitution has clearly spelled out the roles and responsibilities of mayors, chief ministers and the center. As per the constitution, municipalities have certain autonomous powers, executive, judicial and legislative. As a mayor, I head the municipal executive and legislature, and the deputy mayor heads the judiciary. In the present context, the role of mayor is very important to carry out the development activities and ensure service delivery to the people. From making recommendation for citizenship certificate, passport to property evaluation, the municipality is given all powers. Municipality has also the authority to decide the criteria for building construction and so on. As a head of the body, mayor shares a lot of roles and responsibilities, being accountable to the people.

If the municipality has such enormous powers to decide on the local matters independently, what is the role of the provincial government?

Since the local levels are given so much power, don’t you think there is the possibility of conflict between local and province levels in acquiring resources?

If all of us work under the guidelines of constitution and law, we can avert all kinds of conflicts and disputes. The relations of the center, province and local levels will depend on how they act. If they respect one another’s existence, we can avert chances of conflict. If province start to work as center, it will be unacceptable to the local levels, including municipalities.

Reports are appearing that say the conflict between mayors and deputy mayors is growing in different rural and municipalities. How do you look at this?

I don’t want to comment on other cases. So far as my own municipality is concerned, my municipality has a woman as the deputy mayor. She represents Nepal Communist Party (NCP) and I represent Nepali Congress. However, we are able to work in a harmonious environment. Since both of us are elected to serve the people and to improve the state of the municipality, there is no point to indulge in a personal feud.

With the growing frustrations in the party, how do you see the future of Nepali Congress?

Having such a long history of struggle to restore democracy, Nepali Congress will continue to play an important role in preserving liberal democracy in Nepal. Of course, our party is now in the opposition, it does not mean that our future is doomed. Our party will thrive again.

How do you see your first one year of tenure as the municipal mayor?

We started from the scratch. The local level was constituted after almost 20 years of vacuum, when there were no elected representatives. It took almost six to seven months for us to reorganize the institution. Under the restructuring, many new areas are included in the municipality. It took me almost six months to understand the problems and challenges of the municipality.

What is the state now?

Now, we know the needs of the people living in different areas within our municipality. We have been holding frequent interactions with the people to know the gaps and lapses in our program. As a local level institution, we are giving top priority for improvement of service delivery and improvement of infrastructure like roads, drinking water, sewerage, irrigation facilities and electrification.

How do you look at Mechinagar Municipality?

Our municipality is a gateway to India and Bangladesh. As our municipality shares border with West Bengal State of India, trucks and goods carriers use our border to pass to Bangladesh through Phulbarai road of India. I am very proud to say that Kakarvitta Customs Office, which generates the fourth highest revenue to the country, lies in the municipality. Mechinagar Municipality has the highest number of population among all municipalities.

Mechinagar is a municipality in Jhapa District, Mechi zone, Nepal and is the main entry point from India on Nepal’s eastern border. Nepal’s customs office is in Kakarvitta, a section of the municipality.

Mechinagar municipality was created in 1998(2053 BS) by combining Kakarvitta and Dhulabari VDCs. It is also known as Gateway of Eastern Nepal. The municipality is also the Eastern Nepal's major Industrial and Commercial Center. The total coverage area of the Municipality is 192 Sq.Km. and is 100 meter above the water level. According to the Census of 2068, the total population of Mechinagar Municipality is 57545 with 29957 Female and 27588 Male members. Having total housing units of 13181, its main commercial center are Dhulabari, Ittabhatta and Kakarvitta.

What is your annual budget?

Our proposed annual budget is over Rs. 1.01 billion for this year. The Municipality has also over Rs. 860 million allocated under capital development and the remaining for the regular budget. We are expecting to generate Rs.59 million from internal revenues. We are expecting to receive Rs.929 million as annual grant from center and provinces.

Why do you need such a huge grant?

Since many old Village Development Committees were merged in our municipality, they require a huge amount of money to construct the basis of urban infrastructure like road, drinking water and sewerage. We are spending all bulk of money to build these basic infrastructure. Similarly, as the municipality has also to distribute salary to the teachers, there is also an increase in the general expenditure.

How are the possibilities to generate internal resources?

We propose to collect over Rs. 60 billion from internal revenues. We have very limited areas to impose the taxes. After the completion of building infrastructure, municipality will start to generate the revenue on its own. We are exploring many new areas besides the traditional revenue areas like transport, agriculture product and service charges.

What do you need urgently?

The urgent need is road, sewerage, drinking water and landfill sites. As the city is growing, the volume of wastes is increasing. Similarly, lack of sewerage is also creating many problems. Most of the roads are earthen; there is the need to improve the road conditions. Despite declaring many areas as part of the municipality, large numbers of people don’t have drinking water facilities. Thanks to the support by Asian Development Bank under Second Small Towns Water Supply and Sanitation Sector Project, a few wards including Kakarvitta are able to receive drinking water. ADB supported infrastructure has helped improve the distribution and generation capacity as well.

Japanese People Have A Special Sense Of Intimacy Toward Nepal: Ambassador Yutaka Kikuta By Agencies 5 months, 2 weeks ago

Tokyo Olympic Committee Is Now Preparing For The Coming Summer By Keshab Poudel 6 months, 2 weeks ago

“Nepal Is A Crown Jewel For Humans Because Of Its Geographic Treasure” Professor Tomohiko TANIGUCHI By Keshab Poudel 6 months, 3 weeks ago