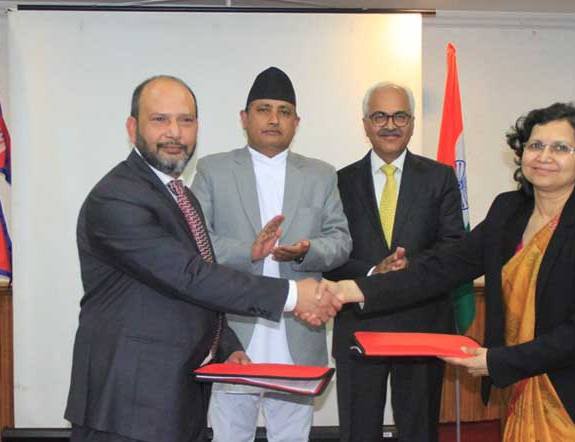 Nepal and India agree to set of institution for energy banking. Both the countries agree to set up an institution during the sixth secretary level Joint Steering Committee (JSTC) meeting held in Pokhara.

“Now the road to energy banking has opened,” said secretary Ghimire. This is a major achievement for us as it will address our concern to sale energy as part the cost of energy.”

After this approval, the energy banking will start from Dhalkebar-Mujffarpur 400 kV Cross Border Transmission line. Nepal Electricity Authority has already signed PPA with the projects with capacity of 2500 MW run of the river and 2500 MW Picking Projects.

After the completion of these projects, almost 2500 MW energy generated by picking projects will go waste. However, this agreement saves NEA Rs.84 billion rupees. The meeting also agreed to install 50 MVA transfer in Tanakpur and India will provide additional 80 MW power. This will solve the power crisis of far-western province. Currently, Nepal is importing 30 to 35 MW energy from India through Tanakpur.

India also agreed to support Nepal to enhance the capacity of 132 kV Raxaul-Parwanipur and Kataiya Kusaha Transmission line to end the electricity fluctuations in the region. Currently, Nepal is importing 50 MW each from both the transmission line.

As per the demand of Nepal, India agrees to construct 132 kV Kohalpur Nanpara Transmission line on India’s grant. However, both the countries agree to further discussion on New Butwal Gorakhpur 400 kV cross border Transmission line.

Ethiopian Renaissance Dam Controversy: Egypt And Sudan For More Negotiations On Flow of Water In Nile By Agencies 3 weeks ago

Bhutan Looks At Renewable Energy To Meet The Demands In Winter By NEW SPOTLIGHT ONLINE 3 weeks, 4 days ago