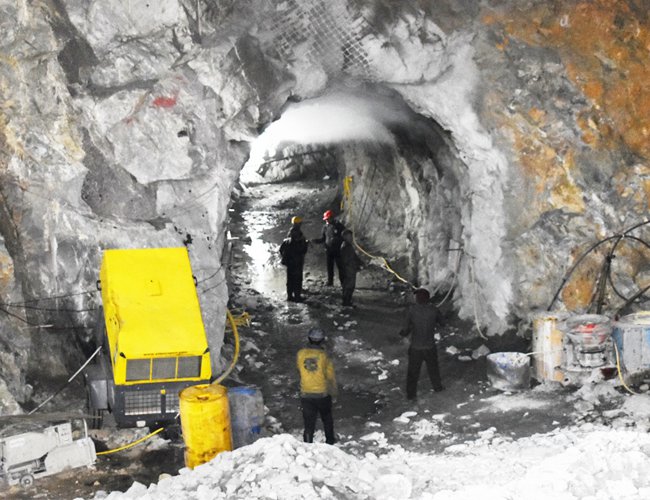 The tunnel of Nilgiri Second Cascade Hydroelectricity Project under construction in Narchyang of Annapurna Rural Municipality-4 of Myagdi district has achieved a breakthrough.

According to the project, the breakthrough of the 4275 meters tunnel is made.

With this, the 71-Megawatt project has achieved 75 percent progress of the overall construction. Nilgiri Khola Hydropower Company started the construction of the 38 MW Nilgiri First and 71 MW Nilgiri II projects simultaneously near the Annapurna Base Camp three years ago.

The project started building the tunnel in 2019 at the side of the Dobhan Power House and Chotepa dam in Narchyang.

The residential Engineer of the project, Ratna Bamjan Tamang, said that since the tunnels were dug simultaneously after five audits, they were able to finish the tunnel on time.

Finishing work has also been expedited with the connection of the tunnel. "We have speeded up the construction of the dam and powerhouse, as well as the electromechanical work. Both the projects will be completed in a year now," said Tamang.

He said that the construction of the tunnel of Nilgiri First Hydroelectricity Project has been accelerated with the aim of completing it before Dashain, October this year. About 90 percent of the construction at the dam site of the project has also been completed. Likewise, 80 percent of the civil work of the powerhouse has been completed, said another Engineer, Yogesh Subedi.

He said that the structure is being constructed to flow the water from the Nilgiri First to the tunnel of Nilgiri Cascade through a dam.

These two projects are located in remote areas of Narchyang. A road has been constructed to reach the construction site of the project by digging a difficult mountain area. It was very challenging to complete the project because of the complex geographical situation.

Tamang said, "Building the project at the foot of the Himalayas was a big challenge for us, but we have managed to reach the final stage of the project dealing with all the challenges."

Both the projects, with an estimated cost of Rs. 14 billion, are 'run-of-the-river' hydroelectricity projects. The electricity generated from Nilgiri Khola will be connected to the central grid from the 220 VK Dana Substation.

According to the project, a 7.4 KM transmission line of 220 kV capacity is being constructed to connect Dana Substation via Chotepa and Dobilla.

PPA Will Not Be Signed Without Market Study: Minister Bhusal By NEW SPOTLIGHT ONLINE 1 year, 4 months ago