ARUN III Getting Ready To Go

Despite facing several local level obstructions, Arun III Project, the largest hydropower project with Indian investment, is going to be completed by April 2023 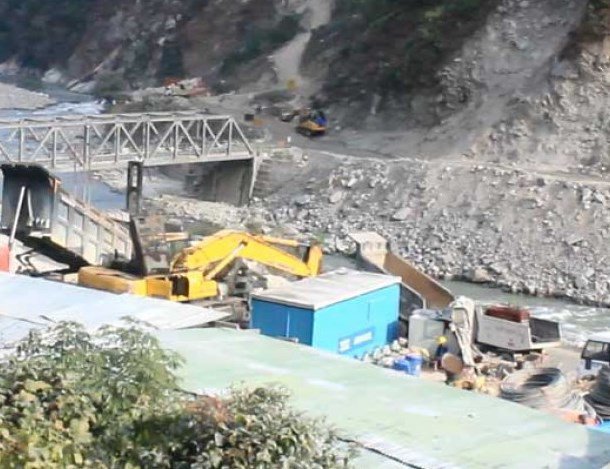 People who have lost land to the entrance built for the Arun III Hydroelectricity Project have obstructed work on its power house being constructed at Pukhuwa, Chichila Rural Municipality–3.

According to Jani Kumar Rai, chairman of the Arun III Compensation Victims Struggle Committee, 400 families lost 524 ropanis of land due to the construction of the entrance way. “We have repeatedly asked to be compensated for the land lost but our calls have fallen on deaf ears,” a disgruntled Rai said. “That is why we have been forced to stop work on the power house.”

Local Harka Singh Rai told The Rising Nepal that the victims would not allow the resumption of work until they were compensated. Some who have already received compensation for the land also claim that they only received a portion of the promised amount.

Passing through several such local level obstructions, Nepal's largest hydro power project Arun-3 is expected to be ready in April 2023. The electricity will be supplied in India.

Sutlej Jal Vidyut Nigam (SJVN), a joint venture between Himachal Pradesh and the central government, is building the 900 MW Arun-3 Hydro Power Project in neighboring Nepal. Due to the hard work, efficiency and dedication of the officers and employees of SJVN, this project under construction on the Arun river of Nepal will be ready in April 2023, two years ahead of the target. The central government had given a target to prepare this project in the year 2025. SJVN is moving towards early completion of this project and power generation from the project will start in April 2023. The project will generate 4,018.87 million units of electricity in a year.

Arun-3 is under construction in Sankhuwaswa district in the east of Nepal. It is situated on the Arun River. Its headquarter is located at Khandbari-9 Tumlingtar, 500 km from Kathmandu. In this hydro project, a 70 m high gravity dam and an underground power house with a head race tunnel of about 11.8 km are being constructed on the left bank of the river. Each of the 4 units of the project will generate 225 MW of electricity. The construction work of the project is going on in full swing. Electricity from this project will be delivered to Bihar, India through 400 kV double circuit transmission line. This hydro project will strengthen the economic connectivity between Nepal and India.

More than two thousand people are working at the construction site of the project, of whom 1700 are technicians and Nepalese workers. In May 2018, Indian Prime Minister Narendra Modi and Nepal's Prime Minister KP Sharma Oli had laid the foundation stone of this 900 MW power plant of strategic importance. The cost of this strategic project being built in Nepal has been estimated to be around Rs 7000 crore. With the completion of the project before the stipulated period, the corporation will get an opportunity to sell additional power for two years.

Nandlal Sharma, Managing Director and President of SJVN said that SJVN has won this biggest project Arun-3 of Nepal by beating foreign companies in the international bidding competition. The project is being constructed by Arun-3 Power Development Company Limited (SAPDC), a wholly owned subsidiary of SJPN. He said that if this project is completed two years before the target, SJVN will get double benefit. This will also reduce the cost of construction of the project. This is a prestigious project for Nepal as well as India and will bring peoples of the two countries closer. Nandlal Sharma appreciated the efforts of the team led by SAPDC CEO Arun Dhiman.

Arun Dhiman, CEO of Nepal-based SAPDC, said that under the guidance of Chairman Nandlal Sharma, this project is being implemented amidst tough challenges in the extreme geological situation. The project work is in the final stages and is scheduled to be commissioned in the year 2023. He said that every employee of the company is playing his role with utmost sincerity to complete the project in stipulated time. The successful commissioning of the project will play a vital role in bringing in more FDI in the hydropower sector in Nepal.

Rakesh Sehgal, chief GM civil designer of SJVN's SAPDC company, which is building the Arun-3 project in Nepal, says that 300 crores are being spent to bring additional machines and laborers to the under-construction companies to expedite the work of the project. He said that after spending this amount, the corporation can get a chance to earn more income of Rs. 2 thousand crores. The project is expected to generate an income of 1000 crores in a year. In such a situation, the income of two years can reach up to Rs 2 thousand crores.

Jitendra Yadav, Chief Finance Officer of SAPDC Company, said that according to the agreement, it is to be built in 2025. It will be run by the corporation till 2050 and later it is to be handed over to the Government of Nepal. Even if the corporation prepares this project earlier, the corporation will run it till 2050. The earlier it is built, the more time the corporation will have the opportunity to generate electricity. It should be ready and commissioned in 2023. Vigorous preparations are going on for this. In this, when the power generation starts, the central government will also get the benefit in the form of dividend soon.

The project is very important from ‘a strategic point of view’ as well.

Built at a distance from Nepal's border with China, it is also considered very important from a strategic point of view. This project is the largest investment of any country in Nepal so far. Looking at the geographical point of view here, it was a challenge to build the project itself and deliver the machines here.

Arun-3 project was the target of anarchists

This project, which is considered very important for Nepal, has been the target of chaotic elements. When SJVN took up the project in the year 2018, there were several attempts by anti-social elements to create many barriers at the project site. In February 2019, a series of bomb blasts took place near the project's power station, in which the generator and the tunnel boomer were damaged. In the year 2018, there was an IED blast here. Then the boundary wall of the project office was destroyed. However, there was no casualty in these bomb blasts. After these incidents, the Nepal government tightened the security of this project.

Whatever the situation it faces, SJVN has been making all its efforts to complete the largest project invested by India in Nepal by April 2023. Once the Arun III starts generation of electricity, Nepal will also receive around 100 MW of electricity free of charge.

PPA Will Not Be Signed Without Market Study: Minister Bhusal By NEW SPOTLIGHT ONLINE 1 year, 4 months ago