Facts about Our Economy

Our Prime Minister would do well by stopping himself and his colleagues from painting a rosy picture of the economy at a time when trade imbalance is on the rise, balance of payment is negative, current account is in deficit, foreign exchange reserve is decreasing and foreign investment has registered a sharp decline. Opposition leaders should also not be too hard on Oli because the mess that the economy is in today cannot be solely blamed on the still- young government led by him 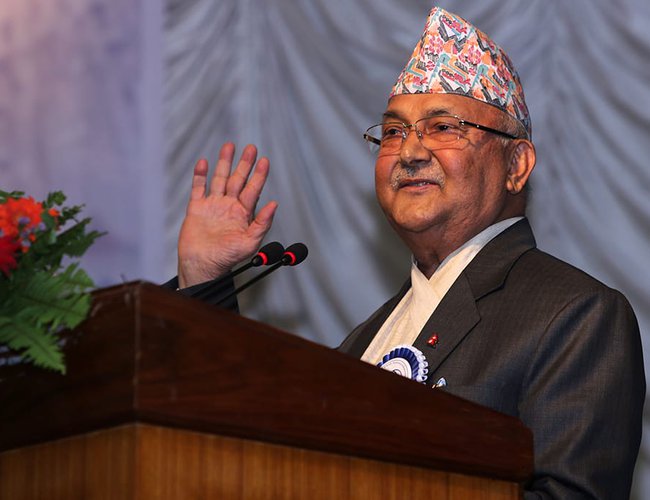 Prime Minister Olli’s recent address in the House attracted lots of attention of people who disagreed mainly with the part of his speech that contained information for him to boast about the progress on the economic front achieved during the last ten months or so of his governance. Probably buoyed by the record harvest of paddy this year, which increased by 8.89 percent, and the information that the economy would grow by more than 6 percent this fiscal year, he completely ignored the grave problems confronting the economy, surprising as well as offending many leaders from the opposition and independent observers. However, our head of government need not be too much criticized because in addition to the expected commendable growth of more than 6 percent, which should be credited to the record paddy production, there are some other positive developments such as the encouraging increase in the number of tourist arrival, mainly from India and China.A total of 200438 Indian and 153602 Chinese tourists visited Nepal in 2018, registering an increase of 25.1 percent and 46.1 percent, respectively. In 2017,160268 Indians and 104,664 Chinese had visited Nepal. It is interesting to see hundreds of Indians, mostly from rural areas of UP and Bihar states, queuing up in the Pashupatinath premises to pay their respect to the Lord of Hindus all over the world. Notwithstanding some of these positive developments, Oli should not be unhappy with his critics who probably raised voice in the House and outside against his observations because they are aware of the ailing state of our economy.

After the formation of this powerful government, business community had expected a better investment climate so that both domestic and foreign investment could be attracted. Unfortunately, however, government has failed to win the trust of investors, which has led to a decline in investment. Indeed, how can anyone in the current dispensation stop observers, both political and apolitical, from pointing that foreign investment in the country has decreased by more than half in the first few months of this fiscal year, compared to the corresponding period of last fiscal year. Business community often accuses this government of failing to create a conducive investment environment.

Nepal’s trade deficit has widened alarmingly over time as is shown by available data. In the last four months of this fiscal year, merchandise trade deficit increased by 37.08 percent to reach Rs. 454.48 billion and export\import ratio dropped to 6.1 percent from 7.4 percent in the corresponding period of last fiscal year. Nepal’s trade deficit further widened to Rs. 569.50 billion in the first five months, pushing the import\export ratio to 16.2: 1, which means Nepal spent Rs. 16.2 on import for every rupee of export earnings. Drop in the share of exports is not a recent phenomenon because little more than a decade ago, people got concerned that the share of export in total trade dropped to 13 percent, which has deteriorated to the current very disappointing level. Export\import ratio has declined to 6.2 percent in the five months of this fiscal year, from 7.5 percent in the five months of the last fiscal year. The ratio in the five months of 2016\17 stood at 8 percent. Oli- led dispensation, however, cannot be solely blamed for this unchecked deterioration over time in the external sector of the economy but any attempt by the concerned to veil the reality are bound to be strongly resisted as has been the case after Oli’s address in the House. This trade imbalance has caused Balance of Payment (BOP) to remain negative (Rs. 85.32 billion) in these months of this fiscal year, despite robust growth(31.9 percent) in the workers’remittances in the current five months as against its decline of 0.8 percent in the corresponding period of last fiscal year. The current account deficit in the five months of this year has reached Rs. 119.33 billion as against Rs. 64.11 billion deficit in the corresponding period of last fiscal year. Moreover, government’s inability to spend the allocated expenditures is also often cited as an example of ineffective governance. It may be noted that in the six months of this fiscal year total budgetary expenditure (recurrent, capital and fiscal management combined) has reached only 28.57 percent of the total budgetary outlay of Rs. 1315 billion and the state of capital expenditure has remained pathetic at 17.68 percent, which has resulted in Rs. 152 billion of government’s money lying idle at the central bank. Ministry of finance people may boast that in the six months of this fiscal year, revenue collection has gone up by 25.5 percent, compared to the corresponding period of last year but Nepali Congress leaders like Dr. Mahat may wish to take resort to some figures to communicate that revenue collection has fallen short of the target in the six months. Further, how can NC leader and parliamentarian Gagan Thapa be stopped from stating in the House and outside that revenue collection could meet only 93.5 percent of the target, which aims at registering an increase of 35 percent over the collection of last fiscal year. It may also be mentioned that revenue collection last fiscal year had fallen short of the target for the first time in a decade. In the meanwhile, there is no dearth of people who see not much sense in giving too much emphasis to revenue collection when about Rs. 152 billion of government money is lying idle at the central bank and cost of borrowing from financial institutions has gone up sharply on account of liquidity crunch that the market has been experiencing since long.It is also perplexing that the two government agencies-central bank and the comptroller general’s office- have come up with conflicting data on revenue collection, the difference seen being as high as Rs.100 billion. All said and done, it would be unwise to belittle the progress achieved on the revenue collection front, despite strong chances of it falling short of the ambitious target one more time. In keeping with the global trend, consumer price inflation has moderated both in Nepal and India. Drop in commodity and fuel prices have contributed towards drop in the level of inflation in many countries. The ongoing trade war between China and India and a relatively weak growth of Chinese economy in 2018 is likely to further complicate the situation globally. The recently held trade talk between China and USA in Bejing and the one to be held in Washington D.C soon is likely to find a solution because both sides, which have burnt their fingers indulging in this row, look anxious to end the crisis.

Those in government must have also realized that foreign exchange reserve with the central bank is also on a decline. For example, the gross foreign exchange reserve was Rs.1065.80 billion as at mid-December 2018, which decreased to Rs. 1102.59 billion as at mid-July, registering a decrease of 3.3 percent. Oli-led government is also accused of not being able to do anything about hundreds of millions of demonetized 1000 and 500 denomination Indian rupees still awaiting exchange. A recent cabinet decision banning circulation of Indian banknotes of all denominations above 100 surprised people, especially those not aware of the fact that the Reserve Bank of India (RBI) has not taken any step till date to formalize the use and circulation of the new Indian banknotes in Nepal through the Foreign Exchange Management Act (FEMA), which prompted our central bank recently to request the RBI that necessary arrangements be made to allow the use of new denomination Indian banknotes. Our monetary authority has also sought exchange facility for the demonetized notes. It is learnt that the central bank holds 700 million Indian rupees in 500 and 1000 rupee denominations. In addition to this, general public and business concerns could be possessing huge sum in demonetized notes. It may also be noted that only 100 rupee Indian banknotes have been covered by an earlier FEMA notification, which means foreign nationals including Nepalis are not allowed to carry other denomination notes. This has created problems for businesses relying on Indian tourists, people leaving in border areas and our central bank which has to bring in Indian currency to meet demand for it in Nepal. Hope the new initiative\urging of our central bank would succeed in getting favourable response of the RBI to clear the Indian banknote- related lock jam so that, in addition to immense benefit to the people, those in government would also have some kind of a concrete achievement to talk about in future discourses. The concerned at RBI may also note that positive action on this issue would increase the faith also of non-Indians in Indian currency the acceptability of which as a major currency is increasing not only in South Asian countries but elsewhere, too.In addition to these matters related to the economy, the current dispensation is also confronted with multitude of problems of varying nature and magnitude in other areas.

The eight-day long Mahasamiti meeting of Nepali Congress(NC),which endorsed a 15-point proposal on contemporary issues, accused the government of trying to undermine the role of the main opposition party in the name of two-thirds majority in the parliament and vowed to check the authoritarian ambition of the government. It also came down heavily on the government over a function allegedly organized to promote one particular religion by a controversial organization with active participation, support and protection of the government. The conspicuous presence and active participation of the top leaders of the ruling Communist Party including Prime Minister Oli, who also received a huge sum as cash reward, made many people unhappy and drew sharp criticism not only from the main opposition party NC but the ruling party some leaders of which have demanded that leaders like Oli and senior leader Nepal apologize publicly for the wrongdoing. NC and some prominent leaders of the ruling party have separately denounced such an activity and have warned the government not to repeat such things.It is interesting that while a few communist leaders have been accused by their own part men and others of working in favour of Christianity, NC leaders have begun to exert pressure on their leaders to support Hinduism as a national religion. Although the NC leadership succeeded in stopping the religion-related proposal from taking a formal shape in the Mahasamiti meeting, it would be very difficult to permanently put to rest this proposal moved by an overwhelming majority of Mahasamiti members of NC desperately in need of fresh slogans and agendas to stop further erosion in it.

This article has simply made an attempt to put facts on our economy before the concerned. Our Prime Minister would do well by stopping himself and his colleagues from painting a rosy picture of the economy at a time when trade imbalance is on the rise, balance of payment is negative, current account is in deficit, foreign exchange reserve is decreasing and foreign investment has registered a sharp decline. Opposition leaders should also not be too hard on Oli because the mess that the economy is in today cannot be solely blamed on the still- young government led by him.

Here’s How Governments Can Reduce The Impacts Of Asia’s Devastating Flash Floods By Rabindra P. Osti 3 days, 6 hours ago

Make In Nepal By Hemang Dixit 4 days, 15 hours ago