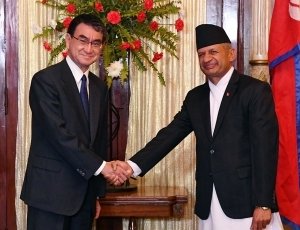 It is said that a friend in need is a friend indeed. This is what Japan has shown to Nepal again. At a time when Nepal's national flag carrier was facing the lack of routes to fly because of the reluctance of many countries to open permissions for it in view of European Union's black listing, Japan opened the route to Nepal Airlines Corporation to fly to the country.

Minister Kono stated that direct flights between the two countries would further strengthen bilateral exchanges, and expressed satisfaction to sign the exchange of notes regarding the amendment to the schedule to the Air Services Agreement with Minister Gyawali.

Minister Gyawali welcomed the move to reopen direct flights as a result of the amendment to the schedule to the Air Services Agreement, and showed his intention to hold discussions aimed at concluding a bilateral document for dispatching workers from Nepal to Japan.

Paying a visit in a month after the visit to Japan by Nepalese Foreign Minister Pradeep Gyawali, Japanese Foreign Affairs Minister Kono has showed how a friend can rescue another friend in need.

This is not the first time Japan has supported Nepal during a crisis. During the earthquake, Japan immediately sent a high-level rescue team to save Nepali people. Japan provided various kinds of support in recovery and reconstruction of schools, public buildings and local institutions.

Celebrating the establishment of 60 years of diplomatic relations just a year ago, Japan has been a partner contributing immensely to Nepal's modernization over the years. From road to agriculture, hydropower to irrigation and civil aviation to health sector, Japan has played an all important role in the modernization of Nepal.

Although Yoshiro Mor was the first Prime Minister of Japan to officially visit Nepal in August 2000, the recent high-level visit by the foreign minister after a long gap was very significant.

Minister Gyawali stated that this was the second meeting in two months between the two ministers. Minister Gyawali explained that Japan was an important partner of Nepal, and expressed deep gratitude for Japan's support.

Minister Kono noted that his visit to Nepal was the first by a Minister for Foreign Affairs of Japan in approximately seven years, and conveyed his intention to support the economic development of Nepal.

Minister Kono stated that Nepal was located between South Asia and China, and explained that Nepal's sustainable development was important for peace and stability of the region as a whole.

Minister Kono explained Japan's readiness to support the socioeconomic development of Nepal as a longtime friend, and to strengthen exchanges with Nepal. Minister Kono, also mentioning that Minister Gyawali visited Japanese agricultural facilities during his previous visit to Japan, expressed his hope for Japan's technologies in the field of agriculture to prove helpful for agricultural development in Nepal.

Minister Kono, hoping to pursue cooperation in the field of agriculture, explained that the Ministry of Agriculture, Forestry and Fisheries was to dispatch a research team from January 22 as the first step.

In addition, Minister Kono expressed the view that the relationship between the two countries was underpinned by people-to-people exchanges, and explained that Japan was scheduled to invite 12 young people from Nepal via the JENESYS (Japan-East Asia Network of Exchange for Students and Youths) Program. 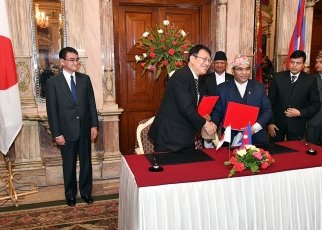 Minister Kono explained that Tamura City in Fukushima Prefecture, Komagane City in Nagano Prefecture and Kobe City were host towns for the 2020 Tokyo Olympic and Paralympic Games, and expressed hope that sports exchanges and inter-regional exchanges would move forward.

Minister Gyawali expressed gratitude for Japan's support for Nepal's development in the socioeconomic field, along with expressing hope that Japan would continue to support Nepal in graduating from least developed country (LDC) status in 2030.

Japanese Ambassador to Nepal Masamichi Saigo said the recent visit by the Minister for Foreign Affairs of Japan has further strengthened the existing friendly relations between Japan and Nepal.

"The visit by Japanese Foreign Minister Taro Kono to Nepal has added a new dimension to the age-old Japan-Nepal relations," said Director of the International Press Division of the Japanese Ministry of Foreign Affairs Natsuko Sakata.

Talking to editors of the Nepali media at a program in Kathmandu, Sakata, who is also part of the Japanese Foreign Minister’s delegation, said the visit also opened doors to exchange high-level visits in the future and expand relations at the people’s level.

She was of the view that the visit would give continuity to exchange of high-level visits and talks at the senior political level, which had not been able to take place for a long time. She said that the renewed air service agreement would also contribute to exchange of visits between Nepal and Japan.

Stating that Japan, as a friendly nation to Nepal, has been supporting the country’s socio-economic, cultural, educational and various other sectors since a long time, Sakata added that Japan wished to see a prosperous Nepal and would continue its cooperation in the days to come.

Inclusion of Nepal as a source country for labor with the recent change in the labor law of Japan will provide jobs for Nepali workers in Japan’s labor market. “The process to select workers under the new labor provision will begin from coming April in nine countries, including Nepal,” Sakata shared.

She also shared that the skills of workers will be listed for 14 sectors, including construction, industry, agriculture, fishery, hotel, service sector, food production, automobiles, among others.

Nepal Is Committed To Protect Human Rights Of The People: Foreign Minister Gyawali By NEW SPOTLIGHT ONLINE 6 hours, 41 minutes ago

President Bhandari And PM Oli Congratulate President Biden On Assumption Of The Office Of The United States By NEW SPOTLIGHT ONLINE 17 hours, 52 minutes ago