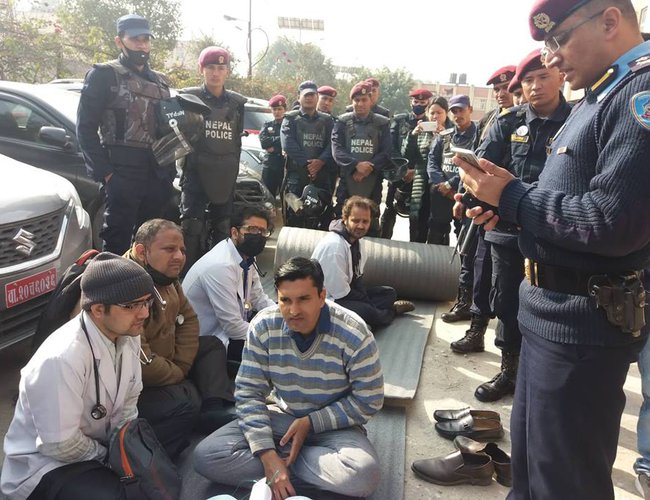 Despite the obstruction created by police, doctors of Tribhuwan University Teaching Hospital continue their relay hunger strikes in Dr. Govivnda K.C's support. Although Police removed the shits and other materials from the relay hunger strike venue, doctors stages at plain floor.

Doctors staged relay hunger strike throughout the country in a bid to exert pressure on the government to address the demands of Dr Govinda KC, who has been on hunger strike for the last 20 days.

Dr KC’s hunger strike has entered the 21th day but the government was reluctant to address his demands. “We will be forced to halt other health services to save Dr KC’s life if the government continues ignoring the demands of agitating doctors,” said Dr Shrestha.

Director of TUTH Prem Krishna Khadga said the hospital had requested all the doctors staging relay hunger strike to move from the hospital premises respecting the order of the Supreme Court.

Chinese Embassy Issues A Strong Protest Against An Article Published In English Daily By NEW SPOTLIGHT ONLINE 4 hours, 22 minutes ago