It appears that the mammoth Burhi-Gandaki High Dam Project is proposed to be implemented turning a blind eye to our country's legitimate share in the vast irrigation and flood control benefits accruing to India, which could even surpass power benefit, despite the fact that the previous BJP government of India had constituted a high level commission under then Minister Suresh Prabhu to recommend royalty to be paid by India to Nepal for regulated water discharged after power generation in our country. 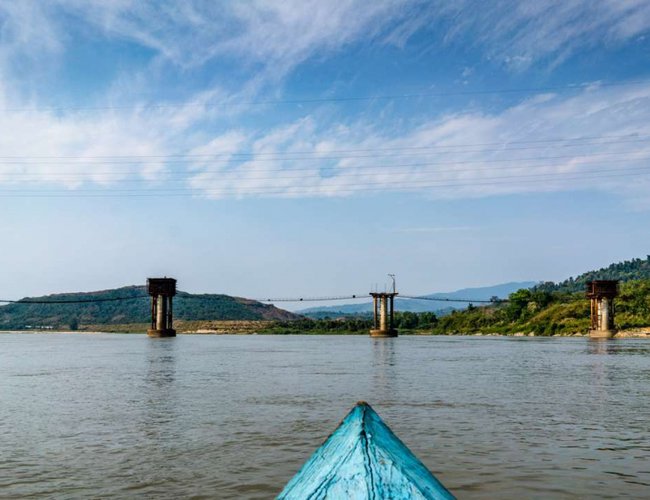 The construction of the Myitsone storage dam project located in Myanmar earmarked to generate 6,000 MW power began in 2009. The height of the Myitone dam is 140 meters. The project was being implemented by China Power Investment Corporation at a cost of US$ 3.6 billion. The opening date of completion of the project was 2017. However, Myanmar Government was forced to abandon the construction of the Myitsone dam project in 2011 under the pressure of the environmentalists, who were against the project.

The suspension of the Myitsone dam project that has `strained relation between China and Myanmar should serve as reminder to our planners and decision makers not to take hasty decision on implementation of large water resources projects without very through examination of all aspects of such projects.

Myitsone Dam Project and Burhi-Gandaki Dam Project are earmarked to be implemented by China. Both these dams are located in highly seismic zones. Compared to 140 metes high Myitsone Dam the implementation of 260 meters high Burhi-Gandaki double curvature arch dam designed by the French consulting firm in highly seismic region of our country is indeed a great challenge. It should be remembered that even the 60 meters high double curvature Maltpassé arch dam built in France collapsed in December 1959 accompanied with significant loss of life and property. Lack of adequate geological investigation is ` considered to be the cause of the dam failure.

Both Myitsone Dam Project and Burhi-Gandaki Dam Project are associated with submergence of vast area of agricultural lands.

Nepal is looking forward to implement in near future very ambitious 260 meters high Burhi-Gandaki double curvature arch dam hydropower project to resolve our energy supply problem instead of run-of-river type projects operating at high capacity factor, which could have been quickly implemented.

It appears that the mammoth Burhi-Gandaki High Dam Project is proposed to be implemented turning a blind eye to our country's legitimate share in the vast irrigation and flood control benefits accruing to India, which could even surpass power benefit, despite the fact that the previous BJP government of India had constituted a high level commission under then Minister Suresh Prabhu to recommend royalty to be paid by India to Nepal for regulated water discharged after power generation in our country.

The proposed Burhi-Gandaki double curvature arch dam will be in one of the most seismically active areas of the world. The dam site is very close to the epicenter of very recent Gorkha earthquake measured 7.9 in Richter scale. This type of dams are highly sensitive to earthquakes. Apart from it, the proposed Burhi-Gandaki dam is located in an area prone to big landslides, which frequently block the river resulting in impoundment of entire river flow. Needless to say that absolute certainty of suitability of geological condition is a prerequisite for selection of the proposed type of dam.

It is obvious that due to enormity of the volume of storage reservoir the scale of the collateral damages would be too big if this dam collapsed. Lack of through geological studies had resulted in failure of double curvature arch dam even in France itself. Similarly, the Vajont dam disaster in Italy reminds us that rigorous geological studies of reservoir area is equally very important.

Orville Dam disaster of the USA

Very recently in 2017 the news of Orville Dam disaster had been covered by media all over the world. The Oroville Dam is an earthfill embankment dam on the Feather River in the state California of the USA. This dam is 235 meters high. It is the tallest dam in the US. The storage capacity of the reservoir is 4.4 cubic kilometers. The dam serves mainly for water supply , hydroelectricity generation and flood control. It is interesting to note that this dam has provided flood control benefit exceeding US $ 1.3 billion between the years of 1987 and 1999.

The main spillway of the Orville Dam was damaged after heavy rains and an anticipated failure of the dam resulted in mandatory immediate mass evacuation of people numbering about 200,000 living in the river basin downstream the dam. All those people had to flee to safety at a very short notice leaving everything behind. Evacuation order was partially lifted only after four days. People wishing to come back to their homes were at their own risk allowed to return back only after the danger of dam failure had started to recede

It is reported in media that underestimation of the maximum flood discharge and lack of proper repair and maintenance of the dam is the cause of the dam disaster.

All of a sudden our country was shocked by the news that the Kulekhani high dam might be on the brink of collapse just few years after the completion of the project construction. Canadian Water Resources expert Dr. John Cooper had reported after his visit to the project site that deep cracks threatening to be extremely dangerous for the safety of the high dam have already developed over a large area just upstream dam around the intake structures. It was feared that a large mass of the right bank would slide and plunge into the reservoir triggering the giant waves overtopping the dam. It became obvious that the Kulekhani dam was in great danger if prompt action is not taken to complete the necessary engineering works in time before the onset of the coming monsoon season to prevent the dam failure. A similar type of rock sliding into the reservoir had resulted in 1963 Vaiont Dam disaster in Italy.

Mobilization on a War Footing

Implementation of extensive civil engineering works in a very short period based on the recommendation of a hastily constituted panel of top geotechnical experts from four different countries, viz the USA, Canada, Australia and Japan helped to prevent the disaster that could have resulted in many thousands of deaths apart from plunging the entire country into economic despair. How the Kulekhani dam was on the brink of collapse must serve as a lesson to our policy makers and planners.

Any one visiting the Kulekhani dam site can even now see the extensive works carried out to prevent the dam failure. The intake and its surroundings have been anchored by long cables to prevent them from sliding into the reservoir. Large areas have been cleared of loose overburdens. Special drainage tunnels have been provided to prevent the landslides.

A Panel of Experts

The Burhi-Gandaki project, which would be impounding a vast reservoir of about five cubic kilometers, would prove to be dreadful curse to our country if the dam collapsed. Thus it is absolutely necessary that our government should constitute a panel of internationally renowned experts to review rigorously all aspects of Burhi-Gandaki project dam design to ensure that it is safe to build the proposed dam before taking final decision to implement this technically ambitious high dam project.

We should not forget the fact that even then West German Government had also constituted a panel of renowned experts under a French professor, who was chairman of the World Federation of Engineering Geology, to review the design of our Kankai high dam carried out under their grant assistance by very experienced German experts although the height of the proposed dam was only about 80 meters.