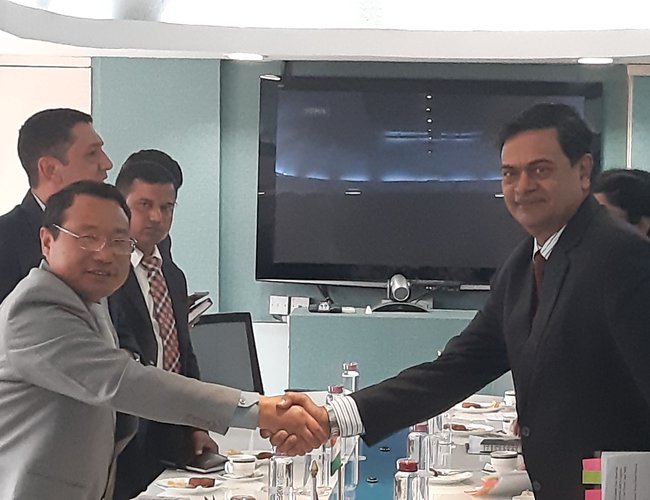 Minister of Energy, Water Resources and Irrigation Barsha Man Pun said that Nepal Government will provide complete security to the projects constructed under the investment of India. Assuring Indian concern on the security of Indian companies investment in Nepal in hydro power sector referring the recent explosion in Arun III project in Sankhuwasabha, minister Pun has said that the government take all necessary measures not to repeat such incidents in the future.

State Minister of Energy of India Raj Kumar Singh expressed security concern in Nepal for the projects under the investment of Indian companies. Referring the recent incidents of explosion in a site of Stalaj Jalbidhut Bikas (SJB) subsidiary company in Arun III, Minister Singh urged minister Pun to take all necessary measures to prevent such violent act against Indian companies.

Minister Pun has revealed that Indian minister Singh has proposed Nepal its interest to construct the project. Minister Pun said the decision whether to permit or not to Satlaj will be taken on after looking the progress performance in Arun III.

According to a press release issued by Ministry, Minister Pun has also proposed Indian minister to provide Nepal the benefits of storage and integrated and multiple hydro power development projects constructed in Nepal on the basis of benefits taken by lower riparian India. Minister Pun is currently in New Delhi to take part in international conference on Social Development Goals.

After Brazilian Brass Company failing to work as the conditions lays in the license, Ministry of Energy cancelled the license under a direction of Commission of Investigation of Abuse of Authority (CIAA).

The project license is now in the government basket. With estimated cost of Rs. 100 billion, the project will likely to generate 1000 MW if it will be designed aiming to export electricity to India.

Electricity Development Department is currently doing detailed study. Minister Pun has said that India proposed to construct the lower Arun on a same model like that of Arun III.

As per the Project Development Agreement (PDA) signed between Investment Board and the Company, the project was given under BOOT Model. Twenty-five years after the generation, the project will be handed over to Nepal. The construction period will be five years.

However, CIAA directed Ministry of Energy to cancel the license of Bras Power company on the condition that the company did not fulfill its conditions.

Lower Arun Project site is located in lower side of Arun III hydro power project, which is a picking project with capacity to produce energy 5-6 hours day during the dry session. Brass Power had proposed to construct Lower Arun with 650 MW. However, Ministry of Energy declined to upgrade the capacity.

Situated between Sankhuwasaba and Bhojpur district, there need to construct 15 kilometers tunnel to drop the water. According to study, the power house of the project will submerge in the water in case of construction of Kosi High Dam.