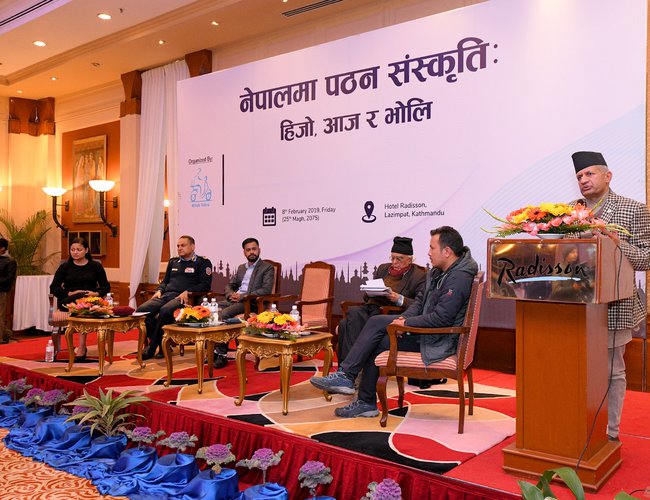 Kitab Yatra, an emerging online bookstore in Nepal, celebrated its first anniversary on Friday, 8 February 2019, organizing a seminar on the development of reading culture in Nepal. The event brought together established writers, journalists, corporate icons, diplomats, and budding entrepreneurs among others at a common platform to create a discussion for increasing the reading culture in Nepal.

Minister for Foreign Affairs, Pradeep Kumar Gyawali was the keynote speaker for the ceremony, who spoke at length on the development of reading culture in Nepal in recent times. Addressing the seminar, minister Gyawali said that along with the development in reading culture, we should also be aware of the kind of readers we are growing. “If the book publishing industry is entirely profit-centric, the readers will grow delusional and turn into consumers only. Developing a reading culture is developing readers with critical consciousness,” he said.

During the program, Inspector General of Police, Mr. Sarbendra Khanal, Prof. Dr. Abhi Subedi, novelist Buddhisagar, and actress Richa Sharma engaged in a panel discussion session about reading culture in Nepal. In the session, the speakers said that along with ease of access to books and increased awareness level in the society, the number of book readers is increasing in Nepal. The speakers were unanimous that diversity in readers’ interests has enriched Nepali literature in recent times.

IGP Khanal said that reading culture will be developed only if we start treating the readers and educated ones with respect. Khanal said that the libraries have been established in the police offices and the culture of reading is being promoted among the officials.

Similarly, acclaimed novelist Buddhisagar shared the struggles he went through in the rural part of Karnali region and how he got into writing. Speaking about the difference between then and now, he said, "These days, we even discuss new books launched in the market when we are meeting friends in cafes and coffee shops. This is a positive trend.” He said that the increased availability of books as per readers’ interest has increased the number of readers.

Actress Richa Sharma said that in the past, there was a thought that daughters will be spoiled if they read books outside of the school curriculum. “However, these days, parents encourage their daughters to read books,” she said. Sharma is of thought that an artist should read more and more to understand society, environment, and context. She also informed that she reads majority of books as soon as they are available in the market.

Prof. Dr. Abhi Subedi mentioned that there was a conflict between the book and cyber culture in recent times. He said, “Compared to past, reading culture by purchasing books has increased. However, with the increase in the attention of youth to the cyber world, there should be discourse on its possible impacts in the future.”

Likewise, Bhupendra Khadka, Chairman of Bookhill Publication, talked about the role of organizations like Kitab Yatra in the market promotion of books, and thanked for their contributions. Rishi Ram Adhikari, CEO of Kitab Yatra, thanked readers, writers, publication houses and supporters who helped Kitab Yatra to reach this height within one year of establishment.