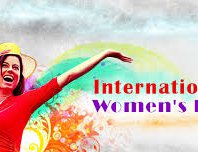 "I think women are foolish to pretend they are equal to men, they are far superior and always have been."

"I don't like the word "sacrifice" or "compromise". Anyone who is too into this sacrificing concept has very low self esteem because they want to be martyrs at the drop of the hat. No! Stand up for yourself!"

"Every man needs a woman when his life is a mess, because just like the game of chess - it's the queen that protects the king." - Unknown

"No country can ever truly flourish if it stifles the potential of its women and deprives itself of the contributions of half of its citizens." - Michelle Obama, Former First Lady of the United States

"Power's not given to you. You have to take it." -- Beyonce, Award-Winning Singer

"We realise the importance of our voice when we are silenced"

When you educate a woman, you set her free.

When women put their heads together, powerful things happen - Unknown

FAO’s Asia And the Pacific Nations To Hold Regional Conference In Virtual Mode In September By NEW SPOTLIGHT ONLINE 14 hours, 47 minutes ago