Ambassador Acharya Presents Letters Of Credence To President Of India

Ambassador Acharya Presents Letters Of Credence To President Of India 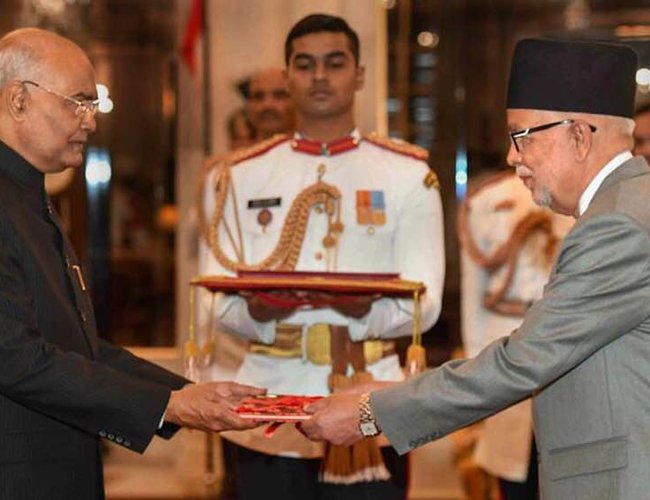 Nilamber Acharya presented to Ram NathKovind, President of Republic of India, the Letters of Credence accrediting him as Ambassador Extraordinary and Plenipotentiary of Nepal to India, at a special ceremony organized at Rashtrapati Bhavan, New Delhi.

During a meeting following the presentation of the credentials,His Excellency President of India welcomed and congratulated. Acharya as Ambassador of Nepal to India. He mentioned about age-old relationship between the two countries and the two peoples.

According to a press release issued b Embassy of Nepal New Delhi, ambassador Acharya expressed that he would make, during his tenure, his sincere efforts in promoting age-old, close and multidimensional ties subsisting between the two countriesfor the benefitsof the two peoples. Ambassador Acharya also expressed his happiness over the achievements made by India over the years and shared that Nepal, as a close neighbour of India, would benefit from India’s achievement in various fields. He mentioned that with the political stability in Nepal following the promulgation of the constitution and last year’s elections, Nepal would now focus on economic development and prosperity. Nepal’s motto is Sambriddha Nepal Sukhi Nepali (Prosperous Nepal Happy Nepali), Ambassador Acharya expressed.

Ambassador Acharya had arrived in New Delhi to assume his responsibility on February 18, 2019.