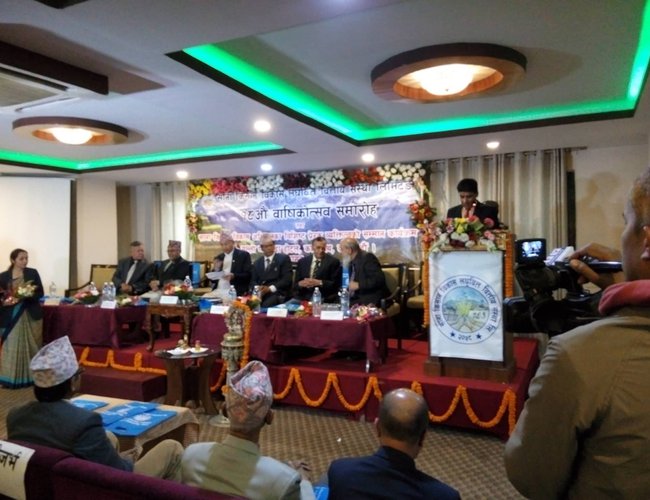 Although there were several other programs, one of the main highlight of the programs was felicitation of Sharma for his contribution to expand and strengthen the project. Felicitating Sharma, CEO Shivaram Prasad Koirala and his team in the bank have shown their commitment towards the cause of farmers. Sharma has spent entire his career to establish the cause of the downtrodden farmers.

Despite making a progress in alleviation of poverty through cooperatives and micro-finance, large numbers of Nepali people are still living below the poverty line. With lack of strong grassroots based financial institutions, large numbers of farmers are yet to improve their agriculture production.

As it celebrated the 18th anniversary in the presence of Finance Minister Dr. Yubraj Khatiwada, SKBBL, which has already invested Rs.75 billion, is now the largest micro-financial institution, serving 800,000 households in 69 districts.

"As the institution has already had the highest capital, it needs to increase its current D level financial status to B. There are many other similar micro-finance institutions required for upgradation. I want to express my commitment to upgrade this institution to B Level financial institution," said Dr. Khatiwada, who is one of the key architects of the SKBBL.

With 691 No. of SFACLs/MFIs members and 229 similar types of others, SKBBL reaches throughout the country among the poor farmers. Thanks to the support of Government of Israel and Embassy of Israel in Kathmandu, SKBBL has also sent almost 500 students of small farmers in Israel for 10 months in an ‘earn and learn’ program.

Living for centuries in subsistence farming, the exposure given in Israel has already helped transform Nepal's traditional based agriculture system.

"Despite opening of numbers of micro-credit related institutions, SKKBL is emerging as a financial institution supportive to farmers with minimum charges," said finance minister Dr. Khatiwada.

SKKBL is the extended form of Small Farmers Development Program Initiated by Agricultural Development Bank Limited (ADBL) to uplift the social and economic condition and lives of rural poor people in early 1980s. In its 18 years of establishment, SKKBL has continued to work for the people characterized by geographical diversity, traditional modes of farming, under employment, low income and poor living standard.

The SFDP was the first credit plus targeted program to provide microcredit for income generating activities alongside a saving program at the doorsteps of poor communities. The program has provided skill development trainings and socio-economic development programs to improve the living conditions of the rural poor. This community based integrated SFDP targeted for economic and social development was extended to remote and far flung villages.

"With the extensions of programs nationwide and institutions, we are able to reach the poorest and poor sections of people. One of our achievements is that the rate of loan recovery is 99 percent," said Shiva Ram Prasad Koirala, Chief Executive Officer. On the one hand increasing cost of agriculture production with lower quality, declining productivity, high risk and growing international competition is making it difficult for farmers resulting in the country's inability to produce the product for their own consultation," said Koirala.

Welcoming the guests, chairman of SKKBL Khem Bahadur Pathak said that there was the need to further expand SKKBL to reach the poor and vulnerable communities.