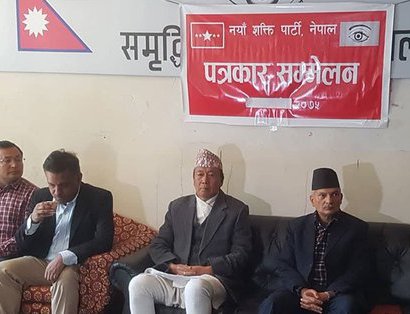 Former prime minister and Convener of Nayashakti Party Dr. Baburam Bhattarai have said that the move of the government to completely authorize Prime Minister to mobilize Army without consent of Security Council will turn prime minister authoritarian.

“Given the recent trends, what I can see that Prime Minister KP. Sharma Oli is aspired to be an authoritarian dictator. Oli is looking for constitutional coup, “said Bhattarai addressing the press meet in his party office.

Dr. Bhattarai said that the government has to deal Chad led Communist Party of Nepal politically. Of course, they are more deviated to extreme left with violence motivation, the government needs to be flexible to deal with them,” said Dr. Bhattarai.

Terming the decision of Kailali District Court’s decision to prison Resham Chaudhary and other 20 years, Dr. Bhattarai said that they should be given justice dealing their actions politically like all the other such events of past. He demanded release of Resham Chaudhary on the ground of politics. If CK Raut can be released, there is nothing justify to prison Chaudhary.

COVID-19: Number Of Children Living In Household Poverty To Soar By Up To 86 Million By End Of Year By NEW SPOTLIGHT ONLINE 23 hours, 22 minutes ago

Twelve Nepali Migrant Returnees Killed and 20 Injured In a Bus Accident In Banke By NEW SPOTLIGHT ONLINE 1 day, 9 hours ago