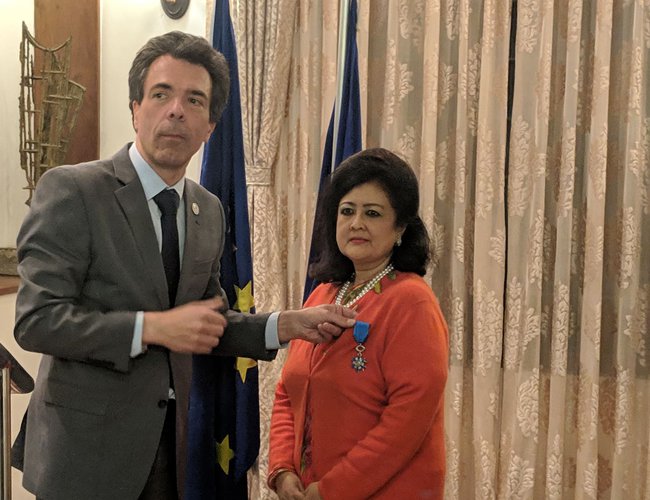 This honour is in recognition to her many years of selfless service to the Government of France.

During the award ceremony, Ambassador LEGER recollected the role played by Mrs Pandé during the tough period for the Alliance Française and how “she never missed a single meeting and always attended cultural activities”.

“To flag up some elements, I will say, for those who may not know, that Pratima Pande has a long history of relationships and friendship with the Alliance Française in Kathmandu. She was member of the board between 2001 and 2007, then vice president between 2007 and 2011, and, last but not least, president between 2011 and 2017,” said Ambassador François-Xavier LEGER.

“And, I would like to highlight the fact that, according to our friend Prabin Rana, she never missed a single meeting and she always attended cultural activities.She has been always very supportive to the Alliance Française team, and especially to the incoming new young director that we appoint here.”

“I really would like to commend that because,as all of us know, she has so many other duties, as president of the Nepal Britain Society, as member of the Kathmandu Valley Heritage trust, as honorary consul of Italy, and as a philanthropist.”

The French government’s honour Ordre National du Mérite (National Order of Merits) was instituted in 1963 by General Charles de Gaulle. It is awarded for distinguished services rendered in public, civil, military posts, or a private profession.

At a time when Nepal and France is celebrating 70 years of establishment of diplomatic relations, the time of conferring Pande the medal is very significant. Attended by people from different walks of life including diplomats, ambassador Leger also hosted a reception at the Residence de France. 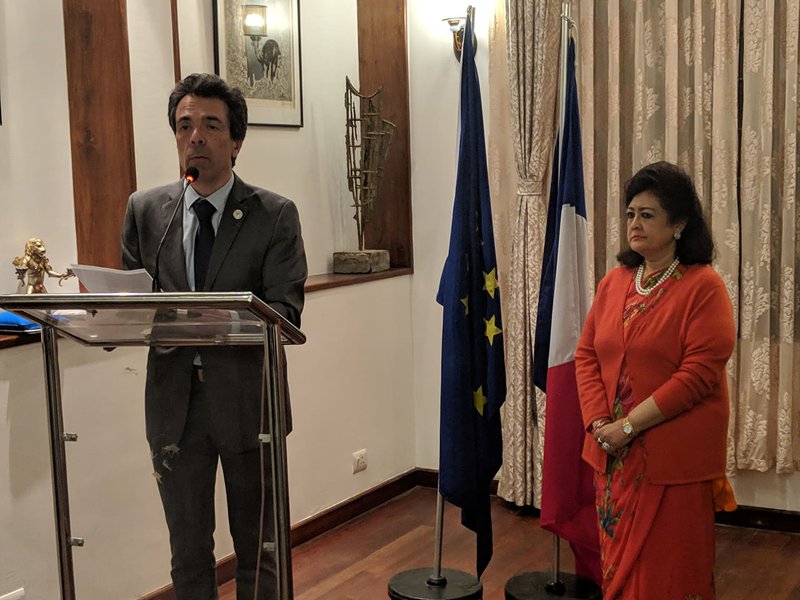 “ Today, I am very happy and honored to stand in front of you as this evening as the French Government is awarding the Knight of the National Order of Merit” Let me first brief you on the history and background of the Alliance Francaise. I would like to thank the French Government for awarding me the prestigious medal. This year we are celebrating 70 years (1949-2019) of Nepal France friendship. May this relation continue to prosper for many years and live the friendly ties between the two countries,” said Pande in her statement. ( See excerpts of the statement below).

“Today, I have the great honour and pleasure to confer on you a French honorary distinction, chevalierde l’ordrenational du Mérite, knight of the national order of Merit."

“First of all, let’s remind us some information about the history and the purpose of this honorary distinction. General De Gaulle,when he was elected as the President of the French republic in 1958,gave the instruction to establish the national order of Merit, with an aim to: Consolidate national unity, Harmonize and simplify the honorary distinctions: at that time we had more than 70 different awards, most of them invented by each ministry, with a lot of fantasy, so they did not have great value and create two national orders along with the Legion d’Honneur,” said ambassador Leger .

Historically, Pande’s family has a historical tie with France as her great great Grandfather Maharaja Deb Sumsher Rana welcomed the first oriental French Scholar Monsieur Sylvain Levi in Nepal and helped him to study Nepal. Thanks to acting support of Maharaja Deb Sumsher, Levy compiled a three volumes historical and scientific survey of the Kingdom, published in Paris in 1905 under the title Le Nepal. 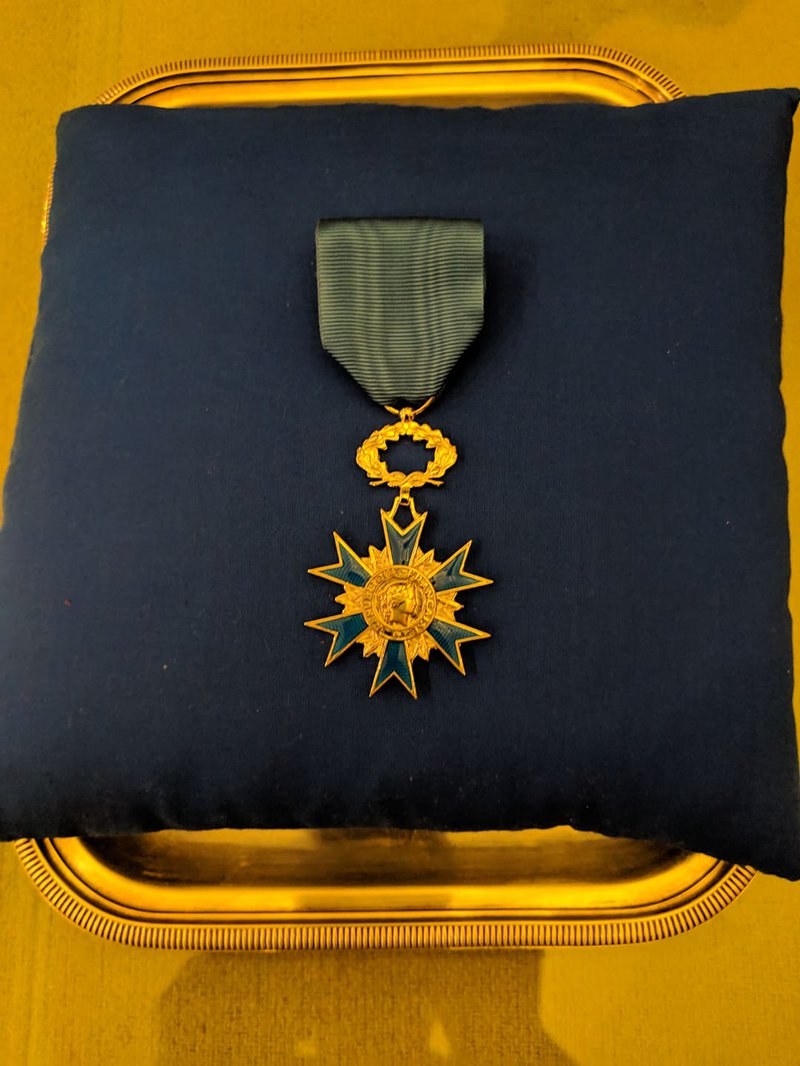 In his book, Note Book of Sojourn, Levy described Maharaja Deb’s knowledge in length including speaking French language. Lavi writes, “I was very impressed to note that that during interview Maharaja Deb quoted words in Sanskrit and spoke to the professor, in French about Sakuntala (well known dramatic story in Sanskrit), and conversed as an intelligent and well-informed person,” writes Levy.

Interestingly, Pande received the medal in presence of his father ninety one year old Himalaya Sumsher Rana, great great grandson of Maharaja Deb. Rana also confirmed Maharaja Deb understands of French. He was told by his father that Maharaja Deb was a student for some years in Dowson College, Calcutta where he used to spend many afternoons with poets and intelligentsia. 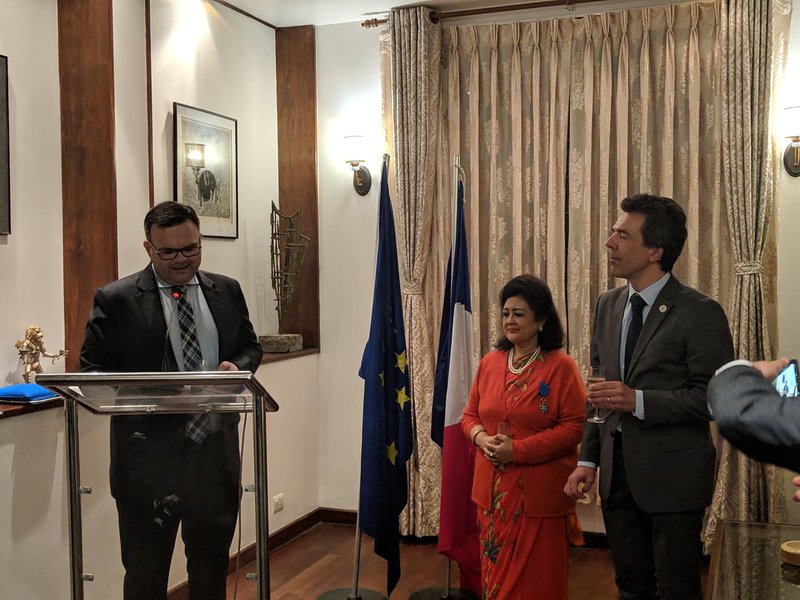 After taking first French joint venture bank of Nepal Indo-Suez Bank which is now known as Nepal Investment Bank, Pande’s husband Prithvi Bahadur Pande has successfully made it one of the credible and largest commercial bank of Nepal maintaining its predecessors’ credibility.

Today, I am very happy and honored to stand in front of you as this evening as the French Government is awarding the Knight of the National Order of Merit” Let me first brief you on the history and background of the Alliance Francaise.

Alliance Francaise or AF is an international organization that aims to promote the French Language and culture around the world. Created in Paris on 21st July 1883, its primary concern is teaching French as a second language in the former colonies and abroad and is headquartered in Paris.

In 2005, along with the British Council, Goethe Institute and the Italian and Spanish Language Institutes, the Alliance Francaise was awarded the Prince of Asturias Award for outstanding achievements in communications and the humanities.

Today, the Alliance has 1016 centers in 137 countries. The Alliance Francaise is 136 years old created by a group including Louis Pasteur, The diplomat Ferninand de Lesseps, writers Jules Verne and Ernest Renan and the Publisher Armand Colin. I would like to share some statistics about the AF in neighboring countries with 15 centers in China and 24 centers in India. Both are being large countries.

The AF was opened in Nepal in 1994 and its twenty-five years old. Besides teaching French language and culture, it organizes cultural events promoting intercultural dialogue and diversity. The AF welcomes 1500 students per year and creates a link between French and Nepali culture. Students who graduate from the AF have great job opportunities because of their French language fluency and work in hospitality industries, tourism, business and many other international INGOs like the United Nations and abroad.

Since 2002, I have been working for 16 years very closely with AF as a Board member and was also president for eight years. During this time, I have worked alongside many former French Ambassadors and directors to help guide and took part in board meetings. I also attended many cultural events such as Francophone, International Music Day, Gout de France events, musical, art and photo exhibitions, screening of movies, book launching and verities of other activities. Organized efficiently by AF, students, Nepali public and French speaking people took part in these monthly activities. This takes a lot of effort and planning and the staff work very diligently to make this all happen like magic. AF is a pioneer institution for starting film festival in Nepal. 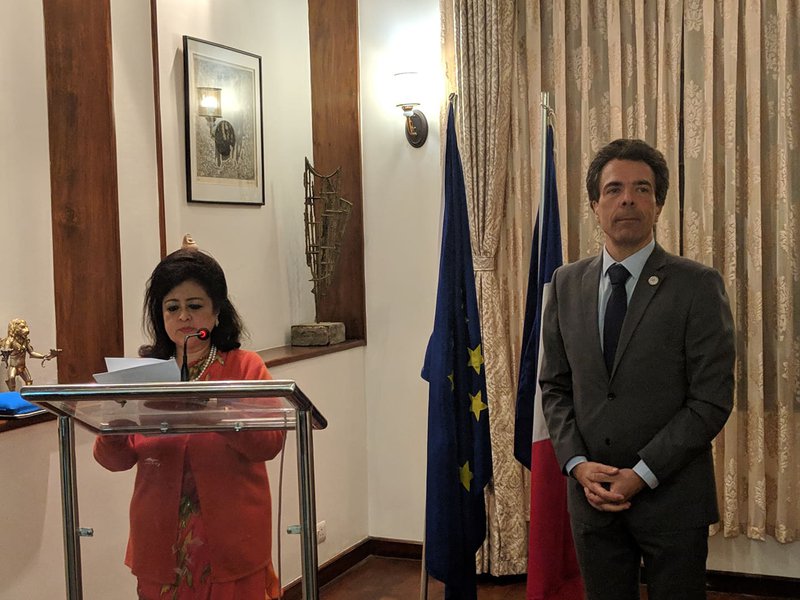 I myself was a student in early 1990s . I went to the AF, which was located in Bag Bazaar, for one hour everyday so that I could improve my speaking abilities. I had done A level French in the United Kingdom. When it came to speaking, there were inhibitions and not much practice. However, the teaching method in Kathmandu was such that I quickly shed my shyness and started to participate in the conversations because we had to speak in the classroom with all other students who were much younger than me whereas I was married with two children. I used the library facilities to watch French movies, listen to French music CDs in order to improve my language skills, getting recommendations from dear Mira didi who still works in the library today. Over the years, the AF had to change location many times and now we have a very nice center in Jawalakhel very close to St.Mary’s School.

I would like to express my admiration for all young directors from France who have come and gone over the years for their hard work, commitment, professionalism and dedication to the AF when they were working in Nepal. They have to get used to a new country, culture work ethics and still they excel at their work here in Nepal. Also all the former French ambassadors worked side by side with the AF and always gave their encouragement and support to the directors and the board members at all times. It was an experience and a pleasure to be associated with the AF and I certainly learnt too working as a team with the board members and the AF staff. I would like to thank the French Government for awarding me the prestigious medal.

This year we are celebrating 70 years (1949-2019) of Nepal France friendship. May this relation continue to prosper for many years and live the friendly ties between the two countries.

Excerpts of the statement delivered by Pande at the function.

Nepal Propose A Bill To Restrict Free Mobility Of Indian Citizens In Nepal By NEW SPOTLIGHT ONLINE 12 hours, 15 minutes ago

Japanese Support For the Capacity Building On Disaster By NEW SPOTLIGHT ONLINE 23 hours, 27 minutes ago