Universal Coverage Of Electricity In Nepal By 2030: Minister Pun 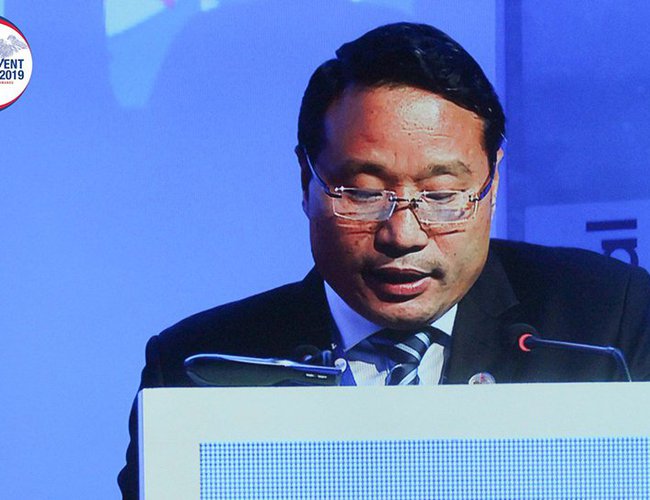 Minister for Energy, Water Resources and Irrigation Barsha Man Pun said that his Ministry has set ambitious targets in the power sector for the next ten years intending to provide access to 100% of the population through a mix of grid and off-grid systems.

He said that his ministry is implementing several transmission and distribution system reinforcement projects to be able to provide reliable electricity services to the people.

“Demand for energy is increasing globally. Despite efforts to develop clean sources of energy, fossil fuel is still a dominant source of energy. In this region, large numbers of people are yet to have access to electricity. If properly harnessed, Nepal’s potential for hydropower development can make a difference in correcting the energy supply situation in the region,” said Minister Pun.

“These targets can only be met with the involvement of and investments from the private sector; a good part of that is expected to be of foreign origin. We are well aware of the risks perceived and problems faced by different players in the sector. We have been devising various mechanisms to manage those risks and ease the problems from time to time,” said Minister Pun.

“I must tell you that we are keen on promoting the public-private partnership model in various forms. To this front, we have already announced a program called "People's Hydropower Program" to develop significant number of projects with a modality that ensures intense public participation. Through this process, we are able to pull together scattered resources for the equity financing, which is otherwise difficult to arrange.”

“Over the past couple of years, we have accelerated the pace of reforms in the sector. Even though it has been challenging to unbundle the sole public utility in the sector, we have been successful in creating a Generation Company and a Transmission Grid Company. Seven Distribution Companies are now being planned to be under the different provinces. Legal instruments are already in place for the formation of a Regulator in the sector. The Electricity Regulation Commission will become functional very soon. “

“We are committed to continue to reform the power sector and make sure that proper policy and legal instruments are in place. In essence, we are creating a favorable environment where concerns raised by all stakeholders are addressed properly and swiftly. First and foremost on our list is policy stability. We are also making sure that the tax regime and concessions provided to project developers are attractive,” said Minister Pun.

“Equity investment which can be generated within Nepal is limited; so is the case for loan investments as the amount of money Nepali banks can lend each year to the sector is inadequate for the development of larger projects. This clearly points to the need for Foreign Direct Investments in the sector. Even in the People’s Hydropower Program, which I mentioned earlier, we will need to seek a substantial amount of debt for several projects in this program; a good part of this is expected to be of foreign origin.”

“As most of you know, one of the basic policies of the Government of Nepal is to promote private investments in the power sector. To that end, we have highly investor-friendly regulations, which treat national and foreign parties at par,” said minister Pun.

“We have been successful to open up opportunities for access to power markets beyond our political borders. The Power Trade and Transmission Interconnection Agreement with India and Understandings reached with China as well as with Bangladesh for cooperation in the power sector have laid the foundation for cross-border electricity trade. These developments should give further confidence to prospective developers.”

He said that a transmission master plan has been prepared with the involvement of relevant entities in India. “Eleven high-voltage cross-border transmission lines between Nepal and India have been envisaged in this plan. The first line, namely the Dhalkebar-Muzaffarpur line is already operational and we are now moving fast to develop a second line.”

“Our ultimate goal is to have a regional or sub-regional interconnection. That is why we are signatory to the SAARC Framework Agreement on Energy Cooperation, and also party to the Understanding reached for establishment of the BIMSTEC Grid Interconnection. Eventually, such sub-regional or regional interconnections should help us to optimize our power systems and lower the operating costs. In fact, it is not just bilateral trade, which will be facilitated by the cross-border lines; we can have trilateral or other arrangements, which can be worked out at the private or government levels.”

“To sum up, we are gearing up to take up attractive projects in different size ranges. Requirement of equity investments as well as debt financing for these projects will be substantial. As you know, one of the objectives of this Summit is to showcase potential projects in different sectors. As I said earlier, the government is moving ahead with ambitious targets in the power sector. In fact, our plans and programs are almost taking the shape of a campaign for aggressively harnessing Nepal’s hydropower resources. On behalf of my Ministry and the Government of Nepal, I urge you to be a part of this campaign in whatever way you can.”