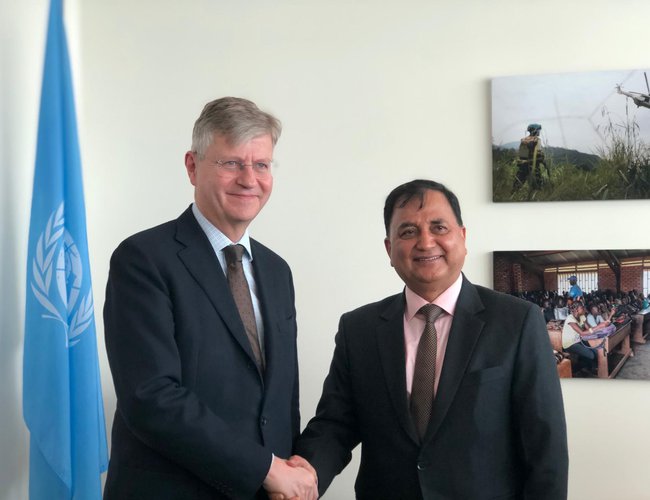 Deputy Prime Minister and Minister of Defense Ishwar Pokhrel expressed his hope that a renewed collective commitment of the UN member states would help peacekeeping missions deliver effectively on their mandates. He also raised Nepal’s concerns on ensuring safety and security of peacekeepers for enhancing their morale as well as performance.

He held a meeting with the United Nations Under-Secretary-General for Peace Operations Jean-Pierre Lacroix this afternoon. During the meeting, the two sides discussed the issues related to the UN peacekeeping, including its critical role in the prevention and resolution of conflicts in the areas of its deployment.

Both sides concurred that the participation from the troops and police-contributing countries at the senior positions, both at the UN headquarters and fields, would enhance the efficiency and effectiveness of the UN peace operations in maintaining international peace and security.

During the meeting, Amrit Bahadur Rai, Permanent Representative of Nepal to the UN and other Nepali officials accompanied the Hon. DPM and Minister of Defence while UN Under-Secretary-General Lacroix was accompanied by UN Military Adviser Lieutenant General Carlos Humberto Loitey and other high officials of the UN.

Later in the evening, Deputy Prime Minister Pokhrel attended an interaction program with the Nepalese business community organized by the Consulate General of Nepal in New York.

DPM Pokhrel is scheduled to attend an interaction program to be organized by the Nepalese community residing in New York, tomorrow.