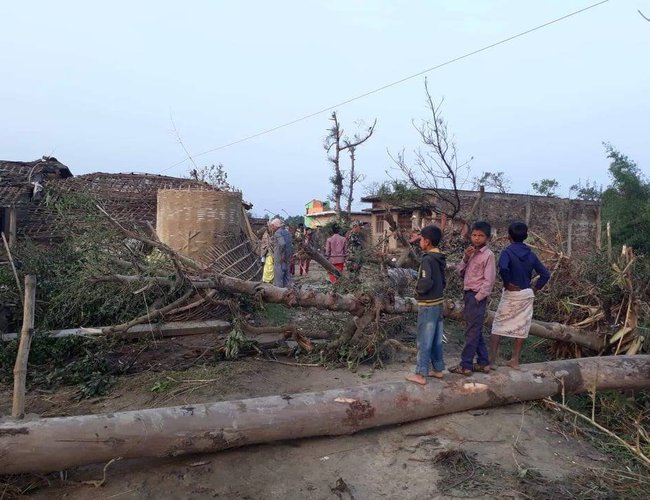 Although Nepal Electricity Authority (NEA) restores electricity supply in district headquarters of Bara, the storm has badly damaged transmission line and distribution lines. However, the maintenance is going on to restore the supply of electricity in Birgunj.

Despite large scale devastation, there was no casualty from electrocution. Expressing sadness over the loss of lives of its customers, NEA has also extended heartfelt condolences to the bereaved families.

Under the Kalaiya Distribution Center, NEA said 1000 to 1500 poles collapsed and electric wire break. However, the substation of Kaliaya was charged through Chandranigahapur Sub-station.

Although we have yet to receive the exact cost of total damage, initial report showed that the storm damaged 2000 poll, hundreds of transformer, it is estimated that there will be Rs.100-150 million equivalent damage.

“As maintenance for the restoration has been going on, NEA will restore the electricity supply as soon as possible,” said Adhikari.

Ethiopian Renaissance Dam Controversy: Egypt And Sudan For More Negotiations On Flow of Water In Nile By Agencies 2 weeks, 5 days ago

Bhutan Looks At Renewable Energy To Meet The Demands In Winter By NEW SPOTLIGHT ONLINE 3 weeks, 2 days ago